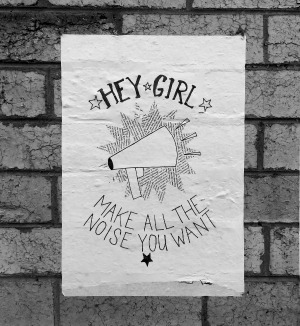 Is the NHS failing women with autism? (The Guardian)

Interview: Neneh Cherry on a New Brand of Feminism in Pop Culture (The Village Voice)

‘Ched Evans has served his time’ – and other common misconceptions about the convicted rapist footballer: A handy rebuttal guide (Independent)

We think the Paris terrorists were offended by Charlie Hebdo’s satire. What if we’re wrong? (Telegraph)

What’s Up With Dudes Not Being Able to Give Compliments? (Crunk Feminist Collective)

Russia says drivers must not have ‘sex disorders’(BBC)

Listening to the Living and the Dead: Ruminations on #justiceforLeelahAlcorn (Autostraddle)

Why is society’s idea of beauty so often either ‘white or light’? (Media Diversified)

Image shows a back and white poster attached to a grey brick wall. There is a drawing of a megaphone on the poster. The words read “Hey Girl make all the noise you want.” Picture by Flickr user retrokatz, used under a Creative Commons Licence.