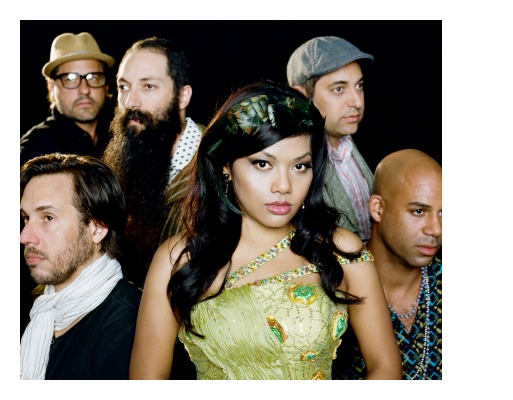 Helen Monks spoke with Chhom Nimol, singer with Dengue Fever, and Senon Williams, bassist, by conference call in late January. She relays their discussion below.

When Chhom Nimol, lead singer of the Cambodian/US group Dengue Fever, was first approached by brothers Zac and Ethan Holtzman, she spoke very little English and relied on her sister to translate. She recalls: “My sister did not trust anyone. She said, ‘No way. I don’t think you can go with these guys. I think maybe they lie to you’. She tries to protect me because I’m younger. She’s like my mum. She just wants to protect me and make sure I do the right thing.”

At the time, Nimol was working as a singer in a club called Dragon House in the Little Phnom Penh area of Long Beach, Cambodia, the place that four years later inspired the album title Escaping the Dragon House. The Holtzman brothers were looking for a Cambodian vocalist to join their band and thought Nimol would be the perfect fit. Prior to this, Ethan had travelled around Southeast Asia and become fascinated by the sounds of the psychedelic music coming out of Cambodia in the 1960s.

“The whole idea was for [just] one show,” Senon Williams, the bassist of Dengue Fever, explains. Williams went to college with Zac and had also discovered Cambodian music for himself whilst travelling a similar path to Ethan’s in the mid-1990s: “I was in a taxi cab, and the taxi [driver] was playing this kind of 1980s new wave, but all Cambodian covers, some Rolling Stones were thrown in there. It was really funny… and I went, oh man I want to find music like that”.

Senon continues: “Zac was working for a Hollywood director who had a really crappy band. That director wanted to put on a concert for himself. So Zac was promoting a concert, just so this director with his crappy band could play a show. The idea was just to get this band together for that one show, you know, kind of a fun thing. So, we started rehearsing, we wrote a few songs, then that show fell through. But we were like, well, we’ve got this thing going, we should do a gig. So, we booked a gig at a local club called Space Land in Los Angeles…and ever since then, we’ve just kept going.”

“Their marriage of US indie rock and traditional Cambodian vocals is fresh, unique and wholly satisfying”

When Nimol and Williams explain how Dengue Fever was formed, they make it sound like a series of happy accidents. This also seems to be the case with the sound of their music. While Cambodian music is becoming increasingly influenced by western sounds, here is a Los Angeles-based band, predominantly composed of North Americans, who openly cite traditional Cambodian music as a defining influence. Their marriage of US indie rock and traditional Cambodian vocals is fresh, unique and wholly satisfying. Part of their ability to take risks and try out brand new sounds comes from being truly independent and unanswerable to a record label.

“Yes, freedom” Williams agrees. “No matter where we point, we point at ourselves. And that works.”

While Williams explains the boys’ interest in the influences of Cambodian music – “We all knew about ‘tropicália‘… Thailand, Turkey, all throughout Africa, they all have this music from the 1960s and 1970s” – Nimol doesn’t hesitate to name her favourite singer: “Celine Dion. I remember when I was younger, listening to ‘The Power of Love’ and it blew my mind.”

“I was young when my family pushed me so bad. My older sister, she’s a singer. She’s a good singer. She’s famous from the 1980s until right now. I’m the youngest and my family pushed me. They said: ‘Your sister’s got a good voice, you should follow her and listen to her and become a singer’. I didn’t want to be a singer when I was young. I wanted to be an actress. But I started to become a singer in 1997, after I won the Cambodian version of American Idol. I was the best female singer in 1997, so that’s why I became a singer.”

“We never set out to be ‘that political band’. We’re embracing it, though”

Alongside making music, Dengue Fever work with Cambodian Living Arts. They collaborated with the organisation on the making of the bands’ documentary Sleepwalking Through the Mekong on their first international tour and have been involved with them ever since. In 2010, the band released a compilation of all the music that inspired them called Electric Cambodia. The songs featured were Cambodian rock tunes from the pre-Khmer Rouge era. Half of the proceeds of this album go to Cambodian Living Arts.

“The whole idea of our band, initially, was to enjoy ourselves and have a good time. But all of this cool stuff and a lot of the benefits, the things we’ve been able to do to help, to give back to different communities, it’s kind of a happy accident in a way. We never set out to be ‘that political band’. We’re embracing it, though” states Williams.

With the recent launch of their fifth album, The Deepest Lake, I asked Nimol what her sister thinks now, after her original scepticism. “Now, she says: ‘OK.’ Now, every time I talk to her, she says, ‘OK, sister. Now I understand, if you work hard, I’m pretty sure you’re going to have success coming.’ She sees I work hard. I work harder than I would in a Cambodian band.”

Williams agrees and explains: “When we met her [Nimol] she was singing in a supper club, where there were six singers. So, she’d sing one number then she’d go off stage, have a little dinner and a drink, then she’d come on and sing another song. With Dengue Fever, she sings an hour and a half straight. No rest.” Nimol laughs: “No time to hang out with friends downstairs!”

“In Cambodia,” she adds, “You only sing in the country. It’s small. In the West, you can fly anywhere you want. You can see different worlds. You can see different bands. I told my sister, I said, ‘You never know what a big world it is. They have amazing sounds.’ I can see it now. When I’m travelling with the band.”

I asked Nimol and Williams what we should expect from the album. They replied, simply: “45 minutes worth of passion”.

Dengue Fever’s new album, The Deepest Lake, is out now.

The image at the top of this piece is a group shot of the band Dengue Fever. Singer, Chhom Nimol, looks into the camera, resplendent in a green, decorated dress, with further green decorations in her hair. She is surrounded by her fellow band members, who are looking away from the camera. Two members sport hats, one an extensive and impressive beard, another a bald head and necklace and the final member, a stylish white scarf. Photo by Lauren Dukoff, courtesy of Prescription PR.

Soon to play mini-Moran in Caitlin Moran’s new sitcom for Channel 4, Helen also sometimes writes down opinions about stuff. You can find some of them here and, occasionally, here.