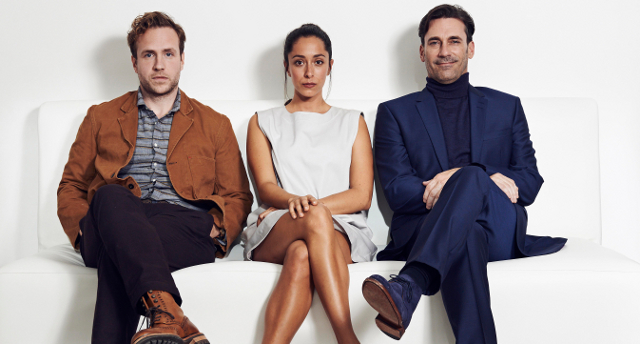 What role does gender inequality play in how we approach issues of privacy and autonomy? D H Kelly follows Gemma Varnom’s Black Mirror review with an examination of the blocking theme in the show’s most recent episode.

Mild spoiler alert for those who haven’t seen this episode.

Charlie Brooker’s most recent Black Mirror drama, ‘White Christmas’, aptly demonstrates a gender divide in the concerns we might have about technology; men are afraid of being ignored, while women want to be left alone.

The episode is set in the near future, where most people have volunteered to be implanted with Z-Eyes, an augmented reality device that works like a permanent smartphone in the user’s head. One application of this is that you can ‘block’ someone from your field of vision; they are reduced to a hazy shape, with their voice muffled beyond recognition. Neither party can see or hear each other, even in photographs or recordings. As Matt (Jon Hamm), says, “It usually only lasts for, like, an hour, but when they leave it going… Price of progress, I suppose.” Over the course of ‘White Christmas’, we learn that both protagonists, Matt and Joe (Rafe Spall), have been subject to this treatment by ex-partners.

This is a cruel idea and the ultimate use of the technology is especially nightmarish. And yet, compared to Black Mirror‘s other dystopian extensions of the way we live now, it struck me that this particular device could have a gloomy appeal to many women, who might be more concerned with peace and privacy than the need always to be seen and heard.

The ubiquity of social media has changed the way we withdraw from failed relationships. Old love affairs are no longer confined to a box in the attic; photographs, memories, announcements and even flirtations between a couple may now be archived and tagged on Facebook, where we might go every day. When once, only a handful of people might have had to navigate remaining friends with both parties after a split, a couple may now be connected by a vast network of close and casual friends online. And these connections are very close at hand, threatening to haunt us any time the phone vibrates in our pocket…

Call for reviewers! We’ve now covered ’15 Million Merits’, ‘White Bear’ and ‘White Christmas’. Would you be interested in writing about any of the other Black Mirror episodes? If so, get in touch through tv AT thefword DOT org DOT uk!

The characters Joe, Greta and Matt (left to right) sit cross-legged on a white sofa that blends with the stark white background behind them. They cast a slight shadow behind them. Greta and Joe look serious, while Matt is smiling. Joe wears a brown jacket, with a grey and brown striped polo shirt, navy trousers and brown boots. Greta wears a white shift dress. Matt is dressed all in navy (suit, polo shirt, visible socks and boots). Picture from Channel 4 website, used under fair dealing.