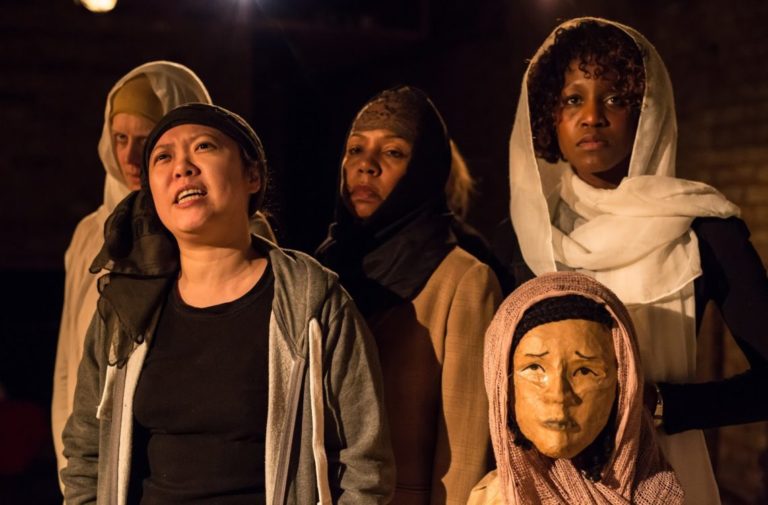 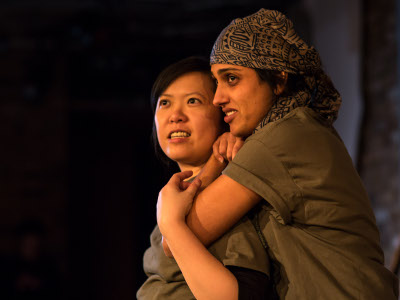 I really wanted to like The Singing Stones but was sadly disappointed. Produced by Mama Quilla, whose aims include spotlighting human rights issues and making invisible people visible, it’s described as a “triad of short plays, each offering a poetic, fearless and sometimes funny exploration of women and the Arab revolution”. We rarely hear the stories of the thousands of women who took part in the Arab spring and The Singing Stones certainly goes some way towards remedying that but, for the most part, I think it missed its mark.

Although described as a triad of plays, the longest of these, The Women’s Spring, consists of six separate scenes set across the Arab world, plus one scene in a living room in Camberwell. Each includes different characters with different stories. As such, three apparently separate plays feel more like eight distinct vignettes. This means that we never focus on one story long enough to fully absorb its significance. Instead, it often feels like we are only skimming the surface of a character or country, rather than gaining any particular insight into the experiences of the featured women. The stories matter and need to be heard, but they feel rushed and incomplete in this somewhat choppy production.

While each of the individual segments alone feels too short, the performance as a whole, at a running time of over two hours, felt much too long. This may well have been because we did not have any individual characters or storylines to maintain an emotional interest. The material was often harrowing, recounting the bodily violations forced upon many Arab women, which, while necessary and no doubt representative, was also quite draining.

The plays seek to highlight the strength of the women who protested during the Arab Spring – portraying them as more than passive bystanders to the political upheavals that broke out during 2011. We see them defying male soldiers, supporting one another and forming opposition groups. Their resistance takes many forms, from singing, an act seen to be coherent with femininity in many places, to becoming fighters themselves, which is much more gender non-conforming. And yet, perhaps because of the constant spectre of violence, the main impression I was left with was one of the women as victims.

It might be that the playwright wished to truthfully acknowledge the oppression that many Arab women have faced and celebrate their ability to find strength in such situations. But although these women’s resistance to oppressive regimes shone through, I couldn’t help feeling that the women were completely vulnerable, their lives dictated by the violence of the men around them. Given that its aim is to celebrate these women, this feels undermined by the overwhelming sense of victimhood.

While most of my criticisms of this production are rooted in the writing – the cast were energetic and adaptable and the intentions of the playwright commendable – I found the scene set in Camberwell to be problematic. Perhaps intended as humorously self-aware, it presents us with Gaia, a white British middle-class woman who wants to produce a play about women and the Arab Revolution. One of the guests at her house, Alia, is an artist who has been tortured in Syria. Gaia is trying to persuade Alia to appear in her play, which will also include Gaia’s sister and an older Scottish actress. Alia asks why the piece is not being cast with refugee women from Syria and Libya and is told that they “don’t have the skills”. In response to Alia’s concern that Arab actors are not being used, Gaia explains, “I think the themes are universal. I think it might rein in the piece. I want it to speak to everyone.”

This feels too much like self-conscious justification of the actual cast – only one of whom, out of a cast of nine, is of Arab heritage. In a play that almost exclusively features Arab female characters, it would have been distinctly preferable to have Arab women acting on stage. Mamma Quilla is unique in attempting to give opportunities to under-employed performers, particularly older women, so the choice is hard to understand.

There are moments which stand out for their power and impact, but as a whole the production lacks any real punch 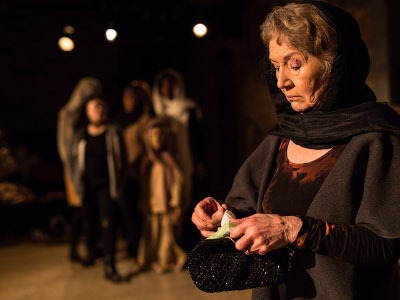 One of the unique delights of the production is that all three plays make use of puppetry extremely effectively. For the middle play, a child-sized puppet represents a young girl named Ru’yah in each scene. Ru’yah has a real presence, even among the nine human actors on stage. She represents a little girl, who is forced to witness unbearable horrors. Her mother seeks to protect her, to shield her eyes and ears. But we are left with the impression that this young girl has already seen and experienced a level of trauma which she will never recover from and that little girls like Ru’yah are suffering from Tunisia to Libya, Egypt to Syria.

Overall, there are moments which stand out for their power and impact, but as a whole the production lacks any real punch. We are left with an overwhelming sense of violence but not much else. This is a shame given the subject matter and impressive efforts of the cast. I will definitely seek out Mama Quilla productions in the future but sadly will not be recommending this one to any friends or family.

The Singing Stones is showing at Arcola Theatre until 28 February.

Photos are by Mia Hawke and are from the production.

Feature photo: A group of four people, with a fifth figure who is a puppet. They stand in a group; the three at the back look silently ahead, looking grimly determined, while the one at the front seems to be saying something. All wear neutral colours and a variety of head coverings.

Photo 2: Two women embrace as they face the same direction, with the woman at the back holding the woman at the front, her arms wrapped around her. Their faces are close together, cheek to cheek – they appear close. They are looking at something in the middle distance out of shot, looking a little apprehensive. Both wear olive green tops; the woman at the back wears a patterned scarf on her head.

Photo 3: In the foreground, an older woman holds a black sequinned bag or purse – she appears to be looking at something she is taking out or putting in. She wears a dark red top, a loose grey coat and has a black scarf draped loosely over her hair. There is a group of figures out of focus in the background.

When Shoshana isn’t enjoying London’s theatre, she can normally be found reading or ranting about feminism and contemporary political issues. That, or eating too much cake