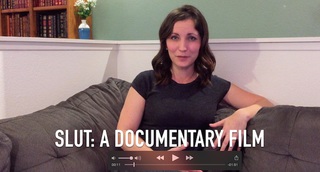 This is a guest post by Emily Lindin, co-director of Slut: A Documentary Film

After hearing about the death of Rehtaeh Parsons in 2013, I started The UnSlut Project by blogging my own diary entries from when I had been labelled a “slut” in middle school and considered committing suicide. The project has since expanded into a supportive online community where people from all over the world can share their experiences overcoming what is often called “slut shaming”. The UnSlut Project’s goal is to inspire cultural change through personal story sharing and, most importantly, to reach girls who need it with the message that they, too, can survive and go on to lead full, successful lives.

Emily Lindin talking about her project

Finishing Slut: A Documentary Film and sharing it with as broad an audience as possible is an important part of reaching that goal. We have now launched a crowd-funding campaign on Seed and Spark to raise $30,000 for post-production of the film that tells the story of Rehtaeh Parsons, the Nova Scotia teenager whose suicide compelled me to start The UnSlut Project back in 2013. She had been gang raped a year and a half earlier by her classmates and labelled a “slut” as a result. Despite transferring schools many times, she could not escape constant cyber harassment and in-person bullying. Rehtaeh’s is not the only story like this to make headlines in recent years. In many developed countries, we assume women have achieved equality in almost every way. So why is the sexual shaming of girls and women, especially sexual assault victims, still so prevalent?

Slut: A Documentary Film features conversations with those who have experienced sexual shaming, including the family and friends of Rehtaeh Parsons; Samantha Gailey Geimer, who was publicly shamed by the media after being sexually assaulted by director Roman Polanski at the age of 13 in 1977; Gina Tron, who wrote about her experience being shamed out of pursuing charges against a serial rapist in Brooklyn, New York; N’Jaila Rhee, who coped with her sexual assault and the subsequent loss of support from her family and church by reclaiming her sexuality as a “cam girl”; and Allyson Pereira, who was ostracized in her New Jersey town after texting a photo of her breasts to an ex-boyfriend.

Through interviews with sexuality experts, advocates and media figures, the documentary explores the causes and manifestations of sexual shaming in North America and offers immediate and long-term goals for personal, local, and institutional solutions, looking toward a world where sexual assault victims get the support they need and where the word “slut” doesn’t even make sense as an insult.

In August 2013, with the help of WWE wrestler and feminist activist Mick Foley, we used Kickstarter to raise $19,578 for production of this film. Over the past year and a half, directors Emily Lindin and Jessica Caimi have filmed all over North America, although the issues of “slut” shaming and sexual bullying are, of course, international. Their goal with this film is to continue the tradition of personal story sharing that has been a part of The UnSlut Project ever since Emily first shared her middle school diaries online. Now they need your help to turn all this amazing footage into the best film possible! If they don’t raise at least 80% of our goal by February 20th, they don’t receive any of the funds, so your help is much appreciated!

Please donate and spread the word!