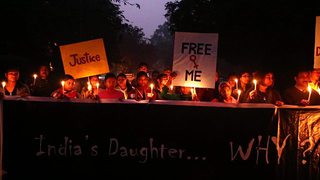 This is a new round-up to ensure those who follow us via RSS are made aware of all of the articles we post on our website – it’s also an excuse to re-share the many awesome features and reviews from the past month!

The following links are all to articles published during March.

This Comedian is a ten year retrospective of Idil Sukan’s work in comedy photography. Hannah Dormor finds its insight into identity dazzling.

A vault of potential

Pamela Edwardes makes the most of VAULT Festival, with its diverse offerings of productions fronted by women.

Holly Combe has a listen to Brains of Britain and talks to Ste McCabe about DIY touring, fab feminist girls in the 1990s and coping with the divisive tactics of biscuit-hogging bullies in 2015 Britain.

Dawn Kofie appreciates Laure Berthaud, Spiral’s “feminist anti-hero” who isn’t afraid to bend the rules, but is disappointed by the predictability of some of the character’s personal choices.

Asiya Islam finds India’s Daughter, The BBC documentary on the 2012 gang rape in Delhi, neither educational nor challenging and suggests we question its purpose.

How to Create a Magazine for the People: an Interview with Hanna Hanra

Stephanie Phillips talks to Hanna Hanra about her vision for the independent publication BEAT and her experiences as a DJ and music enthusiast.

Put a record on, make a connection

“I haven’t been serious about anything since 1918”

Scene of a candlelight vigil at dusk, with a mixed gender group of around 20 people in the discernible area and a glade of trees behind them. There are two fully visible placards (left to right): one is yellow with ‘Justice’ in maroon letters and the other is white with ‘FREE ME’ in black capital letters, with those two words separated by the female symbol in red. A black barrier in front of the people bears the words “India’s Daughter… WHY?” in grey/white. From BBC site, shared under fair dealing.