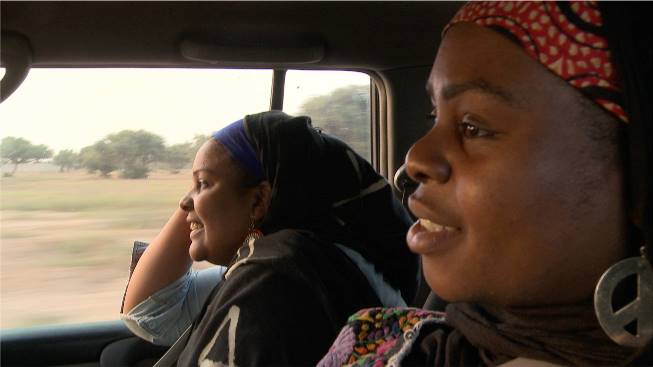 Two years ago documentary filmmaker Mette Reitzel blogged for us about the fascinating project she was working on at the time, inviting The F-Word readers to contribute to the film’s post-production.

Fast forward to March 2015 and Hip Hop Hijabis is ready!

Earlier today, it got a special preview screening followed by a Q&A at Bradford International Film Summit. A 25-minute cut of the film will be broadcast on Al Jazeera English as part of their Witness strand on International Women’s Day, 8 March, at 10:30pm GMT. It will be repeated a few times the same week and be available to view on their website afterwards.

Poetic Pilgrimage on the road (from official FB fanpage)

Hip Hop HIjabis is a musical road movie following two best friends and Muslim converts, Sukina and Muneera of the Hip Hop duo Poetic Pilgrimage, on their quest to spiritually reconcile their new faith with their feminist sensibilities and Jamaican roots. As they tour the UK and Morocco, the varied reception to their performances provides a candid, and perhaps surprising, snapshot of contemporary Islam, where some believe music and female performance is forbidden while others share their passion for music and creativity. A universal story about friendship, love and idealism… and two young women finding their place in the world. Poetic Pilgrimage are releasing three new tracks in conjunction with the film.

The film was produced by Faction Films.

You can get more information from the film’s Facebook page.