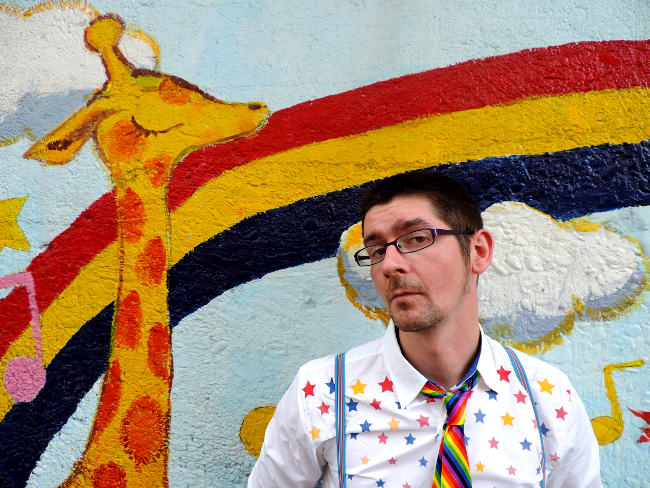 You shop there, I shop there too
You want one, I want one too
If you say so, I think it’s true
That’s what normal people do

My introduction to the music of queercore punk Ste McCabe came in the form of the playful but scathing ‘Accessorise’ on his debut album, Bad Kitty. I loved its critique of the blandness and conformity pervading British life today, while the damning judgement of aspirational values inherent in ‘Did You Really’ (“You worked your way up from the bottom”) seemed to speak directly to my frustrations about the politics behind it all. Then there was alienation anthem, ‘Harrowing Breakdown’: a reminder of the mental health impact of living under a government that values business transactions over people (and would actually sooner see disabled, unemployed, economically inactive or low-earning people dead than taking state ‘handouts’). These tirades were calling bullshit on a system seemingly intent on convincing us, the masses, to forget our dreams and put all our energy into kissing the arses of those with power in the hope that maybe –just maybe– we could grow up to one day be just like them. If they let us. If we’re good.

Recent album, Brains of Britain continues in that vein, with the following monologue from Billy Bragg:

Posh public school boys running our country
Bullingdon club bullies who make the poor pay just because they’re poor
And all the while their mates in the city of London are making millions…
…A banker, a worker and an immigrant are sitting around a table
On the table there are 12 biscuits
The banker scoops up 11 biscuits for himself and says
“That immigrant wants to steal your biscuit mate.”

As well as highlighting attempts from those with privilege and power to get us all fighting amongst ourselves, the album also touches on themes such as stuffy snobbery within political activism (“All the kids are middle aged… Sorry if I’m not WHAT enough by whatever measure you just made up”) and taking creative risks:

Meanwhile, Ste also addresses homophobic bullying and aptly captures the corner that bigots frequently back their targets into:

On a lighter note, I must add that the track this particular lyric is taken from, the rather catchy ‘Don’t We Have Nice Hair?’, would be perfect in a set alongside Martha and the Muffins and Those Dancing Days, while ‘Chinless Wonders’ has a great little slap bass moment that leaves me reaching for my jazz-funk collection. (Apologies to anyone who might find that icky, but jazz-funk and punk are totally compatible as far as I’m concerned; mutant disco anyone?)

There is certainly much more that could be said about the album and gigs to accompany it, but I’ll hand over to the Q&A with Ste now and let his answers do the talking…

Ste McCabe (right) stands in front of a wall decorated with graffiti depicting a giraffe and a rainbow (left). He wears a white shirt with stars on, stripy braces, a rainbow tie and glasses. He lightly turns his head towards to his right and looks at the camera in a challenging and quizzical manner.