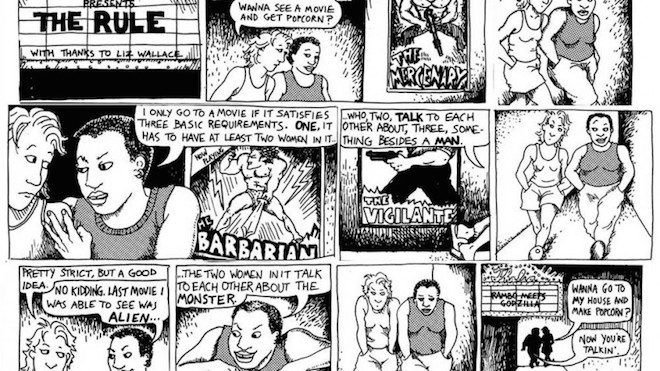 March just keeps on giving and I would like to make an addition to my previous feminist films post.

It’s been 30 years since Alison Bechdel came up with ‘The Rule’, a comic about women and the movies, starting what is today known as The Bechdel Test:

Corrina Antrobus, film critic and a freelance Movies editor for Virgin Movies, is the driving force of The Bechdel Test Fest, an all-year celebration of the Tests’s 30th birthday and a great opportunity, she says, to showcase films that not just pass the test but do so “with flying colours”. With a degree in Media Production and Performance, Corrina is interested in how onscreen representations of people shape our opinions. She contributes regularly to Virgin Movies blog, London Economic and The Huff Post and can be followed on Twitter @corrinacorrina.

I met Corrina for a lunchtime chat to find out more about her current project.

The Bechdel Test is 30 this year, why do you think it’s still relevant?

The test is old but it’s not making as many waves as it should be. If it wasn’t the Bechdel Test, it would be something else, something that highlights and contextualizes the issue of how male-dominated mainstream cinema really is: just look at the Oscars. Of course, we should discuss what to do with the test as we’re going forwards: it is ambiguous, perhaps flawed (it doesn’t say if the film is good or not) but it starts the conversation. That’s the ultimate reason for the festival, after each screening we will have a Q&A where we will talk about the film and why we need more films with interesting female leads.

Our second strand will be different from the opening event Reclaim The Rom-Com in February. It will be almost a week of screenings, from 23 to 26 March, while the first one was a one-day affair. We have four films that I believe fit really well in the category of representing women as positive, interesting, inspiring leads. I wanted to make sure there were British films in there (Fish tank), American films (Tiny Furniture and Appropriate Behaviour), foreign language films (Wadjda). It is a happy coincidence that each film is also directed by a woman so we can show women who are making films that pass the Bechdel Test with flying colours. The Fest is in no way anti-men, of course, and there are plenty of male directors who hail women’s stories: please, bring it on!

The coming-of-age programming reflects the target audience of my partners Cinemania and Picturehouse. It was a bit of a restriction but I am very happy with the outcome: all heroines, not only Wadjda who is the only real child here, are “little women”, they’re all going through ‘young times’ of their lives. 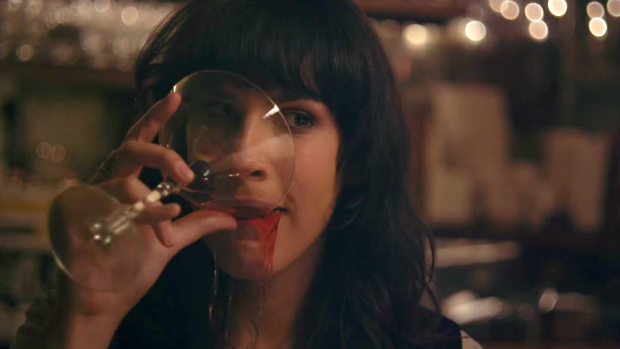 What are your plans for the rest of year?

I’ve had four main things planned but there’s plenty of room for other ideas, depending how much time I have and whether I secure funding. After Reclaim the Rom-Com and Little Women, Big Stories, next thing is to show in September the short films submissions we’ve been receiving. I’d love to collaborate with Underwire fest, I love what they do. I also want to hold Alison Bechdel’s birthday party on 10 September. Finally, we’ve got The Horror Harem, around Halloween, on female representation in horror. The genre is notorious for being misogynistic and I feel it’s a great excuse to highlight the positive, exciting female roles that are actually quite empowering, not just girls in white T-shirts running around in panic. We have a confirmed partnership with London Fields Free Film Festival who will take care of the logistics, which I’m really excited about.

Ellen Tejle, Swedish activist who introduced a film rating system based on the Bechdel Test, says: “The A-Rate is consumer information meant to raise awareness regarding gender bias on the screen by highlighting the ones with some female presence.” Do you think it should be introduced in the UK too?

During the last UnderWire fest, I hosted a panel discussion with Ellen, who was lovely and came to London to join the discussion. I think the A-rate is another fascinating use of the Bechdel Test and the branding that takes the conversation further: should we classify films based on female representation? Bath Film Festival went even further and created the F-rate. While A-rate means only that the film passes the Bechdel Test, “F” of the “F-rate” stands for “feminist”. I wouldn’t want to be in that position, to decide whether the film is feminist or not; my idea of ‘feminism’ can be different from somebody else’s.