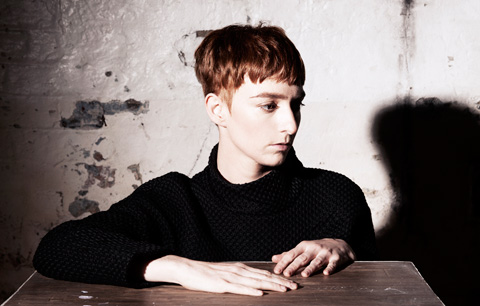 Put a record on, make a connection

24 February 2015, Islington. The post-industrial trappings of Electrowerkz have been expertly selected. Stephen Mallinder of Cabaret Voltaire DJs in a cardie, eyebrows less sculpted in middle age. There is facial growth too. He’s even what you might call cuddly, but he keeps everyone’s feet tapping in anticipation. Throbbing Gristle’s ‘Hot On The Heels Of Love’ emerges from the gloom, its occult spindle ‘n’ thud deeply right for what will soon follow.

Enter LoneLady aka Julie Campbell from Audenshaw, windswept East Manchester. “Baby steps”, she says of her return to touring, on the cusp of releasing her second album Hinterland, but no description could be more self-deprecating. From the moment the live band take the stage, there’s a feeling of precision accompanied by the kind of seemingly effortless gestures that only bloody hard work will produce. “Oh my god”, a star-struck voice calls out from the crowd as Campbell combines form and function at the conclusion of a song, damping her guitar strings and striking a still-life pose in one svelte motion.

The same care and attention is evident on the new album. Recorded by Campbell in her Hulme tower block flat – the “concrete retreat” – and produced amid the urban wreckage of the American Rust Belt, it achieves the feat of sounding both intricately wrought and deeply, heart-wrenchingly affecting.

‘Into The Cave’ opens the set, as it does Hinterland, and suddenly a small patch of North London is encompassed by an unmistakeably Mancunian psychogeographical soundscape. This is home territory. Echoing drums evoke psychic chasms. Interior becomes exterior as you close your eyes and imagine yourself in an underpass built over the same roiling miasmic River Irk once traversed by Engels. Accompanying a bass-line that could be snaking from the foundations of the long-demolished Russell Club, Campbell’s vocals, alternately brooding and soulful, conjure up these “detailed transfers” between the labyrinths of mind and backstreets, summoning skeins of glowering synthesiser.

Current single ‘Bunkerpop’ follows, its razor-wire guitar binding Manchester’s postwar housing projects to the haunting atmospheres of Paul Virilio’s 1975 text Bunker Archaeology, in which the French writer exorcises the childhood trauma of Second World War aerial bombardment by photographing the weird, amorphous concrete fortifications built by Nazi forces along the western seaboard of Europe. ‘Bunkerpop’s monochrome video sees Campbell exploring these monoliths, lit noir style as she runs her hands over their surfaces, searching for presences. “Put a record on, make a connection,” the song prompts, accompanied by a restless buzzing that threatens to transmit voices from the aether at any moment. “I’m not alone, I’m not afraid/there’s more than one way to communicate.”

There certainly is. Live, the hip-shaking rhythms of the new album animate the committed enthusiasts that make up the crowd, with their Factory Records bags and Section 25 t-shirts. Occasional shades of A Certain Ratio and Movement-era New Order do not, however, suggest the empty recycling so prevalent in today’s pop landscape. Instead, Campbell takes up where the boy’s club of Factory left off, proving that this legacy offers more than the marketing of city centre flats and student halls.

“You can’t just have middle-class people making music. There has to be space for this kind of independent spirit.”

How is it done? Much like the original wave of Mancunian post-punk, the music evokes the network of underground institutions that made it possible: red-light district rehearsal studios complete with rodent audiences, crumbling artist-run ex-mills. No stagey polish here, and Campbell is right to point out what such places allow for those whose backgrounds don’t let them glide seamlessly into public view: “You can’t just have middle class people making music. There has to be space for this kind of independent spirit.”

Nevertheless, Hinterland is suffused with an irrepressible love of the pop hook. In this, it follows neatly from previous projects – even Psychic Life, Campbell’s leftfield collaboration with Public Image Limited bassist Jah Wobble, often pulses with a hyper-modern melodic allure. The new album similarly locates a zigzagging back alley between the parallel paths once imposed on the punk diaspora: ‘difficult’, marginal underground or poptimistic overground.

A projection of corrugated iron and barbed wire frames the live band. It recalls the video to scintillating, über-danceable first single ‘Groove It Out’ in which Campbell lets her guard down, running free amongst weed-entangled inner city dereliction. Tension racks up and dissipates against a synth breakdown that recalls a chorus of robot frogs. Watching it, I think how oddly ephemeral the post-punk revival of the early 2000s was to some: just an excuse to forget about Starsailor. For others it was different. Once discovered, this was the aesthetic of our lives. Powerful reveries are unearthed by the nostalgic cello-driven funk of ‘Hinterland’ and the eerie, momentary splendour of a suburban gloaming captured in sublime closer ‘Mortar Remembers You’.

Yet Campbell has spoken of the physical and mental isolation that fed the album, its title a metaphor for both. This disassociation led to a self-examination exemplified in the raw triptych of ‘I Can See Landscapes’, ‘Silvering’ and ‘Flee’. It gives the new work an emotional depth that is the key distinction between it and the brittle brilliance of debut album Nerve Up.

What’s more, Hinterland does so with admirable economy. At nine songs, the album wastes not a second, and live the band is on and off within an hour – no tedious rockist encore ritual here. No, the ritual is so much more genuine: an incantation that transfigures fragments of memory and pebbledash into an overcast amulet to clutch tightly in dark times.

The image is an upper-body shot of LoneLady aka Julie Campbell. Julie is facing the camera, with her head turned left and looking away. She rests her hands and arms on what appear to be a wooden table or desk in front of her. Behind her is a white wall with chipped and peeling paint paint. Her dark silhouette is reflected on the wall, to her left. Julie wears a long-sleeved black top and sports a glorious short, red hairstyle. Image courtesy of Warp Records.

David Wilkinson is a Stopfordian straggler and the author of a forthcoming book on British post-punk.