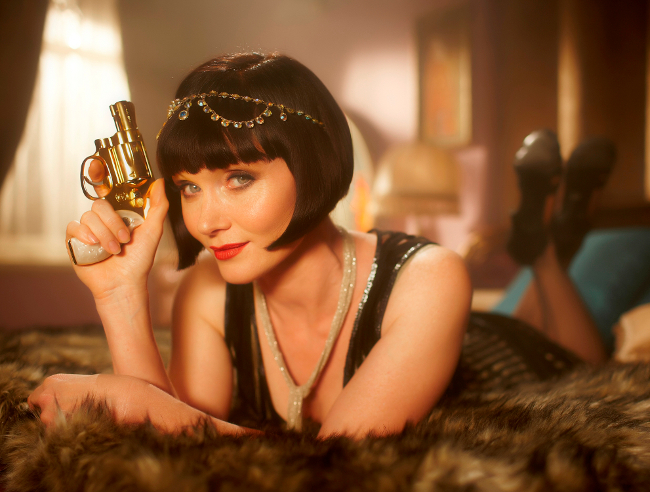 It stars Essie Davis as the Honourable Phryne Fisher, “lady detective”, together with an ensemble cast, including Miriam Margolyes, playing her self-assembled household and some long-suffering members of the Melbourne police force.

With their assistance, Phryne (rhymes with tiny) runs around the city, chasing criminals with a pearl-handled pistol. She is magnificently dressed at all times, even when pursuing murderers across rooftops or inspecting bodies in the morgue.

The resulting show is a delight; the murders themselves are solidly predictable affairs, taken seriously but not overly gritty or dark, while the dialogue is sharp and funny. Plus, there is a certain pleasure in taking in Phryne’s fabulous lifestyle, making it perfectly possible to simply sit back, relax and enjoy the ride.

So why not just leave it there? Miss Fisher’s Murder Mysteries is lovely, easy-to-watch fun and, amid the bright colours and rollicking adventures in its 26 episodes across two seasons, I don’t believe anyone ever uses the word ‘feminist’ or anything close to it. However, I would say this is still the most feminist television show I’ve seen in years, possibly even more so for its light, deceptively simple approach.

First of all, Miss Fisher’s larger-than-life personality is a lot more complicated than it at first seems.

She grew up in poverty — her current wealth and title arose as a result of most of her family being wiped out in the First World War — and, overshadowing that difficult childhood is the fact her sister was abducted by a known kidnapper and murderer who continues to protest his innocence. (This is reminiscent of the backstories of protagonists like Batman and Fox Mulder — the tragic past that is usually bestowed on male characters.)

Despite this, the show resists the temptation of taking Phryne’s subsequent lifelong quest to find out what happened to her sister, along with her wartime experiences as a nurse on the front lines, and using it as the explanation for her worldview…

Miss Fisher leans on her arms on her front on a furry rug on a bed, holding up a golden pistol in her right hand. She wears 1920s get-up: a jewelled head band, red lipstick, thin white scarf, black dress and just visible black high heels (that can be seen from a backwards angle in the background, as her legs are bent at the knees).

This is adapted from the cover for the DVD for series one of Miss Fisher’s Murder Mysteries and can also be seen on the cover of the accompanying CD soundtrack. Shared under fair dealing.