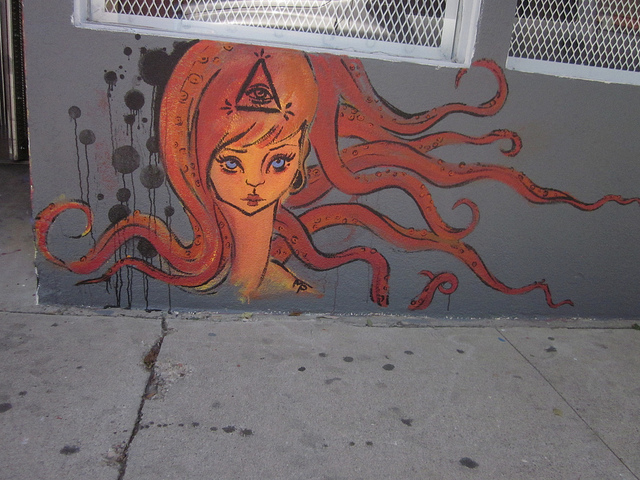 On step-parenting whilst bookish and queer and other such weirdnesses

Sasha Garwood is our March guestblogger.

So, as I mentioned a few posts ago, I have a stepdaughter. She’s a lovely kid, bright and charming and sweet, which is just as well because I haven’t a maternal bone in my body (mutual adult caring is a DIFFERENT bone, okay?) and the fact that I genuinely appreciate her as a person means that our little odd semi-nuclear almost-family mostly ambles along quite happily. I only see her every other weekend, as she mostly lives with her mother on the other side of the country, and whilst she doesn’t exactly see me as a proper adult (I’m ‘like a teenager’ because I’m ‘too much fun’, which I will totally take) we seem to get along pretty well. It’s all good, mostly. The only apparent invertebrate in the overpriced facial unguent is the subsumed (or, sometimes, openly apparent, albeit mainly through the medium of passive aggressive texts to my fiancé) ideological clashes between my worldview and her mother’s.

(I’m going to spend the rest of this blogpost studiously avoiding discussing my partner’s perspective or his relationship with his ex, partly because Inappropriate and partly because there is an outside chance she might one day read this. Suffice it to say that he’s kind, considerate, neurotic and predisposed to self-loathing, self-doubt and assuming his perspectives or decisions are of necessity wrong, and for various reasons of historical awfulness has not necessarily had much say in mutual decision-making about stepdaughter’s ideological upbringing.)

Sometimes, this is fair enough. Or rather: I totally recognise someone’s right to raise their child according to their values and preferences, and therefore am basically willing to follow the rules if I’m told what they are. This doesn’t follow if said rules appear to be actively harmful, as in the recent ‘Stop her from reading!’ argument that had jaws dropping across my geeky and bookish social circles, but things like table manners and media consumption and hiding the news. The latter is pretty alien to me – my parents never edited, let alone curtailed, my reading or news consumption, and whilst I suspect it led to some pretty awkward conversations on their part and occasional upset and mystification on mine, it stood me in pretty good stead for living in the world. I also tended to self-limit – if I really didn’t get something or found it upsetting, I’d leave well alone and/or come back to it later. But still, I (mostly) don’t think it’s appropriate for me to question or undermine stepdaughter’s mother’s authority or the stable-ish boundaries of her life and exposure to the world*.

Even with things like language, I mostly toe the line. Left to myself I swear frequently and fluently, as does her father, but I appreciate that for a 9-year-old at a C of E school perspectives like ‘words have power, use them carefully, including the ones that shock or discomfort people’ and ‘if it’s good enough for the Earl of Rochester, it’s good enough for me’ don’t have much currency, and kids learn by example. I slip up occasionally, but it’s basically okay**.

But. Rules or no rules, there are other aspects of life where my inability to communicate honestly bothers me. The facts of life, for example. As far as her dad knows, we’re not meant to explain to her about sex, which has led to some particularly amusing* visits to farms and the like involving phrases like ‘they’re just playing/cuddling/fighting!’ and some really awkward conversations about how or why I’m not going to have a baby. Stepdaughter hasn’t hit puberty yet, so once again, I think it’s not my place to interfere or undermine, but girls start menstruating pretty early these days, and I’m really hoping some day soon her mother feels it’s time to have a quiet word.

Not unrelatedly: sexuality. I’m not allowed to be out as queer around her, for fear she mentions it to her mum and I’m suddenly deemed persona non grata. (Quite how this would play out given I’m marrying her father, I don’t know, but I think it’d be horrendous for all parties. Needless to say, he hasn’t discussed being bi with his daughter either!) I don’t just mean I can’t tell her I’m queer or initiate conversations on the subject – I wouldn’t do that anyway. I mean I refrain from answering her questions honestly sometimes, from any mention of dating anyone who isn’t male, the same way her father refrains from mentioning that he was briefly married very young before he met stepdaughter’s mother. (‘It’s just not worth the hassle,’ I quote.) Stepdaughter’s a direct and curious child, she asks lots of questions, and I find it runs very much against the grain not to respond with similar directness.

I don’t have any answers. I’m not even sure what the questions are. I do know that as stepdaughter grows up, and starts dealing with things like bodily changes and sexuality and all the cultural bullshit around adult femininity, I am going to be increasingly less inclined to accede to what feels to me like dishonesty. Not that I would ever force a topic or viewpoint on her. This isn’t about my wanting to evangelise, even about things like consent culture I evangelise about pretty fiercely with adults. It’s about me finding it really difficult to navigate between wanting to respect stepdaughter’s mother’s right to raise her child how she wants, my partner’s right to have some significant emotional input into decisions made about his daughter’s emotional and psychological wellbeing, and my desire to provide stepdaughter with support in the best way I know how – by being honest about the difficult things.

*Obviously enough, a lot of this has its roots in family norms. My family are expressive, argumentative, open, prone to discussing Big Things and not shying away from conflict. This does not equate to seeking it, by the way – I really don’t like arguing with people, particularly in emotionally loaded situations, and my boyfriend and I deal with pretty much everything by discussion and explanation and requests to stop if one of us is getting upset, and that works as well as these things can. But I also know how to deal with conflict, and am accustomed to expressing myself under emotional pressure. Boyfriend’s family have been very nice and very welcoming to me, but certainly don’t discuss or communicate in the same way mine do, which is occasionally odd, as I ask questions as a matter of course without realising that it’s actually quite a Big Deal to talk about things. Stepdaughter’s mother’s family – who seem very nice and friendly whenever I’ve encountered them – apparently adhere to strict and occasionally arcane rules, which is probably, and legitimately, where all this comes from.

** My perspective on swearing is another blogpost in itself – it’s context-dependent, but I am generally all in favour of using words that are direct, expressive, multivalent and capable of making people pay attention. Often these are swearwords. I also think Stephen Fry – occasionally problematic as he is – has some pretty good points here. Worth mentioning that unlike the reading thing, my parents got very upset about ‘bad language’ when I was a child – we each take of our parents’ lessons what we like and transform the rest, I suppose, which will make revisiting these subjects with stepdaughter as an adult very interesting.

The image above is of orange graffiti on a grey wall. The image is of a woman with octopus tentacles for hair and a triangle to represent her third eye. She is smiling pleasantly. Thanks Mara Patrick for the photo.