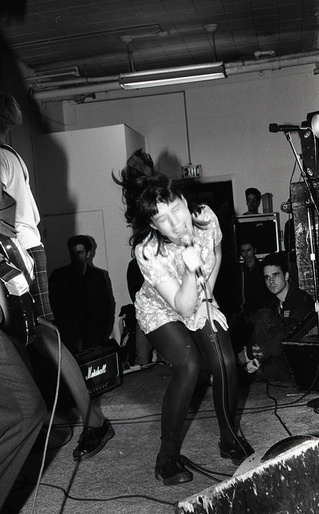 With mere hours to spare, please click here for your March playlist. You can also view the track-list here.

Following on from last months’ inspired LGBT playlist (which you need to check out, BTW), I’ve been looking forward to featuring a playlist lifted entirely from a megamix CD a friend of mine made for me. However, a number of key tracks in the collection are not available on Spotify, which completely screws up the running and compilation as a whole. I’ll attempt to make this up to you by embedding some YouTube business which has reached the places Spotify has failed to go.

Some context: my friend M made this for me sometime around late 2006/early 2007, a seminal period in my life. It introduced me to some awesome new tunes, artists and developed my knowledge and love of all things riot grrrl and queercore. M insisted that he significantly preferred female artists to male and then presented me with this glorious megamix. I was impressed, to say the least, which I think was the desired effect upon playing the CD. I later discovered, upon hearing it playing at a party a few years later, that this lovingly composed CD had also been copied and distributed to at least one other woman, leaving me feeling somewhat cheated. Not long after receiving the megamix, I bought myself a cheap (but quality) drum kit and proceeded to infuriate my neighbours by practicing many of the drum beats featured on the CD, so it brings back happy memories for me (but not, I fear, for my neighbours).

To the tracks! The Team Dresch tune is clearly brilliant. My megamix CD also included ‘Uncle Phranc’, which I featured on last month’s playlist, so check that out if you like this tune. Like many of you, I’ve heard Bikini Kill’s ‘Rebel Girl’ countless times, but for those of you who haven’t, you’re in for a treat. Track one of the aforementioned tracks Spotify failed to deliver on was Queen Adreena’s ‘Pretty Like Drugs’:

Recognise that distinctive voice? It’s the glorious pipes of KatieJane Garside, who used to sing lead vocals with Daisy Chainsaw. I personally don’t like watching accompanying visuals when listening to new tunes, as I find it can completely alter my perception of a track (usually for the worse – there are some pretty painful music videos out there), but if you’d like to see the original, you can click here.

M’s tracklist has Melt Banana’s ‘Tapir’s Flown Away’ listed but, when I listen to this on Spotify, it’s not the right track. The track on my megamix CD sounds more like ‘Cannot’, which I’ve included on the playlist. Just to confuse matters further, I’ve also found a YouTube video for the track featured on my megamix, which sounds slightly more like my version – compare and contrast:

Either way, both tracks are absolutely banging.

M included two Sleater-Kinney tracks, which I’m not averse to, particularly in light of their recent return to music. Click here for Lusana’s review of their recent London gig. Elastica’s ‘Blue’ is an oldie, but a massive goodie. Their entire debut album is pretty near perfect and definitely worth seeking out if you’re not familiar with it.

I love the Bangs track for its 1990s nostalgia. Bangs were a trio, including Maggie Vail, sister of the hallowed Tobi Vail, who coined the spelling of ‘grrrl’ and played drums with Bikini Kill. Interestingly, Bangs did not define themselves as a riot grrrl band, preferring the term “rock band”.

The image is a black and white shot of a vintage Kathleen Hanna performing with the band Bikini Kill in 1991. Kathleen is leaning down and shouting into the microphone, her eyes shut and hair flying. She looks awesome. The picture is by Brad Sigal and is shared under a Creative Commons licence. I’m assuming that Brad was about on the scene at the time these images were taken, as he has a bunch of incredible pictures of bands such as Fugazi and Nation of Ulysses from the late 1980s and early ’90s, in addition to images from various social and political demonstrations. High five to that man.