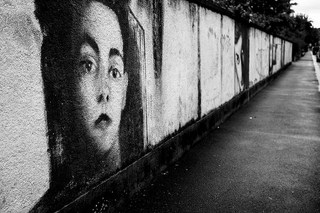 Pretty on the inside, or, in which language is a bastard

Sasha Garwood discusses the problem with the word pretty.

A close friend of mine hates being called pretty. (So I try not to, and apologise when it slips out because I’m not thinking – this isn’t going to be a post about how my gender-political convictions trump somebody else’s right to boundaries.) He (genderqueer, uses male pronouns for convenience) cites this brilliant Katie Makkai poem as explanation, which is absolutely fair enough. But it interests and on some level troubles me, because I suspect I experience both that poem and ‘pretty’ as a word as profoundly gendered.

On some level, ‘pretty’ is culturally feminised. The OED is paywalled, but it appears it’s not just me: oxfordictionaries.com defines ‘pretty’ as ‘(of a person, especially a woman or child) attractive in a delicate way without being truly beautiful’; merriamwebster.com as ‘pleasing by delicacy or grace, having conventionally accepted elements of beauty’. Both have secondary, objectifying meanings too: ‘an attractive thing, especially a trinket’; ‘appearing or sounding pleasant or nice but lacking strength, force, manliness, purpose, or intensity.’ That last definition – ‘lacking strength, force, manliness, purpose’ – cuts to the heart of much of this. ‘Pretty’ is weakened and trivialised – and yet it is also the cultural standard to which women are socialised to aspire. Or more insidious yet, expected to provide as a matter of course: burlesque performer Emily Armstrong’s Pretty is a Set of Skills and Erin McKean’s You Don’t Have to be Pretty both discuss (and resist) this from differently incisive and defiant angles. But the fact remains that for women specifically, ‘pretty’ and our erasure through inhabiting it or our dismissal through failing to achieve it dogs our steps through culture.

There’s a distressing normality to the spectrum of benevolent sexists shading to misogynists who seriously use phrases like ‘you’re too pretty to look so sad’ or ‘you’d be so pretty if you smiled’. We’re encouraged to be ‘pretty’ as opposed to having feelings or personalities or thoughts. ‘Pretty’ feels very much like a thing I’ve been failing at all my life, often through possession of the same, despite being on the, uh, face of it not a million miles away from its culturally dictated norms- small, slim, long hair, delicate features. Meeting a friend’s new baby (very cute, assigned female at birth) recently, I cooed ‘you so pretty’, and quickly followed it up with ‘and you clever and going to take over the world,’ because somehow it felt much more damaging to me to induct a female baby into ‘pretty’ as a term of praise. Had said baby been assigned male, I probably wouldn’t have worried so much – on some level I guess it feels (legitimately or otherwise) that calling a male baby ‘pretty’ is somehow an act of resistance.

This is complicated somewhat by the fact that my personal aesthetic preferences run to the androgynous and soulful, and so ‘pretty’ is often a fairly accurate description of those of all genders I find attractive. I’m frequently tempted to use it as a compliment, and that’s fine with people who are either indifferent or share my pleasure in going against the cultural grain. My boyfriend is certainly ‘pretty’ – big eyes, small mouth, cheekbones – and fortunately he’s down with being labelled thus. (‘I disagree, but I don’t mind’, he pointed out as I cleared this with him, ‘If I did, you would’ve heard about it before now. About 100 times a week.’)

When I describe someone or something as pretty – particularly when it’s not someone young and female, which is mostly the case – it feels in some way like a fuck you, a reclamation and repurposing of a word that has dogged me and my gender my whole life. Both because of and despite that, I use it a lot – it’s my go-to term of aesthetic approval in everyday conversation, less intense and soulful than ‘beautiful’, less determinedly sexual than ‘hot’, less problematically masculinised than ‘handsome’. It feels like some small attempt to redress the balance, to reinvent ‘pretty’ as a universally applicable term of approbation, to bring feminisation into aspiration instead of disparagement. I like its slightly offhand, flippant tone, which completely fails to disguise how heartfelt it really is. I’d be the first to point out that none of this constitutes the right to use it of anyone made uncomfortable by it – but I would also rather live in a world where feminisation and aestheticism wasn’t used to reduce or control or belittle, and reclaiming ‘pretty’ is my (inadequate and imperfect) attempt to build that world.

The image above shows a white wall with a spray-painted picture of a woman. Thanks Transformer18 for the photo.