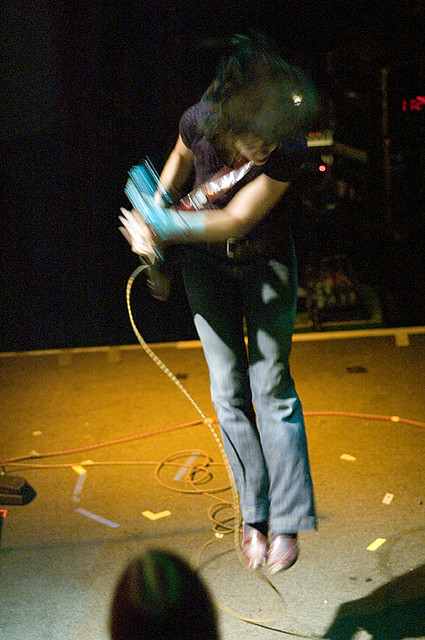 My 16-year-old self would be very jealous of me tonight. Not only am I spending the evening in The Roundhouse, a venue just up the road from Camden Market (the height of cool to an earnest, band T-shirt wearing teenage goth with a penchant for incense sticks), but I’m also here to see a band that defined my understanding of the term ‘girl crush’. Sleater-Kinney is the amalgamation of two original Riot Grrrl acts (Corin Tucker of Heavens to Betsy and Carrie Brownstein of Excuse 17) and one of the cornerstones of my feminist awakening. The only thing that differs between my 16 and 26-year-old selves as I wait for the venue to open, is that the 26-year-old is extremely relieved to have seated tickets as, these days, standing up for three hours produces the kind of aches and pains the 16-year-old would never have had to contend with.

Despite my excitement, I have some reservations. Will I be disappointed? Will the rawness and energy of the band’s original sound still be there? Will Carrie Brownstein’s recent mainstream success with the Portlandia series mean a shift towards a more ‘crowd pleasing’ aesthetic with less of a focus on the progressive sexual politics and feminism that characterised Sleater-Kinney’s earlier work? Will the gig ultimately do nothing except confirm my creeping suspicion that the spirit of ’90s Riot Grrrl is a dying light in today’s music scene? I had listened to Sleater-Kinney’s new album No Cities to Love before I arrived and I still wasn’t sure how I felt about it. As a bit of a ‘first album purist’, I’ve always maintained that I like the old stuff better. In a way, I am completely relying on the gig to bring the more recent songs to life – the dwindling part of me that is still hopeful about new music wants and needs it to be good.

The support act, Pins, definitely play a part in helping dispel my doubts. Here is a relatively new band from Manchester (founded in 2011) who have the kind of stage presence that I associate with a much earlier music scene. Although their coolness and shoegazey guitar sound put them in a similar category to My Bloody Valentine and Lush, there is enough limb flailing and punk energy to justify comparisons with early Hole and Sleater-Kinney themselves. By the time it gets to their Misfits cover, I’m enjoying myself, as well as steadily forgetting about my initial concerns.

This is a rebirth rather than a revival

“A triumphant return” is standard journalese for a comeback gig review but, when it comes to Sleater-Kinney’s performance, I can’t help but see it as accurate. For the band’s fanbase, it is also an unlikely (although extremely welcome) return after their 2006 hiatus announcement, which no doubt had many people questioning whether the band would ever tour again, let alone release another record. The nine years that have passed since have seen the individual members concentrating on various personal endeavours, including musical side projects (The Corin Tucker Band and Wild Flag) as well as, most notably, Carrie Brownstein’s successful television debut alongside Fred Armisen in Portlandia, a series which pokes fun at the hipster contingent residing in the city of Portland, Oregon.

Regardless of the other projects that have been taking their attention, Sleater-Kinney’s energy when they take to the stage does not seem half-hearted. There is no sense that this is the kind of tired ‘comeback’ gig that seems to be all the rage at the moment, with everybody from sub-par ’90s boybands, to singers your parents liked in the seventies taking part.

This is a rebirth rather than a revival. Corin Tucker’s voice goes from strength to strength, its distinctive soulful quality infused with the remnants of the characteristic Riot Grrrl drawl. Meanwhile, Carrie Brownstein expertly demonstrates why she is so deserving of her place in Spin’s 100 Top Guitarists, while the band’s drummer, Janet Weiss, succeeds in showing what it means to create “a beat so solid you could bang your head against it”.

The freshness of the sound this evening makes it hard to believe that Sleater-Kinney are a band with eight studio albums behind them, but there is a tightness to the set which simultaneously shows them to be out-and-out professionals – they hardly miss a beat. The staunchest first album purist might be disappointed but, on the whole, there is a pleasing mix of old and new tracks – perfect for fans who discovered the band through the gloriously creepy ‘Bury Our Friends‘ music video (featuring an unrecognisable Miranda July) and for those who cut their teeth on Dig Me Out and The Woods. Personal favourites of mine include ‘Get Up’ from 1999 album The Hot Rock, as well as Carrie’s awesome performance of ‘Modern Girl‘ in the encore.

“Since we’ve started as a band… things have changed. But they’ve not changed enough”

But were my reservations unfounded? The gig certainly makes me appreciate the new songs (No Cities to Love will be my iPod album of choice for all train and bus journeys for the foreseeable future) but are Sleater-Kinney still the band I idolised in my teenage years? Do they still have the social conscience and integrity that set them apart from some of the other all-female acts who gained popularity in the mid-’90s?

The answer to these questions comes towards the end of the evening, just before an impassioned performance of ‘Gimme Love’. Prior to beginning the song, Tucker takes to the mic: “Since we’ve started as a band… things have changed. But they’ve not changed enough.” A simple line but, for me, it’s the moment when I realise that Sleater-Kinney are still, at their core, the same band they were when they started out. The sound may be cleaner, the lyrics more polished and the music videos more weird and wonderful, but at the heart, there is still an awareness of the work to be done in the music world (and beyond) in regards to gender equality. It was this that made me fall in love with Sleater-Kinney’s sound and the scene they are a part of, and it is this that will make me stay in love. So, to address the question about whether Riot Grrrl is dead, I can happily paraphrase Portlandia and say no – the dream of Riot Grrrl is still alive and, without a doubt, in The Roundhouse this evening.

The image shows Carrie Brownstein from Sleater-Kinney onstage, jumping in the air, guitar in hands, and rocking out. She wears blue jeans, pink trainers and her face is looking down towards the floor. Trying to find more recent images of Sleater-Kinney that we can use has proved a challenge, which is why this image is from 2005. A goodie nonetheless, I’d say. Picture by Damon Green, shared under a Creative Commons licence.

Lusana is a fiction editor and ex-bookseller. Her free time is mainly spent absorbed in such productive pursuits as taking (too many) photos of her cat and looking back fondly on the 1990s.