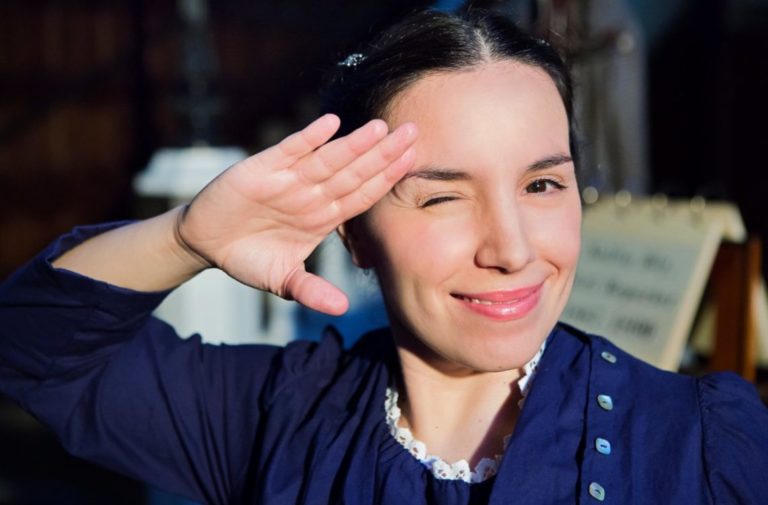 A vault of potential

This review contains some very small spoilers of the reviewed shows.

This year, VAULT Festival packed a lot into an eye-boggling 23-page programme that required the enthusiast to be as sharp-eared and strategic as the Edinburgh Festival. Buried under the Waterloo railway tracks and hugging the underground lines, the vaults that give the festival its name are arches of Victorian brick, dripping stalactites of lime and city soot.

For six weeks, vitality, creativity and invention fill each cavernous space. There is a pub, gallery and café, along with an extraordinary range of fringe theatre and comedy, some fresh and some trailing plaudits from the Edinburgh Festival. With the chance to see three shows a night, there is plenty to choose from; the festival has an impressive line-up of one-woman shows and is a great showcase for new talent. Indeed, I find myself listening out alertly in the bar to discover what other people have found amazing (or less amazing).

There are two shows with very different ambitions at the opening night of the festival. First of all, there is Helen Duff’s Vanity Bites Back, a comic monologue based on personal revelation: the performer’s battle with anorexia.

Jill, performed by Helen Duff, is taking part in a pilot for a new cookery show, set chaotically with 1950s primary colours. Jill is out to topple Mary Berry and Nigella Lawson and is putting together her star turn: a cheesecake.

Duff’s performance is compelling, witty, inventive and reaches towards a redemptive, if haunted, conclusion

Woe betide those who eat the biscuit handed out with much bonhomie in the first few moments. Do not sit in the front two rows of Helen Duff’s show unless you are up for audience participation.

Weirdly, and perhaps intentionally, Jill’s accent wanders globally throughout the show. She claims deep knowledge of Berwick-upon-Tweed but is impossible to place, speaking at times with the honeyed tones of Margaret Thatcher at her most poisonous and at others with the South African lilt of Pieter Dirk Uys’s Evita Bezuidenhout.

At first, it seems that the understandably nervous Jill has an unusually disrespectful attitude to her ingredients. As she beats the biscuits to blazes with a frying pan, we have our first indication that all is not well with our host’s relationship with food. It is something of a relief when the mood changes in the downtime of an ‘advertising break’. This highly-strung performer, with an articulate and expressive charm and sharply intelligent wit, draws us into an intimate relationship promising a story and revelations.

But then the lights come up again and her cheesecake preparations resume with an attempt to melt her butter by the power of collective meditation. This successful process continues as the melted butter is further softened by her rubbing into her body. Food and the body become inextricably engaged.

Again, everything halts for another ad break, but the story of a traumatic bicycle accident in east London, with the revelation of a long-term struggle with anorexia, darken the mood.

This is a compelling show that digs deep. Helen Duff’s performance has an anarchic comic edge and high anxiety that fires the comedy and has its audience on tenterhooks. Both Helen Duff and director Holly Stoppit, a trained dramatherapist and clown teacher, have taken off the gloves in dealing with this issue. They carry their audience, tossed between laughter and discomfort, towards a better understanding of the long-term effects of anorexia.

Duff’s performance is compelling, witty, inventive and reaches towards a redemptive, if haunted, conclusion (and a totally inedible cheesecake).

Levy’s performance hints at moments when the character could have taken fire, but her show remains a dramatized lecture

My second choice of the evening is Maya Levy and Abigail Anderson’s The Adventures of Nellie Bly, a biographical portrait of a woman from the United States who blazed a trail for women journalists.

Nellie Bly specialised in immersive investigative journalism. Her most famous pieces included allowing herself to be incarcerated in an asylum, setting out to break the record, set by Jules Verne‘s Phileas Fogg, of travelling around the world in 80 days (she achieved 72) and covering World War I from Austria.

Still, biographies are difficult to turn into theatre. The interesting years of someone’s life are often those in which they are forging the identity for which they become known, but then what follows becomes repetitive, even when the life plays out all that we have come to recognise as the traps set for women pioneers in any profession. 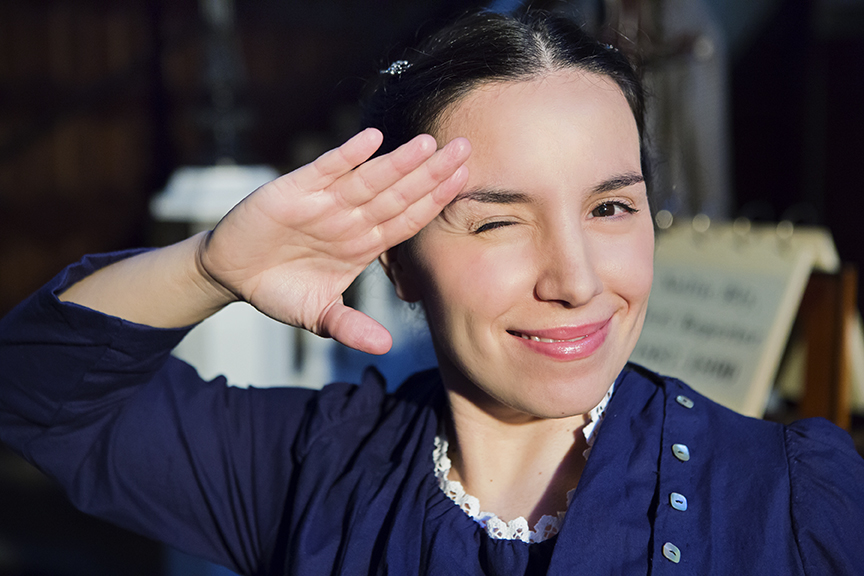 The danger with most biographical tales of sterling women is that their authors become so preoccupied with the sense that “this story must be heard” that they fail to take the story to the next level of being a drama.

Educated Victorian and Edwardian women are particularly difficult subjects. Many wrote autobiographies to inspire others to follow in their footsteps. These can, however, be their monuments of stone. Written in the decorous language of the day, designed to uplift, inspire and defend, the works often lack intimacy, offering only a respectable carapace, hard to crack.

Writers need to burrow into the places these subjects didn’t want us to see. They need to invent more, imagine encounters and make the conflict of these women’s personal lives as present as the publicly well-recorded events.

Of course, this carries risk. The more thoughtful reviews of The Imitation Game, a life of Alan Turing, suggest the line has been crossed to the point where some who knew Turing are unable to recognise his story in the film. But the dramatic characters we know, love and remember are those with whom we establish a kind of warts-and-all intimacy.

The Adventures of Nellie Bly is an admirable, articulate, precise and often entertaining history lesson. The comic songs are fun and beautifully sung; the bicycle song, in particular, is engaged with the life of the character. Levy’s performance hints at moments when the character could have taken fire, but her show remains a dramatized lecture. The authors have not quite gone the distance to bring this character to full life. They need to make more fun of their heroine.

The show, in the end, has fun and pathos, but lacks anger 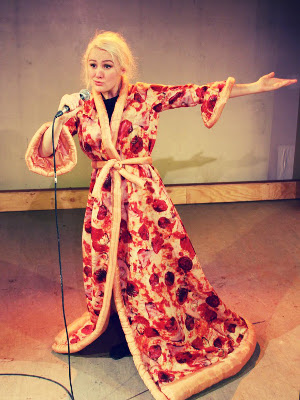 Blake and her collaborator Scott Quinn then wrote comic songs around these stories. In performance, Blake tells the stories in myriad costumes and sings. Some of the tales are sad: a young man is unable to tell his bride-to-be he has been made redundant and does not tell her until the bailiffs arrive on their doorstep. Some are entertaining, such as the Irish barmaid codding Americans with tales of leprechaun ancestry. Some are sad and nasty; in particular, those examining teenage invention on Facebook and other websites.

This edgy comedy is often very funny and, like the best stand-up, it offers some moments of high anxiety.

Yve Blake is a comic actor, unlike the suffererer, Helen Duff, or the devotee, Maya Levy. Blake is talented, her songs are witty and well sung and her theme is lively, but I feel there should have been more thought about the how and the why of lying. And is Blake right to stick so steadfastly to those stories shared on her website? She was hardly going to find the confessions of a cabinet minister there or accounts from anybody whose lies would matter more than to make a mess of a private life. In the end, the show has fun and pathos, but lacks anger.

Helen Duff’s performance packs a fierce rage against the waste of a woman to anorexia, while Maya Levy’s is missing that anarchic edge but tells a serious story. If Yve Blake and Scott Quinn ever turn the full light of their wit and invention onto some serious porkies, their show will burn.

Photo 1: From Vanity Bites Back, the photo shows a person who appears to be a young woman talking animatedly to the audience, her fists clenched as she makes a point. She wears an apron with a busy, possibly floral, pattern. Out of focus in the background is a table covered with a pink and white striped tablecloth, with a red mixing bowl and an open packet of biscuits on it.

Photo 2 and the feature photo: From The Adventures of Nellie Bly, the photo shows a person who appears to be a young woman looking straight at the camera as she smiles, winks and salutes. The clothes she is wearing appear to be from a previous century.

Photo 3: By Katie Lambert. From The Lie Collector, the photo shows a person who appears to be a young woman mid-speech, holding a microphone that she is talking into as she gesticulates. She wears a long robe that looks like it is covered in a print of pepperoni pizza.

Pamela Edwardes is a scriptwriter and freelance editor