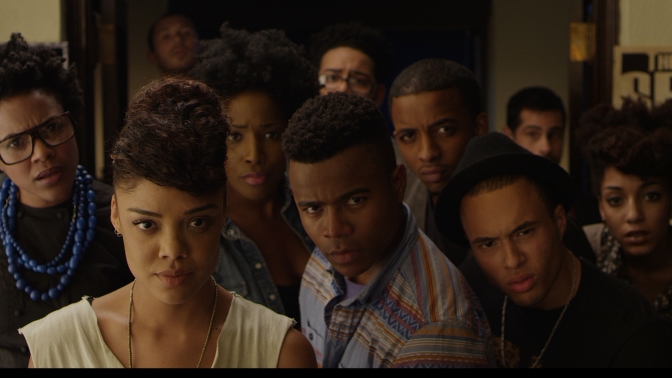 If we’re lucky, it happens about once a year. There’ll be rumblings at Sundance, or Cannes, or SXSW, that there’s something new coming, something that’s going to be The Next Big Thing, something that’s finally going to change representations of black people in cinema. Justin Simien’s Dear White People was supposed to be this year’s thing (if you’re American, it was last year’s thing, as was Selma, and you’re probably awaiting this year’s thing, whatever that may be…). Finally a film that would take the genre of college movie away from middle class white frat dudes and actually show, as its tagline promised, the struggle of being “a black face in a white place”. Does the film do that? Well, it does and it doesn’t.

Sure, Dear White People is funny. At least the surprisingly mixed for the London BFI audience that I saw it with thought it was. It pokes fun at virtually everyone – at white guys who spout lines like “the hardest thing to be in the current workforce is a white American male”; at black people who take themselves too seriously; black people who don’t take themselves seriously enough; even at Asian students who attend Black Student Union meetings because the snacks are better than those at the Asian American Student Union. The jokes are clever too, mocking the stereotypical black culture that we’re used to seeing in Tyler Perry films and lazy white depictions of black people.

Why do black male directors seem to struggle so much with creating dynamic non-clichéd female characters?

That is also one of the film’s weaknesses. It thinks that it’s cleverer than it is and tries to make dynamic new characters while actually falling back on several clichés that wouldn’t look out of place in the very worst Spike Lee film (take your pick, but this gal’s choice terrible Spike film is undeniably School Daze, a film that Dear White People is very clearly influenced by).

We’re guided through the fictional Winchester University by four black students: Troy (Brandon P Bell), head of the college’s black house and son of the Dean, who is (of course!) an overachiever who’s dating a white girl; Lionel (Tyler James Williams), a gay guy who fails to find a place in black or white society; Sam (Tessa Thompson), mixed race and overcompensating with a Dear White People, a radio show that spouts “blacker than thou propaganda by a bougie Lisa Bonet wannabe”; and Coco, nee Colandrea which she deems too “ghetto” (Teyonah Parris), who has her sights set on reality TV stardom whilst not-so-secretly hating her dark skin. The four converge when the school’s satirical paper, Pastiche, throws a “black party” in order to maintain their “freedom of speech”. 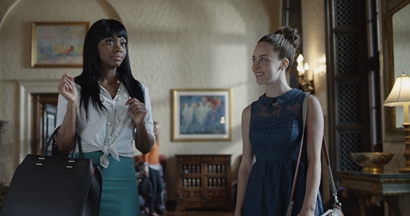 The film’s biggest problem is its female characters. Why do black male directors seem to struggle so much with creating dynamic non-clichéd female protagonists? It’s like the curse of Spike Lee, who seems to rely almost constantly on his three favourite clichés (the “virgin”, the “whore” and the “mother”) throughout his career, has infected too many wannabe black male directors, from the misogynistic caricatures seen in the films of Lee Daniels and Tyler Perry to up-and-comers such as Ryan Coogler who gives us “the nagging girlfriend” and “caring mother” in his otherwise heartbreaking and important Fruitvale Station. I feel now is a good time to point out that despite what may seem to be the contrary, I am a huge Spike Lee fan. As long as I ignore his female characters, that is…

As long as a film is making some kind of stab at changing representations of black people in cinema, it must be celebrated, lauded as The Next Big Thing

Of course, the two main female characters in the film hate each other. And of course, they’re both filled with self-loathing. Coco hates Sam because she feels like Sam is allowed freer movement in the black community due to her mixed heritage, and for the fact that Sam’s radio station and YouTube channel gets more hits than hers. Sam hates Coco because she has more of a ‘claim’ to being black. While it’s something that many black women, this writer included, will face throughout their lifetime, it’s painful to watch it being played out once again in a film.

Sam escapes better, seeming to come to terms with her mixed heritage, yet it’s disappointing to see that her accepting means taking on a more subdued, less provocative nature. She’s tired of being the “angry black chick”, she proclaims at the end of the film, though it’s reassuring to see that she still fights the status quo by treating her white boyfriend less as a secret shame, and more as… well… an actual boyfriend. But it’s Coco who comes out of it the worst. Despite clearly being disgusted by the black party, she aggressively tells Sam that she sees nothing wrong with it, and then just sort of fades out of the film. It’s distressing to see a young black woman filled with so much self-hate, particularly as the film’s male characters seem to overcome their inhibitions and find their place within the college’s black house, and, most likely, wider black society. 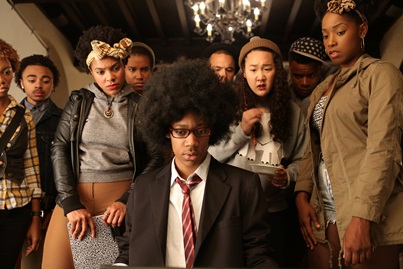 Unfortunately, that’s how it goes. As long as a film is making some kind of stab at changing representations of black people in cinema, it must be celebrated, lauded as The Next Big Thing. We wait breathlessly for this golden shining film to come along and then feel ashamed if it doesn’t quite live up to our expectations. Does Dear White People change representations of black people in cinema? Well, that depends on how much attention you pay to its representations of women. It’s a step in the right direction – and, thankfully, a step further away from the insidious misogyny of School Daze – but it’s clear that we’re still not quite there yet.

Dear White People was shown at 2014 London Film Festival and at BFI Flare in March 2015. Signature Entertainment has recently bought UK distribution rights to the film.

All pictures courtesy of BFI.

First picture is a group photo of actors from the film, looking straight into the camera, as if they were asking: “Seriously?” of the viewer.

Third picture is of a group of students with Lionel (Tyler James Williams) kneeling in the front, all facing the camera, as if looking at something in front of Lionel which we cannot see.

Grace Barber-Plentie is a film student whose main passions in life are arguing with people about Kanye West and potatoes. She blogs (infrequently) at Real to Reel Reviews, co-runs Reel Good Film Club and is terrible at puns