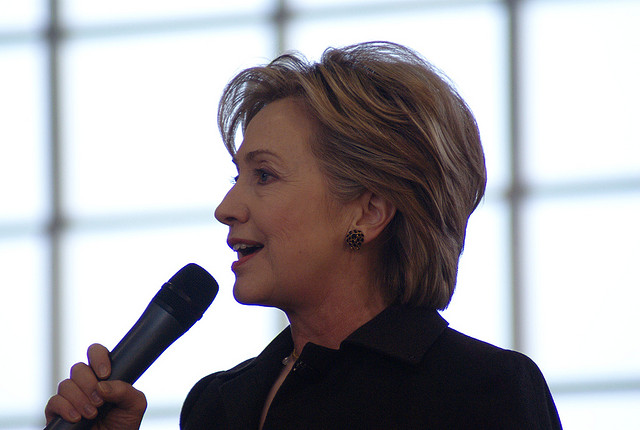 Twenty years ago in Beijing, in what was to be considered a watershed speech, Hillary Clinton called for women’s rights to be central to human rights and to be implemented accordingly. This impressive speech forms the basis for the creation of the hour-long documentary, Hillary Clinton: The Power of Women, which touches on a range of women’s struggles and progress across the globe since 1995. As I switch over to view the programme, I try to ignore the title and put my prejudices and biases aside. After all, here is a whole hour’s worth of prime-time television dedicated solely to the progress and developments of women’s movements; something that is less uncommon in recent years but, still, a rarity indeed.

Hillary Clinton’s Beijing statement was aimed at a global audience, encompassing countries throughout the world. The Power of Women uses interviews with prominent female activists to demonstrate the parallels and diverse ways that women have gained political power around the world over the last two decades. Nobel Peace prize winner Leymah Gbowee, journalist Mona Eltahawy and Afghan Member of Parliament Fawzia Koofi all feature and their anti-corruption, anti-war and feminist sentiments are inspiring; particularly powerful is the footage of Liberian women from Women of Liberia Mass Action for Peace undertaking a sit-in at the presidential palace, demanding leaders take steps to end the civil war. These women mobilised and were central to bringing peace to Liberia, as well as being crucial to the election of Liberia’s (and indeed, Africa’s) first woman president, Ellen Johnson Sirleaf.

If Clinton is to be celebrated for her contribution to women’s struggle in global politics, surely a much more critical analysis of her foreign policies is necessary

Meanwhile, the stories of Madeleine Albright, Condoleezza Rice and Hillary Clinton rising to the top within the American political system could not contrast more with the stories of women who have lived through the Liberian civil war, various Egyptian dictatorships and the Taliban’s regime. Indeed, as the documentary goes on, I feel increasingly disappointed that the obvious tensions and contradictions interspersing these women’s stories and voices are not investigated by either the producers or editors. At one point, Eltahawy explains the intersectional nature of the 25 January Revolution, where it is shown that the participation of Egyptian women was central to the protests in Tahrir Square. As Eltahawy talks about the plight Egyptian women suffered for decades under a repressive regime, there is a brief moment where she expresses betrayal regarding Clinton’s double-standard in relation to the embarrassing reality of the US’s support for Mubarak, along with the friendship between the Clinton and Mubarak families. Yet this is explained away briefly and unsatisfactorily by Clinton who, rather patronisingly, says that the Egyptians were not “ready for politics”. Perhaps her paternalistic explanation also legitimises the US State department’s extensive enabling of the current Egyptian military regime.

The most striking aspect of The Power of Women is the absence of any explicit mention of Clinton’s support for – and instigation of – numerous foreign policies during her time as Secretary of State that have brought suffering to women around the globe. If Clinton is to be celebrated for her contribution to women’s struggle in global politics, surely a much more critical analysis of her foreign policies is necessary?

How would Hillary Clinton address and justify her government’s arms dealings to these women who have lost entire families, homes and livelihoods?

Clinton is renowned for her militarism and hawkishness: she backed intervention in Libya, sold arms to Syrian rebels, supported the massive surge of 30,000 troops to Afghanistan and has been a part of a State Department that has become infamous for extensive drone strikes in Pakistan, Yemen and Somalia. It is worth noting that she staunchly defended the massacres inflicted upon Gaza by Israel, essentially validating the murdering of hundreds of families. One must ask, how would Hillary Clinton address and justify her government’s arms dealings to these women who have lost entire families, homes and livelihoods? How would she explain her feminist visions to them?

Other female Secretaries of State also have much to answer for when it comes to their track record on aggressive foreign policies. For example, Condoleezza Rice was key in waging a catastrophic war in Iraq, resulting in a refugee crisis throughout the Middle East and, in particular, immense hardship for Iraqi refugee women. Indeed, the last few minutes of The Power of Women wraps up with Hillary Clinton referring to the threats that groups like ISIS pose to women. It is a bit ironic then, that the epitome of misogyny and hatred that is ISIS rose out of burning flames of lawlessness during the years of an illegal military occupation and war that Clinton voted for. At best, what feels like an obfuscation of joining the dots may simply be an oversight. However, at worst, it could actually be lulling us into a false sense of progress, where women are considered to be politically valuable simply because of the opportunity for feminist rhetoric, rather than any notions of transnational solidarity and support for women everywhere.

This is all the more important, considering Clinton’s imminent presidential race. As we have learnt in the UK, with Margaret Thatcher, having female leadership means little if that leader’s policies work to marginalise women on a national and international level; what is needed is a (possibly feminist) foreign policy rather than imperialist invasions legitimised under the paternalistic banner of saving women abroad.

Mona Eltahawy’s words at the end of the documentary resonate strongly. I only wish they had been used as the starting point of the programme:

…For the women who have access to power: use it! In support of women’s rights, because sadly not all of them do.

Judging by Rice’s support for the use of torture on detainees and Clinton’s backing of bombing campaigns, it would appear that these women aren’t supporting human rights, full stop.

The Power of Women is available to watch on BBC iPlayer and the BBC2 site until 24 April 2015.

Left-side profile shot of Hillary Clinton, mid-speech, at the microphone in Nashua, NA, US. She wears black and stands in front of a blurred white background with black lines (possibly a window and windowpane). By Marc Nozell, shared under a Creative Commons Licence.

Amelia currently works in Birmingham and believes in strong coffee, long walks and sisterhood. She loves intersectionality, doesn’t like capitalism and wishes television would provide the public with more intricate and realistic depictions of women. Amelia is particularly interested in gender in the Middle East and unravelling concepts of masculinity