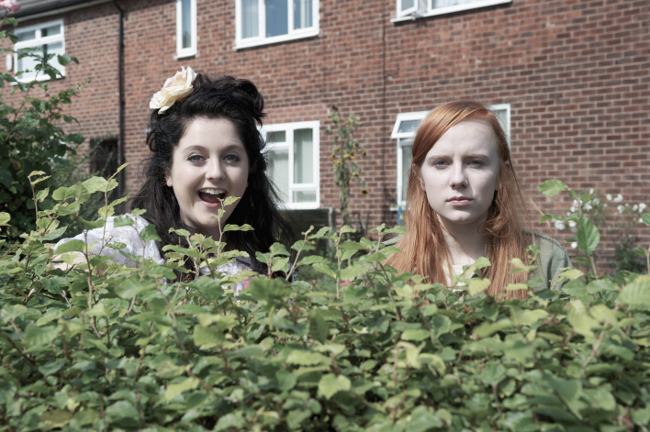 The leader of the pack?

Warning: contains mild spoilers for episodes one to four.

As well as being a critic, bestselling author and award-winning columnist, Caitlin Moran is a divider of opinions. A quick look on Amazon reveals that while some reviews describe How to Be a Woman, her chatty manifesto for contemporary feminism, as “brilliant, funny and a must read for all womankind“, others label it “flabby, self-absorbed bluster“.

And you probably know that in 2012, in a now notorious tweet, Moran declared that she “literally couldn’t give a shit” about the absence of women of colour in Girls, Lena Dunham’s Brooklyn-based comedy drama. This sparked off the controversy that was Girlsgate and launched a thousand blog posts (or several, judging by a quick Google). Her comment, along with the explanation which followed it, led some to conclude that Moran’s particular brand of feminism might be more than a little shonky in the intersectionality department. The reaction of those who defended her (“calm down dear”, “why can’t we all just get along and focus on kicking the patriarchy’s ass?” and “intersectionality? That’s a mighty big word”) didn’t really dissuade them.

Feminist disagreements aside, Ms Moran has now added sitcom writer to her list of accomplishments. Raised by Wolves is a semi-autobiographical coming-of-age comedy which has been updated from her childhood in 1980s Wolverhampton to the present day. She wrote it with her sister Caroline, and has said they created it because, “Telly never has any smart, amusing intellectuals living on a council estate.” (So the representation of working class people in popular culture definitely is an issue that she ‘gives a shit about’.) The show’s pilot aired on Channel 4 back in 2013 and the series started last month. Its focus is two teenage sisters, Germaine and Aretha Garry (Helen Monks and Alexa Davies) who, along with their younger siblings — Yoko (Molly Risker), Mariah (Erin Freeman), Wyatt (Caden Ellis Wall) and baby Cher (Violet Maple) — are homeschooled by their Mum, Della (the excellent Rebekah Staton).

Della, the Garry matriarch, is an uber-confident, anti-establishment survivalist who takes no shit from anyone

Like many a comedy duo before them, Germaine (dark-haired, the eldest) and Aretha (ginger, the next in line) are opposites. Germaine is the Foolish Sibling. She’s a hormone-laden drama queen, who has no self awareness and thinks that life should be one long (naked) group hug. Aretha is the Responsible Sibling: a bright, pragmatic and spiky introvert who can’t bear her sister’s constant over-sharing. Her default setting is weary and deadpan. As you’d expect, the currency of their relationship is sighing, yelling and eye-rolling.

Moran’s right about the limited ways in which young, working class people are depicted on TV. More often than not, if they’re male, they’re shown as ignorant, feckless, unemployed, hoodie-wearing thugs with limited aspirations and no respect for themselves or anyone else. And if they’re female, they’re portrayed as one-dimensional caricatures of ‘prostitutes’ or ‘baby mothers’ and relegated to the outskirts of the action. So it’s refreshing to see a couple of young women who are none of those stereotypes and also happen to routinely use words like, “prescient”, “pejorative” and “unilateral”.

Another plus point is that Germaine and Aretha aren’t sexualised. Exaggerated femininity is not their bag and they don’t prioritise the pursuit of sexual attractiveness over everything else. But they’re still aware of the value that’s placed on it. At one point, Aretha tells Germaine, “fearsome intellect doesn’t look good in shorts.” Wardrobe-wise, Aretha favours variations on the theme of shapeless and oversized, while Germaine dresses as if it’s 1994 and she’s on her way to Glastonbury. The latter’s body is a source of comedy, highlighted by scenes in which she treats her brother and sisters to the sight of her camel toe and her too-tight pants firmly lodged in her bum crack.

Della, the Garry matriarch, is an uber-confident, anti-establishment survivalist who takes no shit from anyone. As well as smoking and dangerous driving, her main occupations are: hating her mum (who we never see), sharing words of wisdom like “take it from me, nothing makes an unwelcome swelling disappear faster than the sight of an axe” and preparing for what she considers to be an impending environmental apocalypse.

We’re supposed to love her and, despite a tendency to communicate through issuing orders and making statements about the sorry state of 21st century life, she gets a lot of the funniest lines, so it’s hard not to. The back section of a thong is, for her, “basically a bacterial superhighway from your bum hole to your business”. And before a shopping trip she informs Germaine that, “going into town will not make you feel like a special lady… It’ll make you feel sweaty, claustrophobic and poor.” However, although it’s great that Della is capable and independent, she does veer towards the kind of Strong, Female Character stereotype that has been criticised for being just as limiting and one-dimensional as the other exhausted standbys that mainstream film and programme makers hold dear to their hearts.

The other adult in the Garry children’s lives is their Grampy (Philip Jackson). Rather surprisingly, he enjoys heartfelt sing-alongs to the The Divinyls and Sheryl Crow, while his hobbies include drinking and making his daughter and grandchildren shudder by giving them rolling reports on his sex life.

So those are the main characters, but is Raised by Wolves actually any good? Well, it’s getting there. The opening episode isn’t a massive improvement on the disappointingly weak pilot. It’s a bewildering introduction to the characters through a series of set pieces of varying strengths. The Garrys go foraging for food at the local common, Yoko has her first period, Germaine gets her hand stuck in the letter box of what she thinks is the home of the lad she fancies, Lee Rhind (Kaire Zajaz), while Grampy has a shagathon. The point that his idea of what’s sexy is at least three decades out of date is made over and over again. It eventually comes to a head (pun intended) in a line which scores a 10 on the trying-too-hardometer: “I’ve got beef bourguignon, Michael Caine and a Vienetta. So knickers off love, forever’s gonna start tonight.” That’s pretty much it for the first instalment.

The best thing about Raised by Wolves is its choice jokes about periods and Della’s assertion that they shouldn’t be treated like some kind of unsavoury affliction. Both of which come as a bit of a surprise, because women on TV don’t usually menstruate. With her tongue firmly in her cheek, Germaine describes the sanitary protection part of what is obviously Boots as “the aisle of shame”. Her candid interpretation of the coy absorbency symbols on tampons and sanitary towels is as inspired as it is accurate. “One drop is just like ‘turn your knickers inside out, nothing’s really happening here.’ Five drops is Carrie.”

Slices two and three of life at Casa Garry are marginally better than the first. Episode two focuses on Della’s birthday, some emergency knicker-shopping for Germaine and a bonding session for Grampy and Wyatt. All of which sets the scene for some great observations about consumerism and gender. Della’s response to her Dad when he says that Wyatt has a girl’s rucksack is spot on. “It features a girl, Dad. That doesn’t make it a girl’s thing. You know, like strip clubs.” This could sound preachy and po-faced, but it’s not. It’s just that there are some serious points woven into the laughs and everyday dramas.

In episode three, we meet cousin Cathy (Erin Kellyman). She’s pretty, mean and has designs on Germaine’s beloved Lee. Germaine eventually manages to outdo Cathy in the nastiness stakes and learns about the wheel-oiling purposes of social niceties in the process but, in episode four, Cathy ups the ante by kissing Lee Rhind in front of her.

Four episodes in, Raised by Wolves has been consistently sharp and seasoned with some very funny lines. The performances are solid and the production is slick (there is some nice use of slow motion and overhead shots). The soundtrack is decent too: No Doubt, The Kings of Leon and Puff Daddy all get an airing. Unlike the sensationalist documentaries that define the people they focus on solely according to what they’re not (employed, comfortably off and well-spoken), Raised by Wolves offers a fond portrait of an unconventional and loving family who just happen to live in a council house.

However, it could also be said that Raised by Wolves is a bit self-satisfied and, if you’re being really unkind, that the Garry brood could be characterised as Quirky Kid one, Quirky Kid two, Quirky Kid three and a trio of small children. Because each episode is only half an hour long, it would perhaps be unfair and unrealistic to expect the depth or complexity of something lengthier. But, even so, the plots to date are thinner than a pair of 10 denier tights. So, although Raised by Wolves is engaging enough to keep you watching, it doesn’t seem like a show that will reach must-see status. It’s more of a warm-hearted and amusing time-filler.

Episode five of Raised by Wolves will be screened at 10pm on Monday (13 April).

Germaine (left) and Aretha (right) stand in front of a red brick house with their heads and shoulders visible from behind thick foliage. Germaine looks jovial and cheeky, while Aretha appears serious and scathing. By Dave King, obtained from the Channel 4 website.

Dawn was raised by Ghanaian parents and owes them the years she spent in higher education and a great deal of respect. She has inherited their love of starchy carbohydrates and brightly coloured prints