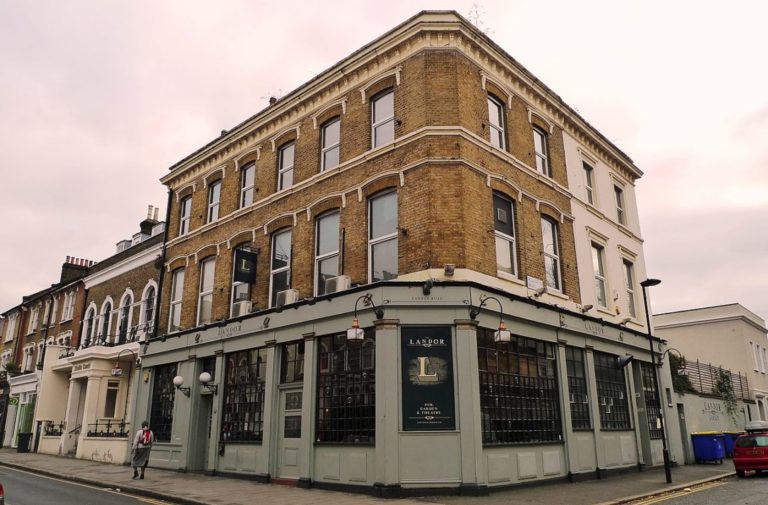 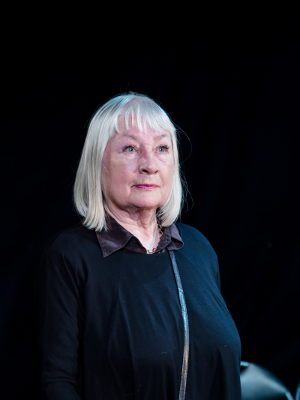 No matter what your opinion on sex work, it is difficult to argue that the system we currently have in the UK doesn’t need reform. Selling sex is technically legal, but running a brothel is not, meaning that women have to work alone or run a higher risk of being arrested. A review of the literature around sex workers undertaken by the UCL Institute of Health Equity finds that “the large majority of studies looked at in this report indicate that violence is a prominent feature in the lives of sex workers in almost all sex work settings.”

This is the issue that Rumpy Pumpy! attempts to address, with decidedly mixed results. The plot of the musical, which was performed at the Landor Theatre in April, revolves around Jean and Shirley, two respectable Hampshire Women’s Institute (WI) ladies on the search for the “perfect brothel” to keep working women safe. It is refreshing to see a nuanced portrayal of sex work. Popular television and stage representations seem to be oblivious to the fact that there is middle ground between the sexy Secret Diaries of a Call Girl and a strangled girl in a body bag at the beginning of an ITV crime drama.

There are some excellent performances here. Portsmouth brothel owner Holly is played with panache by Mandi Symonds. Her sweet voice – imagine a Northern Dolores Umbridge – initially seems at odds with her role as madam of the brothel. When she first strides about the stage, all dark lipstick and dark hair, she strikes the audience as a morally ambiguous character, especially as she reveals she takes 60% of her girls’ earnings. However, she is quickly relegated to being essentially a good person as the one-dimensional villain DC Hecks (Joanne Sandi) is introduced, complete with an evil cackle. Hecks is police officer intent on closing down the brothel both because she considers it immoral and because of her personal vendetta against Holly. 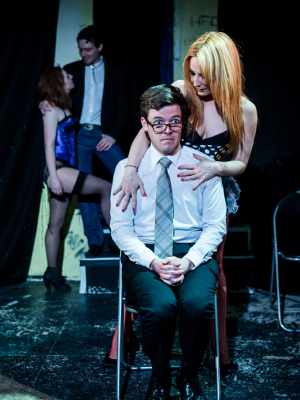 Perhaps unintentionally, writer and composer Barbara Jane Mackie delivers an over-simplified story about a host of complex issues. The first hint of this is when Holly makes the distinction between “her girls” and the “druggie street walkers”, soon after the women themselves declare they are “not scrubbers, not tarts and not slags.” In trying to prove the point that the legalisation of brothels will keep sex workers safer, Mackie is too eager to demonstrate that Holly’s girls are worth saving.

There is Trish (Scarlett Courtney) who is a police officer rejected by her family, Carol (Jennifer Harding), a law student with an ailing mother and Mags (Katie Mellor), a victim of domestic abuse. Trying to cram all strata of the justice system and victimhood into one brothel simply to make a point comes across as ham-fisted and unsubtle. The idea that these women would be somehow less worthy of help if they were addicts or had not held ‘respectable’ jobs previously is a deeply uncomfortable one.

The introduction of Jean (Valerie Cutko) and Shirley (Marjorie Keys) makes the plot even more problematic. Their claim that “the Women’s Institute represents all women” rings false and the musical number in which the WI sing ‘Rumpy Pumpy’ risks whitewashing difficult issues with Carry On humour. This is somewhat redeemed by the fact that Jean and Shirley are based on real women; the WI have been campaigning for the decriminalisation of brothels since 2007 and Jean Johnson and Shirley Landels led the way. Mackie spoke to the real Jean and Shirley, as well as sex workers and madams while researching Rumpy Pumpy! Yet still the musical feels more like a Calendar Girls spin-off than a real attempt to address the issues at hand. It is perhaps telling that Cutko and Keys’ chemistry is far less arresting than the relationship between the two self-proclaimed “Moss Side scallies” Holly and Mags. Jean and Shirley might have the best of intentions, but it is only when the sex workers speak for themselves that the production regains some strength.

Despite the problematic framework of the drama, all of the lead actors do their best with the material they are given 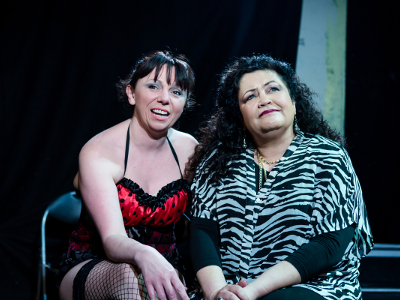 This is also true of the WI ladies’ globetrotting adventure in search of the perfect brothel. The most profoundly disturbing moment of the entire musical is the number ‘Come into the Bunny Park’ set in a ‘bunny’ brothel in the Nevada desert. It presents the sex workers as fun, flexible and desperately eager to please. They epitomise the false image of womanhood or, rather, girlhood that perpetuates the notion that sex work is acceptable because women enjoy or even deserve it. The line “no contracts for a bunny, no unions here” is particularly striking, highlighting the shameless way pimps will withhold money if a sex worker is too sad, too fat or too tired to please a customer. Jennifer Harding is especially outstanding here as Texas Tilley. The other strong musical number is ‘My Nemesis’, sung by Holly and DC Hecks in a prison cell. Symond’s voice gives you chills and makes you forget, just for a moment, that you are in a theatre. Despite the problematic framework of the drama, all of the lead actors do their best with the material they are given.

However, the dénouement does not make the most of the talented performers. DC Heck’s comeuppance is badly misjudged and comes off as insensitive towards both her sexuality and her religious convictions. Two badly developed subplots are quickly wrapped up by the arrival of two knights in shining armour. Jean and Shirley take a pragmatic approach to sex work by concluding that it will always happen, and therefore needs to be made safe. It seems like a sound principle, yet all of the women in Holly’s brothel are reluctant sex workers, forced into the trade by a desperate lack of money. Not only is this not representative of all sex workers, it also fails to address the circumstances that force women to sell sex for financial reasons. The WI, much like the musical itself, is full of good intentions but bites off more than it can chew.

The feature image is of the Landor pub and theatre and is by Ewan Munro. It is used under the Creative Commons Attribution-Share Alike 2.0 Generic licence. It is a typical Victorian corner pub.

The photos are by Richard Davenport and are used with permission. They all show images from the production.

Image 1: A woman with white hair and black clothes looks into the middle distance, resolute.

Image 3: A man in a shirt, tie, suit trousers and glasses looks perturbed, uncomfortable or surprised as a woman standing behind him as he sits runs her hands over him. In the background, a different woman in stockings and lingerie is being embraced by a more relaxed-looking man.

Suzanne Duffy is an English graduate working in communications. She enjoys chocolate, beer, theatre and feminism, often all at the same time. Her work has appeared in The Cambridge Student, edfringereview, Mancunian Matters and Manchester Mule