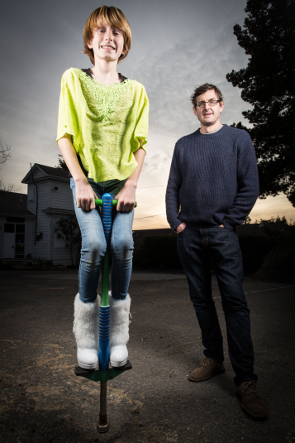 “Protecting the life of my child”

There are moments of great joy in Louis Theroux’s recent documentary, Transgender Kids. There’s a five year old girl lip-synching Lady Gaga with greater passion and presence than Gaga herself. There are teenagers who, having been dealt a raw deal in a ciscentric society, are nevertheless positive and articulate about their life experiences. There are parents and professionals working hard to do the right thing for the young people in their care. Yet there are also some moments of dehumanising ignorance and a predictable focus on genitalia which supports a persistent view of transgender people as medical curiosities.

At the top of the programme, set at the Child and Adolescent Gender Center at UCSF Hospital, San Francisco, presenter Louis Theroux warns us the issue of transgender children is “fraught with difficulties and raises questions about how old a child should be to make decisions that will affect the whole of his or her life”.

However, these questions are not really asked or answered in what follows. The very young children we meet simply aren’t enabled to make irreversible decisions anyway; a pre-pubescent child’s transition is an entirely social process. A little later, a child may take puberty-blockers, but their effects are reversible (a fact not clarified by the documentary). I’m sure there will be regulations in San Francisco, as there are elsewhere, about the ages trans children can go on hormone replacement therapy (one child implied this might be around 14) and the point at which a young person potentially becomes a candidate for surgery.

There might be a possibility they may change later, but they will be alive to change

When asked about the danger that a child and their family may set out on a course they later regret, Dr Diane Ehrensaft makes the situation very clear; “We have one risk we know about: the risk to youth when we hold them back and hold back those interventions. Depression, anxiety, suicide attempts, even successes. And if we can facilitate a better life by offering these interventions, I weigh that against there might be a possibility they may change later, but they will be alive to change.”

The father of Nicky, a 14-year-old trans girl, goes onto explain that he frames supporting her transition as “protecting the life of my child”. The transgender children are universally engaging, but the parents are one of the heartening positives about this programme. With one exception, they are all not only accepting and supportive of their children, but courageous in the face of real (and alas, realistic) fears about their future. The mother of fabulous five-year-old Camille describes how her daughter is teaching her to be “more authentically myself”. When Nicky’s mother cries at memories of life before her daughter’s transition, she explains, “I know her life is going to be a little harder, you know? She will always have something that she has to overcome, you know? Her future scares me a little bit.”

Unfortunately, Theroux’s voice-over and interview technique sometimes attempts to present more controversy and discomfort than seems to exist in the lives of the transgender children he encounters. When discussing past identities, he opts for “it” as an unnecessarily clumsy pronoun. Children are repeatedly described as having been born a particular gender, or being born with their dead names, as if babies pop out fully dressed, their names embroidered on pink or blue playsuits. Transgender children are described as “children who say they were born into the wrong body” even though, the younger kids Theroux encounters never mention their bodies at all and the older children only discuss the matter with heavy prompting.

The one child whose situation is genuinely fraught is that of Crystal or Cole, whose divorced parents differ on how best to raise their gender non-conforming child. Initially, it appears that the child is a trans girl, but that their father refuses to accept this. However, when Theroux interviews Crystal, they express contentment with living some of their time as Crystal and some of their time as Cole. Theroux concludes this interview, “Having spent time with both Cole and Crystal, I was still unsure which was the truer identity. Whether she had her true nature repressed or had never been trans in the first place.”

Despite the fact that Crystal describes themselves as “somewhere in between” when pressed on whether they are a boy or a girl, the possibility of being non-binary or gender fluid is not mentioned. One again, Theroux returns to this prospect of a terrible mistake, a fork in the road beyond which everything changes forever, while there’s little evidence of such pressure in the lives of the children featured.

Transgender Kids in no way attempts to be a medical documentary, but there is too much emphasis on transgender people’s experiences as a medical issue. Despite the fact that none of the children Theroux interviews in depth are candidates for surgery, we meet plastic surgeon Dr Curtis Crane, who shows Theroux photographs of phalluses he has made, proudly commenting, “I’d be hard-pressed to see this patient walking around a locker room and find someone who would say that’s not a male!”

It is understandable that a surgeon would be proud of his work, but further emphasis is placed on anatomical gender conformity when we’re shown a 17-year-old boy’s chest scars and the bulge in an older man’s Y-fronts. Later, when consulting with a patient, who requests the removal of her testicles but not her penis, Crane explains, “We’re trying to solve dysphoria. We’re not trying to put everyone in a box that the rest of society believes in.”

But by this point, the vital message — that a person’s gender cannot be determined by their body and vice versa — has become confused. Meanwhile, genital reconstruction surgery may be an interesting subject but it is one almost completely irrelevant to the issue of transgender children, existing only as one possibility in the dim and distant future for most of these kids.

Theroux rounds up with yet another reminder of how very difficult everything is, concluding with the foreboding sentiment: “In the end, the hardest part of the challenge may be knowing who it is we really are.”

Despite this, there’s been no evidence of such a challenge. Almost all the negative experiences of the featured children come from outside: a father who believes his child is too young to know their own mind, a grandfather who refuses to use the correct pronoun and school bullies who misgender a child and use homophobic slurs. Even Crystal/Cole, with the pressure to identify according to a binary that may not fit, doesn’t express any internal conflict about who they are.

In Louis Theroux’s attempt to make his documentary controversial, he may have failed to do full justice to the excellent material he had to work with: articulate children, loving parents and highly dedicated professionals trying to navigate gender identity in a cissexist world. However, I would still strongly recommend this programme to all parents, as a great lesson in how to come through for children when their life paths take an unexpected turn.

Louis Theroux: Transgender Kids is available on iPlayer until 7 May.

Crystal/Cole (left, foreground) and Louis Theroux (right, background) in an outdoor scene, with a white house in the background, at dusk. Crystal Cole wears a loose yellow top, blue jeans and white furry boots and is jumping on a pogo stick, while Louis is wearing a navy jumper, navy trousers and brown lace-up boots and stands with his hands in his pockets, his weight somewhat on his right leg and with his left foot forward. Both are smiling casually. Image Credit: BBC/Freddie Claire.

D H Kelly is an auntie and fabric fanatic. She is currently trying to grow pumpkins