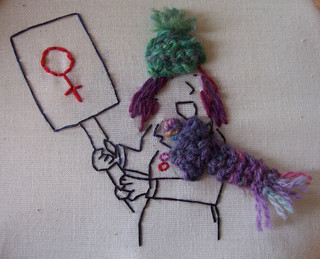 It’s time again for another weekly round-up and open thread. There are plenty of fascinating articles to read from the past week which we have linked to below. Personal highlights for me include Paris Lees’ write-up on Louis Theroux’s Transgender Kids documentary and Gemma Correll’s amazing feminist cartoons which were showcased in The Independent last week.

As usual, linking does not automatically mean agreement/endorsement from The F-Word and some links may be triggering.

From the article: “There is something really wrong with David Cameron. I would say that about any parent of a disabled child who would go out of their way to make the lives of other disabled children worse.”

From the article: “What’s the big deal if a feminine boy or a masculine girl changes their social gender? What is so wrong about supporting them to transition socially, or to delay puberty with blockers?”

From the article: “Guilt, of any racial variety, never achieved much anyhow (even if it did, there are therapists for that). It won’t close the pay gap, the unemployment gap, the wealth gap or the discrepancy between black and white incarceration. It won’t bring back Walter Scott, Trayvon Martin or Brandon Moore.”

Pregnancy, Obesity, And The Lies We Tell (Ravishly)

This is a response piece to this New York Times article – ‘Pregnant, Obese … and in Danger’.

Sussex police’s victim-blaming anti-rape campaign: why is it victims, not rapists, that must change their behaviour? (The New Statesman)

From the article: “This isn’t the first time that Dove has tried to flog its products through social-media-friendly pseudo-science. Indeed, it has conducted a number of similar, and wildly successful, experiments over the last few years, and has pretty much perfected a formula of calculated social experiment + statistics + sad background music + earnest message about beauty ideals.”

“I am one of those foreigners”: living with HIV in the UK (Open Democracy)

From the article: “HIV is easily treatable with pills. But there are no pills for stigma. Stigma grows on the ignorance behind the statement by UKIP’s leader Nigel Farage. There is no substance behind his words.”

From the article: “Reading the transcript of the Womans’s Hour programme broadcast on BBC Radio on the 9th of March I couldn’t help but be reminded of Rowan Atkinson’s TV advert for Barclaycard …”

Who cares about the vulnerable when there’s a fight to manufacture? (CN Lester)

This is a another response piece to the BBC Woman’s Hour discussion outlined on UnCommon Sense above.

Shared Parental Leave – a victory for men’s rights! (Girl on the Net)

Mrs, Ms or Miss: why do forms require women reveal their marital status? (The Guardian)

From the article: “Dear Channel 4, I am writing to you with the hope that you will stop ruining my life. While your obsession with my ethnicity is flattering, it has become somewhat apparent to me that you might have gotten the wrong end of the stick.”

Circumcise your 4-year-old or go to jail (Philly Voice)

From the article: “Heather Hironimus is one brave woman … she stands firmly against the court-ordered genital cutting of her 4-year-old son. Yes, you read the sentence correctly. Last month, Palm Beach County Circuit Judge Jeffrey Dana Gillen ordered Hironimus to sign consent forms and hand over her son for elective surgery – or go to jail. And yes, this is America.”

This is a response piece to the news that the government plans to make children who fail their SATs re-sit their exams.

The photo is by Cath Redfern and is used under creative commons license. It depicts a needlework image of a woman with purple hair. She is wearing a green hat and purple scarf and is holding a placard with a red ‘Venus symbol’ on it.