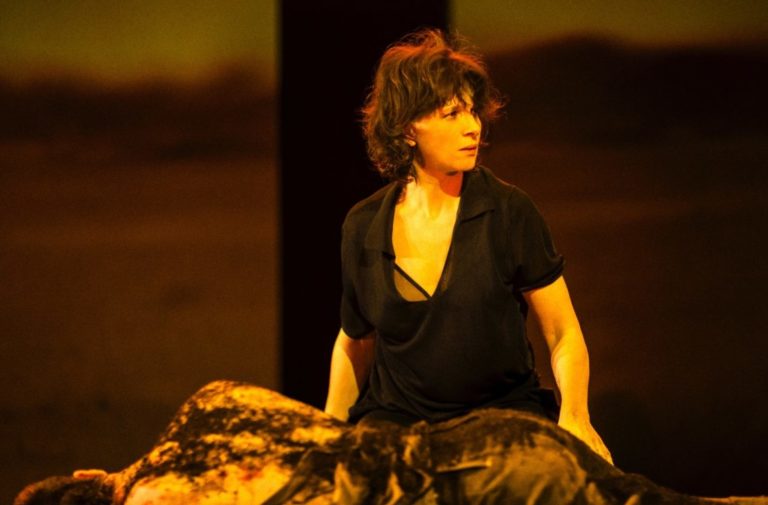 The antithesis of what Antigone should be

Given that Classical Athens was a deeply misogynistic place, it is amazing that so much of the drama surviving from that time casts women at the fore of the action. Not only do a high proportion of dramas feature female protagonists, even in the plays with famous male ones, such as Agamemnon and Oedipus Rex, those men are intrinsically wound up in the lives of women.

Antigone is one of the most famous of the Greek dramas featuring a female protagonist. Recently, BBC4 broadcast a recording from the Barbican’s recent production starring Juliette Binoche.

Antigone is a notable example of Sophoclean interest in the ever-present conflict between religion and state. It follows on from the aforementioned story of Oedipus Rex, another of Sophocles’ successful tragedies; by marrying and having children by his mother, Jocasta, Oedipus’ spiritual pollution risks the destruction of his city, while Antigone is one of the products of this incestuous relationship, along with her sister Ismene and brothers Polyneices and Eteocles. Since the events of Oedipus Rex, sisters Antigone and Ismene have come under the care of their uncle Kreon, the now ruler of Thebes. Meanwhile, in a battle for the city, their brothers Eteocles and Polyneices have managed to kill each other. 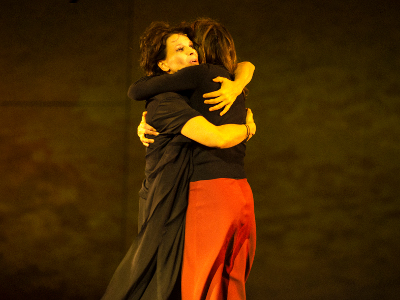 Kreon, being a tyrant of the most tragic type, has disallowed the burial of Polyneices, as he was an enemy of the city. Antigone, as his sister, feels spiritually obliged to perform burial rituals, a task that was part of female life. Juliette Binoche is a terrific actor and gives her all to the production but her casting, as well as that of Kirsty Bushell as Ismene, hampers the central message of the play.

There is a scandalous shortage of older female protagonists throughout our culture and there are many Classical roles, traditionally played by younger women, in which older women could be cast successfully. Ancient Greek theatre offers more prominent roles to older women than most of Western theatre: axe-wielding Clytemnestra, child-killing Medea, suicidal seductress Phaedra, queen-turned-slave Hecuba to name just a few. Antigone, however, is one of the only examples of theatre I can think of (the most obvious other being Romeo and Juliet) which absolutely requires a young actor to make the action work. Antigone is not just about female versus male or religion versus state; it is about youth versus age. For example, when Haimon (son of Kreon) sticks up for Antigone (his fiancée) and tries to carefully manipulate his father, this backfires and Kreon attacks his age. “Me at my age, go to school and get wisdom from this stripling?”

The sisters are, both in their own words and those of others, “girls” and there is something incongruous, if not plain funny, about seeing a pair of grown women on stage complaining that they cannot do anything about their situation because they are “just girls” in a world of men. But it goes well beyond this. Unsurprisingly, given her parentage and recent upheavals, Antigone is not the most well-adjusted of girls. She often dwells on thoughts of death, which are tangled up with her own developing sexuality (“Oh tomb, oh bridal chamber, oh house in the ground forever, I go to you…”) and she also talks about lying with her dead brother, mirroring the incestuous history of her parentage. In other words, Antigone is a teenager who, to modern eyes and in some respects, looks very much like someone identifying as Goth or Emo.

There’s recently been an explosion of Young Adult fiction dominated by young female protagonists, facing off against a tyrant in a dystopian world. Unlike Antigone, however, they tend to be archetypal strong female characters: self-possessed and physically tough young women who ultimately orchestrate successful campaigns. Antigone, however, while brave and self-sacrificing, has tremendous weakness. Her belief in her truth is all-encompassing and is not backed up by any cunning or political acumen which might give her cause a chance. 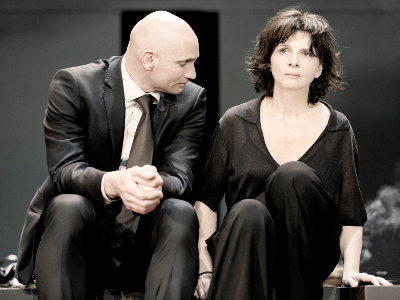 The best production of Antigone I have seen involved a very small girl facing off against a much larger and older Kreon. He physically intimidated her. She looked diminutive in comparison, but her fury was made more potent by being apparently impotent. Significantly, Patrick O’Kane’s Kreon lacks this ability to intimidate the much more powerful stage presence of Binoche. He is, in fact, younger than she and plays the character with too little bluster. In comparison, his argument with Haimon (played by Samuel Edward-Cook) is full of physical intimidation.

Antigone is also a story about siblings, particularly the contrast between Ismene and Antigone. Since Ismene has so few lines, she is easy to overlook. Her caution and reluctant compliance emphasises the power of Antigone’s rebellion. We also see the complexity of their bond — when confronted with the “crime” of Polyneices’ burial, Ismene attempts to share in the blame. However, Antigone rejects this – how dare someone try to take away from her achievements? This has always struck me as one of the most accurate representations of the childhood sibling bond in drama. There is something deliciously petty about Antigone’s reaction. However, in this pared-down production, the main actors double-up as members of the Chorus. Without the use of masks, as they would have in an ancient production, this leads to confusion. The actor playing Ismene who we should see only briefly to emphasise the character of Antigone, remains on stage, interacting with Kreon with coolness and irony, diluting the character of Ismene into a vague nothingness and thus rendering Antigone a much less dynamic character.

My other objection to the casting of Binoche might seem rather trivial, but her role in Chocolat (a film I very much enjoy) seems to be referenced from the very opening, with her walking against a wind. There are interesting parallels to the characters: firstly, both have had sexual experience that define them according to social mores; in Chocolat, Vianne is an unmarried mother, while Antigone is an unmarried ‘virgin’. Along with this, they are both persecuted by representatives of traditional, masculine, political control (who both pervert religious messages to suit their anger) and both driven by the dead remains of relatives, with peace only coming about with their eventual burial (in the case of Chocolat, the scattering of ashes).

It would be easy to look at all of this and say, “So what?” But Antigone has survived for more than one and a half millennia because it taps into something universal. During the Second World War, Anouilh, a French playwright, adapted the play under Nazi occupation. For audiences then, the image of an underdog girl facing off against Fascist oppression was blisteringly important. And so it should be for us; in the UK, we find ourselves in an increasingly difficult political situation predominantly peopled by representatives of a traditional power structure that is devoid of sensitivity to moral obligations. We need our young generations to see the seriousness of what can happen as a result of power struggles and the danger of idealism, regardless of one’s position. We need them to see that, even when under an oppressive patriarchy, women can set right male wrongs.

Antigone is available on iPlayer until 26 May. It was shown at The Barbican in March 2015.

The images shown are from the production and are used with permission.

Image 1: A woman dressed in black loose clothes kneels by what appears to be the dead body of a man. His back is to us as he lies on the ground, his lower half covered by a sheet, with dirt strewn over him. The woman is looking to the side, alert.

Image 2: Two people embrace tightly. One of them is the woman from the previous image; we can see her face and she appears to be saying something.

Image 3: A man in a suit and the same woman as before sit next to each other . The man has his hands grasped together as he looks at the woman (looking at her body rather than her face) and leans towards her. She is looking into the middle distance and leaning away; her expression is resolute.

Stephen Whitehead is a disabled Classics graduate who recently married a goldfish. He loves watching disaster films and taking pretty pictures. Whilst most of what he writes remains hidden, he sometimes blogs at Diary of Mr Goldfish and shares pictures on Flickr