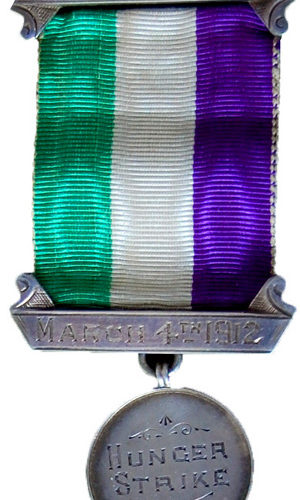 The quotations shown throughout are displayed at the exhibition.

The recent general election was a reminder of the women’s suffrage movement and how important the right to vote is. At the same time the Jewish Museum, tucked away on Albert Street in Camden Town, draws attention specifically to Jewish women’s involvement as suffragettes with the exhibition Blackguards in Bonnets. The London Society for Women’s Suffrage was founded in 1867, the Jewish League for Women’s Suffrage was founded in 1912 and by 1913 there are records of over 300 members, including both Liberal Jews and Orthodox Rabbis. From plays and tea parties to militant action and imprisoned hunger strikes, Jewish women played an essential role in the struggle. Their role was in many ways similar to that of other groups of women, but it is worthy of highlighting and celebrating the diversity within the suffrage movement.

“Dastardly crimes, of which suffragettes have been guilty… there are no lengths – or depths – to which these quasi-demented creatures will go in their madness.” – Jewish Chronicle 1913

When you enter the Jewish Museum the exhibit is to the left: a wall of women’s pictures, stories and artefacts is both striking and enchanting. As you make your way through the exhibition you are taken through the history of the suffrage movement with focus on the involvement of Jewish women and men. This is accompanied by individual stories such as that of Dora Montefiore who discovered in 1889 that, despite being entitled to hold money and property in her own name, she had no rights over her children having been widowed. Or Elsa Myres who resisted militant action so as not to risk her position as a teacher, until the school holidays when she was arrested for smashing a window and imprisoned under a false name for one month. She was released the morning her school reopened and made it back in time for her 9am class.

After visiting the exhibition I met its curator, Roz Currie, in a small café tucked away inside the museum. We discussed the exhibit and she was able to give me a little more insight into the context which made suffrage different for Jewish women. She explained that at the time “the question of what it means to be Jewish in Britain was in flux” due to the changing position of Jewish men in society. Throughout the 1800s Jewish men gained many freedoms that were previously denied them, such as going to university or openly joining the armed forces. Despite this, when Jewish women began campaigning for freedoms of their own Roz told me that many Jewish men felt these women were “jeopardising the position of the Jews.”

Despite the backlash by many men, there were others involved in the movement early on and their story is told too. Hugh Franklin was a Jewish man who followed in the footsteps of his mother and aunt. His militant activity included arson and an attempted attack on Winston Churchill; his activity resulted in him being sent to prison several times and being force fed 100 times.

Throughout the display there is an additional message that is often overlooked when responding to feminist movements and activity: what women are fighting for is not just the vote but also for their place in their communities.

However, had I not met with Roz this message would have been less clear to me, as she gave me additional historical context. Without a good understanding of Judaism at that time and the extra experience of not only being a woman but also Jewish, in a society that looked down on both, the difference and different experiences of Jewish and non-Jewish women are not very apparent.

Sprinkled throughout the textual displays are objects such as Gertrude Lowy’s hunger strike medal, the diary of a school girl pondering women’s place in society, as well as badges, fliers, posters and other such artefacts from the suffrage movement. The exhibition space is small but the exhibition itself feels big as I left feeling I had learnt a lot about individual women’s experiences; these stories were eye-opening and absorbing.

Considering 9.1 million women did not vote in the 2010 UK general election (we are awaiting the figure for 2015 but we know that only 39% of 18-24 year old women voted in 2010, compared with 50% men that age), Roz reminded me: “It was only 100 years ago that it was genuinely thought women were too hysterical and emotional [to vote], and will lead the country to ruin.”

“May God forgive them for consenting to the torture of women.” – Three protestors disrupting a Yom Kippur service 1913

After decades of struggle women over 30 were given the vote in 1918 alongside all men over 21. It was another decade before women were granted the same freedom as men in 1928. This would not have been achieved without the involvement and the power of Jewish women.

The exhibition balances history, personal experiences and fascinating relics. If you have any interest in women’s suffrage, I recommend going to the Jewish Museum and reminding yourself of the diversity and depth within suffrage.

Blackguards in Bonnets is at the Jewish Museum until 22 May 2015.

The image shows a hunger strike medal belonging to Gertrude Lowy. A green, white and purple ribbon is topped with a metal banner reading “FOR VALOUR”, with another metal banner at the bottom of the ribbon reading “MARCH 4TH 1912”. A metal disc hanging off the bottom reads “HUNGER STRIKE” with some decorative flourishes.

Mattie Lacey-Davidson is a trainee journalist with specific knowledge and interest in women in religion. Other interests include film, fashion, fitness and current affairs, all of which she tweets about @mlaceyd