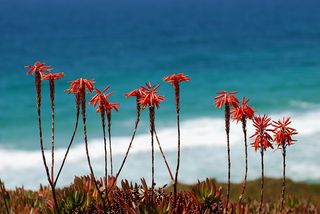 There may only be a handful of links in this week’s round-up sometimes short is sweet and there are still plenty of fascinating articles for you to read – with lots of focus on pop culture this time around! If you’d like to comment on one of issues covered or share another article that we haven’t included, feel free to get involved in the comments section below or on Facebook/Twitter.

Rebel Girls: Meet (Some Of) the Gal Pals of the Suffrage Movement (Autostraddle)

Amy Schumer’s coarse, playful comedy explores how women are complicit in their oppression (And forgives them for it.) (New Statesman)

On Learning to Love My Body: Because Summer Is For Fat Girls, Too (Autrostraddle)

Exclusive Interview With Kathleen Hanna And The Julie Ruin (Bust)

The image is used under the creative commons license and was found on Wikimedia Commons. Thanks to Alvesgaspar for allowing the image to be used. The photo depicts thirteen rather spiky looking orange flowers (described as species of aloe plant) set against a very blue sea in the background.