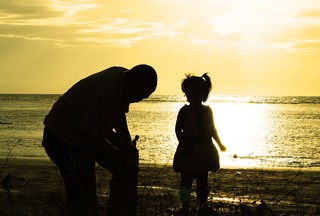 Why aren’t YOU a feminist? – a question from my wife

This is a guest post by Peter Nuckley, a Liverpool born, Yorkshire living, married father of two. He is a keen writer of poetry, novels and songs surpassed only by a love for whisky and classical fiction

“Why aren’t YOU a feminist?” My wife contemptuously asked of me, after a particularly long discussion with her sister on the role that men should play in the feminist movement.

” I… Erm…. Well…. I honestly didn’t know I was allowed to be one.” I replied, oblivious to the anger now building up inside her. “It has the word ‘feminine’ in it so I figured it wasn’t for me.”

As I said that I knew it couldn’t be right – it wasn’t just the fury written all over my wife’s face either, there was something more fundamental that had been stirred, something that I couldn’t yet verbalise. My wife put it into words rather loudly by reminding me that I have a daughter, a wife, two nieces, a sister and a mother.

Initially I asked myself: why couldn’t I be a feminist? Do I really know what a feminist is? Oh God, they aren’t all bra burning man-haters, are they?

After a few more questions, some serious and some ludicrously naive, I decided to look into these things, and holy fuck, I almost wish I never had! I’ve suddenly woken up and it is terrifying. In the UK one in five women will be a victim of sexual assault! The list of female relatives alone that my wife reeled off consisted of six women. How did it get like this? That’s not even mentioning things like gender inequality in daily life or the atrocities that go on in many other nations with different attitudes than we have in Britain. I see myself as generally a good bloke, however, I’ve started to realise that I’ve been burying my head in the sand for too long.

Where to start though? I alone can’t fix all the global problems contributing to inequality and violence, although we can all contribute. What I can do is gain the courage to stand up to people who are casually dismissive or sexist in the places I work and play. No more laughing along and trying to fit in with my peers – it is time to lead.

So, am I a feminist?

I’m sorry to say that I have got to 31 years of age with some wrong ideas of what a feminist is. I dare say I’m not alone in this and won’t be the first to point out that some of the portrayals of feminists in the media aren’t exactly flattering. So I tried researching beyond the media caricatures of feminism, to see where I fit in.

Day one’s research came up with “liberal feminism”, “radical feminism”, “anarcho-feminism”and a host of other things I didn’t quite understand, so I’m not exactly sure which one of these I would identify with. However, what they all had in common was equality – everyone must be treated fairly regardless of race, gender, sexual orientation, creed or any other category you care to divide a person into. If that’s what feminism is, then yes, I am a feminist.

Deep down I think most of us are feminists, just maybe we didn’t know we could be. The core beliefs of feminism are something that every fair-minded individual has woven into the fabric of their being. Every man that I know is respectful of women and believes in equality but few of them see a need to label themselves as feminists- they see this simply as part of being a decent bloke. Well fellas, in a perfect world there would be no need to label yourself “feminist” as equality should go hand in hand with being human – however, this world is far from perfect. There are men who think themselves better, or more worthy, than their daughters, wives, sisters and mothers. Don’t just shy away from this by thinking it’s not happening to you or your family. Put a name to what you are – you are a good bloke – you are a feminist!

I apologise to my wife for taking so long to recognise the importance of feminism and I look forward to helping her change the world.