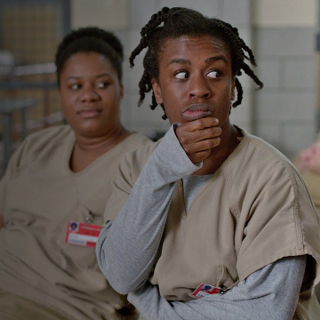 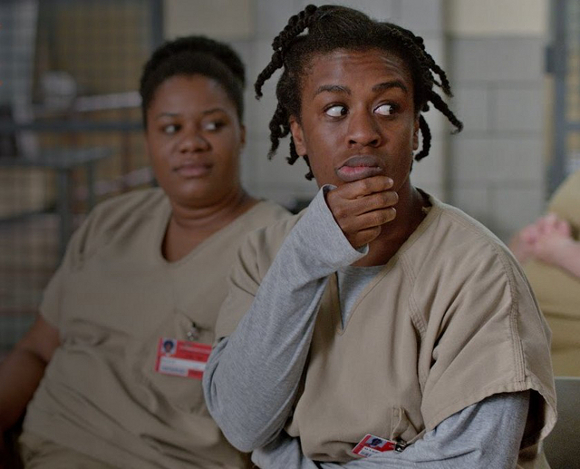 Litchfield is back! But as Norma says, at least compared to season two, in this first episode it’s a “whole new world around here. A kinder, gentler Litchfield”. It’s Mother’s Day, when all the inmates’ children can come and visit, and a fun day with games and treats is somewhat haphazardly pulled together in the grounds. V (Lorraine Toussaint) is gone; Rosa (Barbara Rosenblat) is dead; Red (Kate Mulgrew) is back from the prison hospital and her face is healing; Taystee (Danielle Brooks), Poussey (Samira Whiley) and V’s former cronies are all friends again; Caputo (Nick Sandow) is busy establishing his new world order; Diaz (Dascha Polanco) is still pregnant and grumpy; Bennett (Matt McGorry) is still wandering around awkwardly; Sophia Burset (Laverne Cox) is still queen of the salon; all is somewhat calmer. New counsellor, Rogers (Marsha Stephanie Blake) – a new smart and on it WOC counterpart to the casually racist, homophobic and misogynistic Healey (Michael Harney) – points out to Caputo that he “got caught in a shitstorm, but put up a sturdy umbrella”. Right now, Litchfield is sheltering uneasily under this, but it might be starting to leak.

Happily, some relationships in Orange is the New Black have emerged from the trauma of season two with renewed strength and greater social inclusion. Suzanne is still hanging out with Taystee’s crowd, “agreeing to disagree” over crucial issues like V’s possible survival and bonding over Harry Potter. There’s a sudden interest in witchcraft once it transpires that Wiccans are allowed midnight walks at the full moon under Caputo’s new, brighter regime. This is definitely the calm before the storm; there are far too many montage shots of happy children playing and inmates relaxing to last for long.

Perhaps unsurprisingly, this first episode thematically concentrates on motherhood, coalescing around love and responsibility and the conflict-strewn quicksand where the two collide. There are a lot of Mother’s Day flashbacks, as well as scenes of the inmates with their children, and we see scenes from Nicky (Natasha Lyonne) and Healey’s past lives for the first time. (Nicky has a wealthy New York background and an uncaring mother, while Healey’s is unstable and violent. Quelle surprise. Baby Nicky is the most adorable thing. Also quelle surprise.) The episode is all awkward attempts to bridge gulfs of experience and understanding, through good will and imperfect intentions, and sometimes they work.

There are reunions too. “The Betty Page of Litchfield”, Alex (Laura Prepon), is back, thanks to the intervention of Piper (Taylor Shilling). She’s all messed up and vulnerable – yes, I know! Alex! Crying! Doubting herself! What even? – and their tender greeting is a thing of beauty given added piquancy by Piper’s understandable but pretty shitty unwillingness to reveal her role in her lover’s renewed incarceration. It’s just like old times, but with more tears and snot. And I can’t be the only one who’s glad Laura Prepon is back in the building.

Watching the inmates’ various interactions with children offers a wealth of insight, whether it’s Sophia’s bonding with her son (Michael Rainey Jr) and edging around his new stepfather, Diaz’s family doing their best to bond with Bennett because “they’re family now”, or an as yet unknown inmate smuggling illegal substances in inside her baby’s nappy and then leaving the baby on the grass. Red’s collection of hulking great sons is adorable. There’s an amazing scene I can’t bring myself to spoil where a skull-clown-faced Big Boo (Lea LeLaria) addresses the abortion regrets of Pennsatucky (Taryn Manning) with socioeconomic analysis that would alone be worth the Netflix fee. Okay, it’s brilliant in a massively fucked up way – get the eugenic undertones – but still, it foregrounds both their characters and the ways in which problematic worldviews conflict and overlap in prison, with just enough pointed relevance to be genius.

This isn’t the only bit of criticism, either – as always, OITNB is pretty close to the cultural knuckle. I’ve never seen a show so subtle and nuanced in its attention to socioeconomic variation. Piper’s pill-based suicide plan gets called out for being privileged. Mendoza (Selenis Leyva) is told her eldest son has been suspended from school for truancy, and comments, “He missed some school so they make him miss more school. That makes no sense.” The poverty trap, right? But it’s the bitter irony that seeps out when the children’s long-battered piñata turns out to be empty and a wide-eyed privileged Soso (Kimiko Glenn) comments that “This is such a metaphor for their lives!” that gets me.

OITNB makes a point of showcasing the various sociocultural traps that put people in prison and exploring their human reality, and it’s hard to see so much human struggle reduced to synecdoche, not least by a character able to exclude herself from the group she describes. As always, the uncomfortable misogyny and racism that characters express is undermined by the three-dimensional and multivalent nature of those around them. The show is a rich tapestry of human aspiration and assholery, and it works.

My major criticism of this episode has been made before, by people who are better qualified to comment than I am. I’m cis, so your mileage may vary, but I agree that it might represent better progress if scenes with Sophia didn’t directly reference her trans status all the time. Laverne Cox is awesome, we all know that, and Sophia’s drawl is kindly and magnetic, whether she’s dealing with a rowdy queue or addressing cissexist assumptions from Morello (Yael Stone) with dignity and grace. Sophia fucking rocks. But every scene she’s in either has her referencing her history or somebody else bringing it up. Morello calls her a “ladyman”, as if it’s a compliment, she disagrees with her son’s new stepfather over the right way to shave and she offers her son “advice about girls…from a former man to a current man”. Respect to her son, who comes out with a brilliantly humanist retort to Sophia’s father’s recounted misogynistic advice, but it is, nonetheless, disheartening. It would be great to see Sophia doing her thing without having to go “AND I’M TRANS BY THE WAY” all the time.

That aside, this episode is love and responsibility all the way. If Piper loves Alex, how can she live with what she has done? (This being Piper, does she even care?) How do you parent someone or keep a life going if you’re in jail? How do you build a relationship with a child on one day a year? What happens if you don’t, to them and to you? How do you love someone if you’re in prison, with only the barest scraps of autonomy to survive with? How do you love someone on the outside? If they’re on the inside, does that make it better or worse? By the looks of this episode, all kisses and harmony and set-ups and sadness, quite a few people are going to be trying to figure all this out over the course of the season.

Cindy (background, left) and Suzanne (foreground, right) look to their left. Both wear beige scrubs and prison badges. Suzanne is wide-eyed and pouting at an angle with her right hand over her chin in concentration. Still from Orange Is The New Black, season three official trailer.