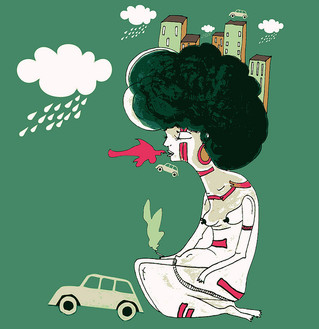 Alicia finishes off her guest post discussing her experiences practicing art in a female body. She interviews one of the directors of a new art space STRYX. This is What a Feminist Looks Like, the final instalment of SOUP, Part 1: feminism, will take place at STRYX gallery on Friday 5th June, 6.30 – 9.00pm.

As a follow-up, or post-script, I wanted to talk about the kinds of spaces, projects and collectives that are emerging as a response to the issues looked at in that piece: a response to the difficulties of maintaining an artistic practice while dedicating oneself to feminist causes and identifying as a female. STRYX is one such space. Based in Digbeth, Birmingham, the current inclusion in their diverse and engaging programme of exhibitions and events is particularly interesting with regards to a work/art/feminist space. SOUP, part 1: feminism is described as an ’emerging feminist artist residency’ and features the work of Birmingham-based artists Lucy Hutchinson, Emily Mulenga and Demi Nandhra. The residency will culminate in a Digbeth First Friday event on the 5th June. Over the past week or so, I have engaged in an email correspondence with Emma Leppington, one of the four directors:

ALICIA: I understand that Stryx is run by a group of female artists, and I wondered if this came about as a conscious decision or quite naturally? Your archive of shows is obviously not directly or exclusively ‘feminist’, but do you think it is important that the space is led with a feminist framework?

I suppose I am asking this with relation to STRYX’s current residency – could you also describe a little bit about this project?

EMMA:The fact that STRYX is run by four women is coincidental. We created a facebook group after graduating in 2012 to express interest in renting a space in Birmingham. It turned out to be only four women that were interested in the end. However, since then our agenda and programme has naturally magnetised towards feminist themes.

Many times, STRYX has been referred to as ‘a group of girls down in Digbeth with an art space’ or ‘women collective’. Never just considered as another art space, like Vivid Projects, Grand Union, Eastside Projects etc. We have also found that there is a lot of presumptions and bias towards STRYX just because of the gender of the directors. For example, a male artist once mentioned at an opening that he’d like to rent a studio from us, however, he understands its women only! We have never been women only. This has been assumed many times as again, we have only coincidentally had five women studio artists actively working in the space up until recently. We now have a man artist! Yay. We decided we wanted to offer a platform for women artists concerning this residency. We selected four artists. Birmingham based. Artist info is available on website xx

ALICIA: It is so hard I think to provide any kind of platform, as a female, and not be defined solely by your gender – whatever that platform might be for. Of course it is important to have female only spaces – there are plenty of places that men can exhibit, no problem! But I imagine a culture in which feminist concerns are addressed as something that ultimately affects society as a whole, which I feel like STRYX are succeeding in, by bringing these ideas into a broader context.

What is the contemporary art scene like in Birmingham in terms of accessibility and diversity? And has it developed since your graduation/the beginning of STRYX? There are a lot of great artist-led-spaces emerging over the past few years, which feels like a positive force in response to the tired institutional problems of the ‘big boy’ commercial galleries…xx

EMMA: Yes Birmingham has progressed and developed with so many exciting projects and spaces over the last three years; STRYX began, and then Vivid had a re-launch as vivid projects, Grand Union secured another three years funding, collectives such as FAM and Home for Waifs and Strays were formed. The Warwick Bar summer fetes started bringing all of the artistic tenants together every year. Schemes such as the Birmingham Art Map and Digbeth First Friday really do emphasise what Birmingham has to offer!!!! All this has started to happen since opening STRYX in 2012.

I do not find that there has been a significant increase in opportunities for Women artists or feminist spaces in Birmingham; however, a few projects here and there have come to the surface. Vivid Projects conducted the salons for discussions in 2013, and feminism was one of them, where I was a guest speaker. Kate Spence, director of Home for Waifs and Strays, a live art collective, often brings feminism into her performances. Or she invites guest feminists to BIRMINGHAM FOR DISCUSSIONS/EVENTS. STRYX and the feminist residency artists attend these feminist discussions (next one is on Sunday at 2pm if you would like to come along.

This is really all that I can think of that is happening at the moment, concerning feminism, I aim to initiate and encourage much much more!!