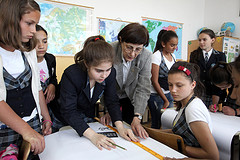 How sexism in schools is ‘exhausting’ young women

Melanie is a student, feminist and aspiring journalist who is passionate about equality and human rights. In her spare time she enjoys collecting wacky vintage clothing, spreading body positivity and cooing over her five cats.

I’m fifteen years old, currently studying for my GCSEs and I feel that sexism in schools is a massive issue. The last thing I want to hear when walking into school on a Monday morning are rape ‘jokes’ and go-back-to-the-kitchen ‘jokes’.

Many girls who openly support feminism are automatically shunned to the ‘feminazi’ corner, and if you ever say anything like “it’s so unfair that tampons aren’t free but condoms are” or if you’re caught in PE with hairy legs, you’ll automatically be asked, “Ew, are you some kind of feminist or something?”

Sexism amongst pupils in schools is something that needs to be tackled, it needs to be treated the same way as any form of prejudice. But in my experience, it isn’t.

In year 7 there used to be a large group of boys in school who would call me horrible names and grab me inappropriately – I now understand that this was sexual harassment. When I built up the courage to tell my school counsellor about them, he told me: “Sometimes that’s how boys flirt, they’re probably just flirting.” I felt as though I was overreacting about my situation and that I should have ‘taken a joke’- are other young girls in schools being made to feel like this too?

School is meant to be a safe learning environment, but how can girls feel safe when, according to Girlguiding UK, “up to 70% of girls and young women aged 11 to 21 report sexual harassment at school or college” and according to the World Health Organisation, “school is the most common setting for sexual harassment.” It’s not just happening to girls either, according to a report by the American Association of University Women, 40% of boys have reported sexual harassment.

Why aren’t teachers or school counsellors doing anything about it? I’ve had friends who have reported sexual harassment in school only to be told by school counselors that they are making it up. According to Girlguiding UK, “61% of 11 – to 16-year-old girls say teachers/staff sometimes or always dismiss sexual harassment as just a bit of banter”.

It seems like boys are also feeling the effect of it. Male friends have admitted that they feel under pressure to act ‘masculine’. Running, screaming or acting ‘like a girl’ means you’re a ‘wuss’, and feminine or openly gay boys often feel marginalised in their peer groups. This can have a negative impact on their self-esteem causing them to feel like they aren’t ‘manly’ enough – boys seem to be trying to show their masculinity in front of their friends by taunting and harassing girls.

Experiencing sexism on a day-to-day basis can be exhausting. It has a massive effect on the way girl and boys feel about themselves, on their self-esteem and even on their ability to perform well in school.

It’s possible that sexism isn’t being recognised as a serious issue in schools because we’ve grown up with it and learned to accept it. From toddlers boys are taught that it’s normal to play rough and tease girls and that it is bad to act ‘like a girl.’

Thankfully, more and more students and teachers are realising that there is a real issue and more charities like The SAFE Project and Brook are visiting schools to give awareness of domestic abuse and violence against women. This is a really positive start and I know that their lessons have had a great impact on pupils.

I hope that in the future teachers will take sexual harassment more seriously. I hope that the next person who reports a case of sexual harassment to a member of staff or councillor isn’t humiliated or put down by adults that they are taught to trust and are instead treated with the respect they deserve.

The image featured is used under the creative commons license and depicts female-presenting young people in a classroom.