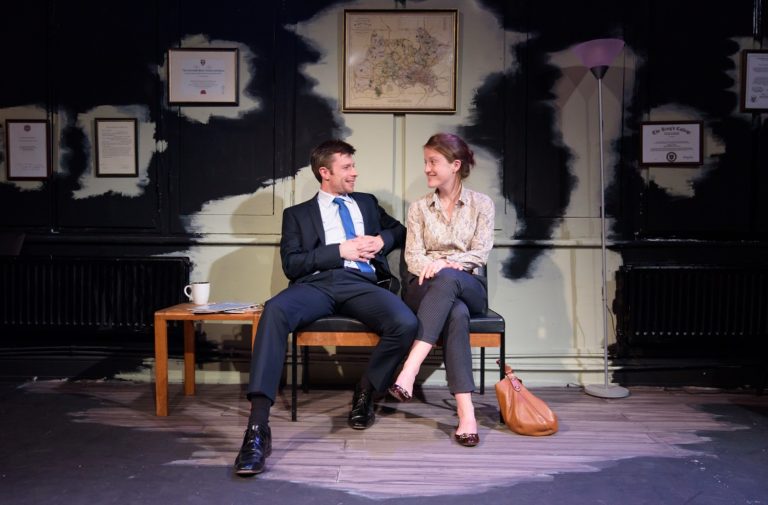 The Legacy is Angela Clarke’s debut play, and despite some occasional missteps it manages to be subtly thought-provoking without resorting to clichés. Esther (Claira Watson Parr) returns home from New York after a twelve and a half year absence for the reading of her father’s will. Over the course of an hour in a waiting room her conversation with her sister Rebecca (Lucinda Westcar) and her brother-in-law Adam (Jim Mannering) becomes steadily more fraught and builds to a shocking revelation. It is a simple premise which makes for a very realistic drama.

Unlike arguably the most famous dramatic example of a relative returning from a life in America (Harold Pinter’s The Homecoming) there are no huge role reversals here. Esther and Adam antagonise each other almost immediately and as their characters are quickly and firmly established it is difficult to imagine how it could be otherwise. Adam is casually handsome and immediately dislikeable, even before he begins spouting the plaintive cry of MRAs everywhere: “Who ever asks me if I’m miserable?” Mannering makes an art of being aggressively one-dimensional, as Adam reduces everything to “banter” and refers to a work colleague as a “top bloke” in a tone so laddish it made me cringe. In the after show panel discussion it was generally agreed that we’ve all met an Adam and that most of us wish we hadn’t.

Esther, on the other hand, is a feminist activist; Clarke was inspired by Columbia University student Emma Sulkowicz who carried the mattress she was assaulted on to classes and lectures. But Esther is also, in the words of Clarke herself, “totally fucking annoying.” The characterisation is the strongest part of the play, not only because of the believable performances of the three actors, but because the audience feels ambivalent, if not totally negatively, towards all of them. In such an intimate drama, with such a small cast, complicating the clear cut formula of antagonist versus protagonist was a wise decision by Clarke.

Esther’s serious approach, which most of the audience found irritating, doesn’t make her any less right, or her statistics any less stark 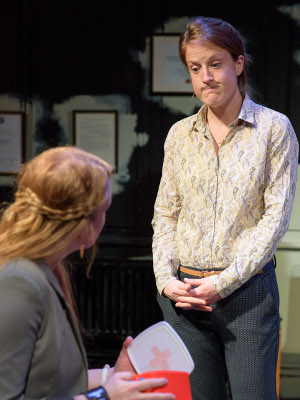 As the brilliantly expressive Watson Parr spouts statistics and talks about her therapist, always with an exaggerated look of martyred concern on her face, the character of Esther raises two important questions. First, do figureheads of feminism need to be likable? Holly Baxter, co-founder of The Vagenda, was on the after show panel and her presence raised the interesting point that many contemporary feminists are also satirists. Being funny is another way of being likeable, and Esther’s serious approach, which most of the audience found irritating, doesn’t make her any less right, or her statistics any less stark. As Baxter put it, “I didn’t like her [Esther] but that’s not what matters.”

The second issue is her relationship with her sister, Rebecca. Lucinda Westcar plays Rebecca as a stereotypical suburban mother, mainly concerned with good schools and the proximity of the nearest Waitrose. When Esther comes back into her life after more than a decade and tells her sister “you’re miserable” she comes across as patronising and presumptive; as Adam puts it: “Saint Esther’s here to preach to us all.” There is the temptation to pigeonhole her as the type of feminist who would berate stay-at-home mums and have strong opinions about whether or not women should breastfeed. Yet as the power play in Rebecca and Adam’s relationship becomes more pronounced and his repeated, grating use of “darling” begins to sound like an insult, the audience is forced to concede Esther has a point. As Rowan Coleman phrased it during the panel discussion,“It’s like Rebecca’s identity is slowly being sanded away.”

Although I would have like to see more development of the relationship between the sisters, the brilliance of the play is that is presents two fairly irritating people, Esther and Adam, to a mainly feminist audience, then questions why we still judge Esther more harshly. After the performance, the panellists discussed whether Adam was formed by the society we live in and whether it is acceptable to feel sympathy for him. Journalist Daisy Buchanan talked about the enormous pressure the patriarchy places on men to “succeed” within very narrow limits. Interestingly, no one drew attention to the fact that Esther was brought up in the same society but defies everything it expects of her. The irony of Adam believing that “the battle is won” and that feminism has achieved its aims, while at the same time sending his wife to fetch him cup after cup of coffee is not lost on Esther; the difference between them is that she is fighting back again the system that damaged her, while he is embracing it.

Buchanan pointed out that feminism is needed for men as much as it is for women: “It’s shit being a woman but I wouldn’t want to be a man either.” I’m not so sure. I wouldn’t want to be a Rebecca nor an Esther, but their demons are ultimately caused by Adam. It seems to me that The Legacy asks us to stop looking to women for the causes of our problems and Adam’s breakdown suggests we also need to stop looking to men for the solutions.

Photos are by Ben Broomfield and are used with permission.

Both show images from the production. The first shows a man and woman sitting next to each other and looking at each other. Both are smiling, but the man is relaxed, leaning back with his legs spread, while the woman is more contained, with a straight back and crossed legs. The set is realistic, with pictures on the wall, a lamp and a coffee table. The second image shows the same woman, standing up while she looks down at a second woman, of whom only the back of her head can be seen. The first woman is puffing her cheeks out as if she is considering something frustrating or difficult. The second woman is opening a red box.