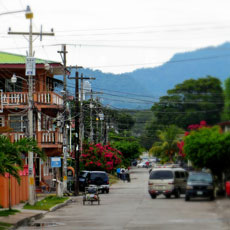 The ‘othering’ of sexual violence

Aspiring nomad and culture vulture, Issy Houston is 19 and has spent the last year living and working in Honduras with Project Trust. Issy is fascinated by the reasons behind gender dynamics in different cultures.

I hold my breath and half close my eyes. Maybe if I can’t see them, they won’t see me. When I smell hot rubber of the auto repair shop in town my stomach turns and I wince, ready for the harassing kisses, vulgar leers and lusting hands of men. I veer to the other side of the pavement, but today, silence. Relieved, I raise my head again and continue to walk until I felt the looming presence of a rattling motorbike slowing down just by my shoulder. My eyes flit across not wanting to make eye contact. What I saw was far more perverse than the goggling eyes. The hand, the unzipped jeans, the repulsion. Locking my eyes straight ahead, I waited it out, in disbelief until the bike had spluttered away and I was left with the sinister, mingling taste of dust and disgust.

This everyday hassle is just one end of the spectrum of violence in Honduras. In a country where one woman is killed every 18 hours, the most extreme form of gender violence, “femicide” (killings of women that seem to be related to their sex) has been described as a pandemic. Despite this, “The government of Honduras says one thing and does another” said Gladys Lanza from the Women’s Trinunal Against Femicide, “although it talks about its concern for the levels of violence in the country in general, it doesn’t even mention violence against women.” This major blind eye turning can be seen at a local level as 95% of cases are left un-investigated.

I was warned when I first arrived in Honduras, if something happens on the streets, going to the police just isn’t an option. The trend of increasing violence and insecurity has run parallel to the increased militarization of Honduras. The war on drugs has become a war on women as many of the troops put in place to combat drug cartels commit abuses. This cannot be brushed off as the inevitable result of a corrupt Honduran government divorced from the West. The 257% increase of femicide from 2002-2010 occurred just when the U.S. doubled its funding for military and police.

Just as the man in the street feels entitled to whistle, leer, follow and grope knowing there will be zero consequences, this form of institutionalised impunity sends the disturbing message that violence of this kind is acceptable. Rashida Manjoo, representing the United Nations, describes the alarming rates of femicide in the “black triangle” of El Salvador, Guatemala and Honduras to be “emblematic of a culture of hatred against women and a failure of a judicial system to protect them.”

Latino cultures are infamous for being “machista”. This extreme patriarchy where sexism and dominance prevail breeds a growing and tangible hatred towards women. Even in the reactions to progressive social media trends of pro-feminist men using #machoprogre and #machohipster there are traces of this misogyny which is so hard to shake. A man who calls himself a feminist is seen as forward thinking and respectful whilst a female claiming the same beliefs is bitter, angry, a “marimacha loca”.

But this response is not specific to Latino culture. ‘Western’ cultures are often quick to cast judgement on misogyny in cultures other than their own. This ‘othering’ allows them to condemn what they see as ‘barbaric’ behaviour whilst keeping themselves firmly on the moral high ground. But it is not enough to simply dismiss this behaviour as part of a ‘foreign’ culture. Whilst we are busy externalising the issue of violence against women through applying this lazy stereotype to Latin American men we don´t realise that our own corrosive understanding of masculinity is engendering violence at home.

Few words instil such acutely negative reactions in men as “the f-word”. In the case of Poppy Smart, the media backlash which vented against her having reported a group of builders to the police for sexual harassment shows that in Britain, we have not agreed that a woman should have the right to walk down the street wearing whatever she chooses without being harassed. Double standards for men and women exist internationally. We can’t point the finger at Latino culture for this hatred towards women; our own hands are not clean.

Even the whole culture of “machismo” has its roots in the Spanish colonization of Central America. The patriarchal image of the conquistador- physical strength, hypervirility and aggressively masculine behaviour of “machismo” tended to by the model of “marianismo” the image of “Mary meek and mild” as the archetypal female; compliant, vulnerable and enduring of suffering. Souped up notions of masculinity versus submissive femininity are not uniquely Latin, they form the basis of gender constructions in almost every society.

However much we try to distance ourselves from “machismo” culture -whether it be veering to the other side of the pavement or branding it as a Latino problem- the inescapable truth is that it pervades all cultures, worldwide. Yes, the extremity of violence against women in Honduras calls for more dramatic and urgent change but gender inequality knows no country or culture better than any other.

Where there is hatred and violence, nobody’s conscience can be clear.

The image used shows a colourful street in Honduras with cars and flowers and is used under the creative commons license.