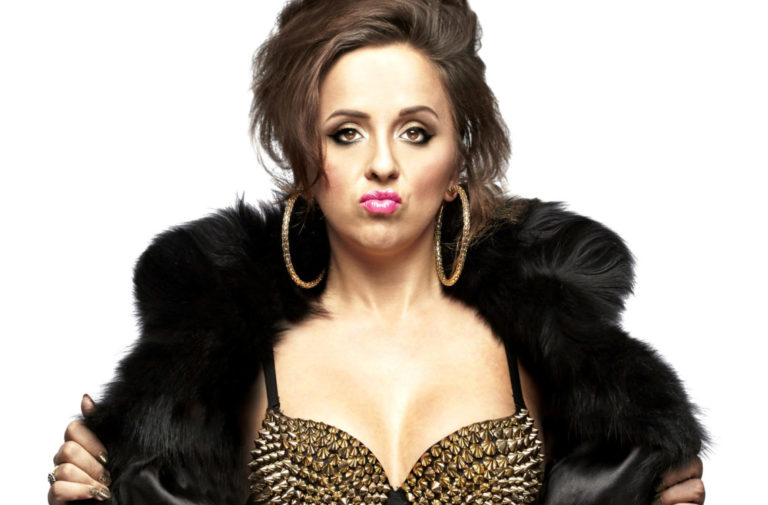 Badass and disinclined to diet

During Luisa Omielan’s Am I Right Ladies?! stand-up show, she criticises a diet that will allow you to lose a stone and a half in two weeks. Seconds later she turns her focus on the audience and points out that a not insignificant proportion of us will have wondered what that diet is. I suddenly realised that it was true: despite not being very conscious of it, I had noted the line and bookmarked it mentally for further investigation.

It’s this level of observation and truth-telling that makes Omielan and her show so commanding. Again and again she tells anecdotes that are all-too-familiar and shines a light on situations that are unconscionable and yet continuously recur. She recognises that we can rage against the societal restrictions on us while complying with them and that the urges to both fight and fit in are complexly tangled.

Some areas are particularly successful. Body image and dieting is one of these, whether this is discussing the pleasure of delicious food being marred by a friend who loudly considers the calories of every bite, or being told to lose weight by a Hollywood executive.

I’m also totally on board with her views on sex. Open and accepting, she champions a world where we are free to fuck or not fuck whoever is mutually agreeable. The tales she tells are mixed, which is in itself welcome. While bad sex is often funny, it’s so rare to hear about sex that is imperfect but pleasurable, when a woman enjoys herself while being in a realistic, recognisable environment. You can have sex with people who you don’t even like that much and have a good time, or, of course, have a bad time with people you love. The message is simple but effective.

Can we make “pleasure angel” a thing?

But Omielan’s messages go beyond this, as she criticises the treatment of women who have sex, particularly out of relationships. She details the thought process on running into a previous one night stand with compelling precision that makes the standards that women are held to in this scenario starkly clear. Further to this, she decries the derogatory use of words like “slut”. While it would be my preferred course to neutralise and reclaim words like these, I’m also happy to go with her suggestions of alternative words to describe women having a lot of sex; can we make “pleasure angel” a thing?

She also deals fantastically with the topic of depression. After eventually seeking help from her GP, she was astounded to be told that one in four people have been on anti-depressants. For her, this fact was absolutely crucial: she wasn’t alone, she wasn’t an anomaly, her experiences were valid. She talks frankly about her experiences, both before and after taking medication, in a way that is refreshing, honest and meaningful.

In case there was any doubt, all this is done while being very, very funny. Omielan’s way with words make her a fantastic comic storyteller. Using episodes from her own life, she is articulate and vulgar, a word that I am using in a very positive way here. She is one of us, if only we were hilarious and insightful. Within minutes she has the audience on side: laughing, cheering and dancing. The atmosphere is jubilant and we hang on her every word.

It’s easy to get caught up in the positivity and adrenaline, but there are a few moments in Am I Right Ladies?! when I don’t think Omielan is actually right. At one point, she describes an experience in Singapore that made her re-evaluate how she appraises women, realising that context is important. There’s nothing wrong with that. However, the framing is uncomfortable: she segues from talking about the woman she met in Singapore to telling us to keep in mind that in some countries women can’t vote or drive, and therefore those of us living in the UK should take advantage of the opportunities we have. The link doesn’t seem fair, Singapore not being a country where women can’t vote or drive.

All countries have gender inequality in some form or other and the UK isn’t a shining example in all categories; it isn’t helpful to position countries against each other as uncomplicatedly “good” or “bad” for women. Omielan has spent much of her show doing an excellent job of exposing the subtle and various ways women in the UK are affected by societal sexism and her message here that we are in a better position than others so have no excuse not to be forging ahead undermines the recognition elsewhere in the performance that it’s not as straightforward as that.

The show has a couple of other tensions in it, such as an early expression that the only thing Omielan wants is a man contradicted by a later, more earnest plea for women to aspire to (and be allowed to aspire to) things other than relationships, particularly with respect to careers.

But perhaps Omielan’s message is more in the overall picture than the detail. I don’t leave feeling confused or conflicted; I leave feeling inspired, rejuvenated and badass. She ends with three key things she wants us to take away from the show: have as much or as little sex as you want; remember that you are not alone if you are depressed; and don’t diet. These are all themes that are clearly threaded through the show and I’m happy to take them away with me. Perhaps Omielan’s show doesn’t always strike quite the right chord but it clearly has an impact on everyone in the audience. Relatability is key to being persuasive and Luisa Omielan is powerful despite but also because of her flaws.

The image is of Luisa Omielan, a young white woman with dark hair, holding her fur coat open to show a studded bra and looking fiercely at the camera

Am I Right Ladies?! will be at Assembly George Square Theatre as part of the Edinburgh Fringe Festival from Thursday 13th August until Saturday 15th August 2015