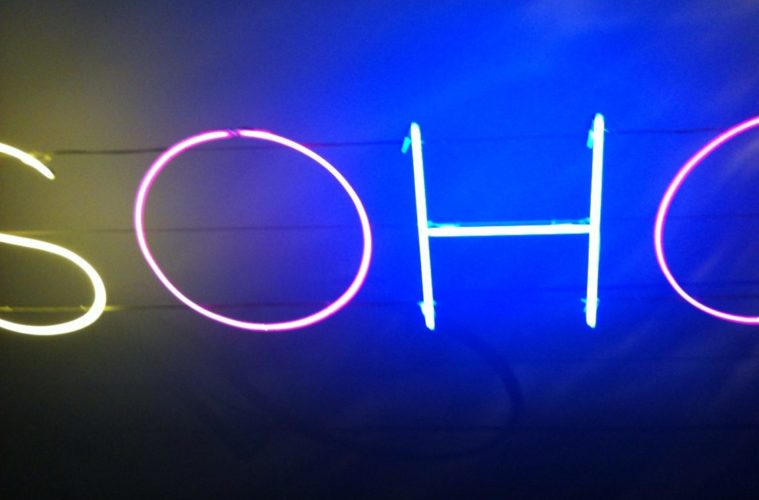 Naomi Paxton finds beatboxer Grace Savage’s show powerful, with a display of impressive talent combined with a critique of the sexism that has accompanied her rise 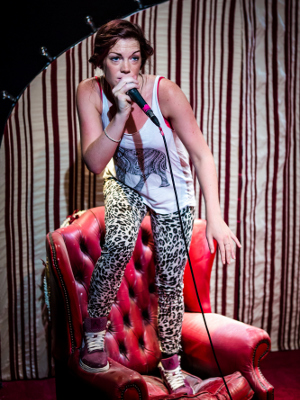 In the upstairs studio of the Soho Theatre, Leeds-based theatre company The Paper Birds and beatboxing champion Grace Savage have devised a show that is intimate, witty and full of energy.

Savage made a memorable appearance in Home at the National Theatre in 2013, playing a pregnant teenager who communicated entirely through vocal percussive sounds. Here, in Blind, she tells us about formative moments in her life so far: her desire to perform, mimic, challenge authority and fit in. We first see her as a shadow, play-acting the role of her mother giving her away to a circus as a baby. This fictional circus theme is echoed in the footlights of the set, designed by Fiametta Horvat, and Savage’s first costume, a hybrid collection of corset, hooped underskirt and Nike trainers. The stage is sparse: a large red armchair the only piece of furniture, set in front of a backdrop of red and white striped fabric. This fabric acts as a screen, not only for the shadowy figure of Savage’s mother but also a number of projections. There’s a nice moment later in the show when Savage carefully emerges through a gap in the fabric while we are watching some footage of Ella Fitzgerald improvising, keeping the relationship between both performers and their past and present audiences fluid.

Savage encourages the audience to try some basic beatboxing sounds, recording the resulting rather scrappy attempts as a way into the first demonstration of her skills. This immediate audience interaction is cleverly managed, setting up later material and giving us a flavour of just how talented Savage is. Facts about the development of beatboxing are woven deftly into the show, as is an exploration of the pervasiveness of pop culture, soap operas and advertising jingles in Savage’s musical education and . She mixes live, just-recorded and pre-recorded sound to take the audience through the stories she tells, whether that is the disturbing recollection of witnessing sudden violence or an attempted heart-to-heart with her mum. In one moment towards the end of the show we, the audience, are asked to cover our eyes as Savage encourages us to listen to a mix of soundscape and live performance. Her beatboxing skills and musicality punctuate the show: an emotional expression of her excitement, frustration, anger and joy that both comment and underscore the stories she tells.

The sexist and narrow self-interest the comments display contrast completely with the presence of the bright, thoughtful and eminently versatile woman they mean to objectify 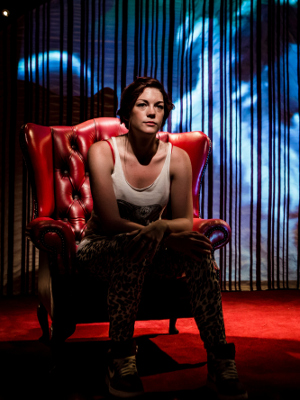 Savage is an engaging, intelligent and confident performer. The issues of her insecurities about and awareness of her sexuality are lightly handled as part of (but not the focus of) her story. There are times in the show when her confessional, colloquial style of speech changes into more formal, scripted scenes or moments of physical expression. The transitions in and out of these moments of acting, rather than direct address, are occasionally a little clunky but Savage’s confidence on stage avoids any potential moments of awkwardness. The set feels a little cramped at times, constraining rather than framing the performer, and the occasions when Savage steps out of the playing area and into the surrounding space work well.

The programme notes for Blind say that the show “is about growing up… about discovering who you are, or who you want to be… about finding a voice.” Although we know that Savage is now a beatboxing champion, the show just takes us up to her first live beatboxing battle at the age of 22, a confrontational convention of the male world of beatboxing that she does not enjoy participating in. Her journey of self-discovery and hard work has taken her to a place in which she fits in and yet does not, in which her gender others her and makes her vulnerable.

The end of the piece is the most overtly feminist section: Savage beatboxes and sings a series of sexually explicit popular songs describing sexual objectification and violence against women while quotations from YouTube comments that both praise and belittle her vocal skills are projected behind her. The most shocking and unpleasant of these seem to echo the misogynist views expressed in the songs, focusing as they repeatedly do on Savage’s beatbox talents as evidence for her potential proficiency at fellatio. Although these views are not unexpected, director Jemma McDonnell and Savage are to be commended for their stark presentation of them. Obsessive and unpleasant, the sexist and narrow self-interest the comments display contrast completely with the presence of the bright, thoughtful and eminently versatile woman they mean to objectify.

Blind is an ambitious and self-aware show that wears its heart on its sleeve. Savage is a ball of energy and skill, and her desire to communicate her story comes flowing over the circus footlights. Her performance is brave, bold and seriously impressive.

Blind is running at Soho Theatre Upstairs, which is wheelchair accessible, until 25 July, 2015.

The feature image is of a neon sign saying “SOHO” and is by Lindsey Berthoud on Flickr.

Naomi Paxton is a performer and researcher