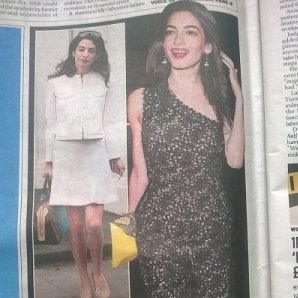 Is it too much to ask?

Alexandra Collinson asks why the media continues to sideline the careers and achievements of famous women in favour of their dresses and husbands. 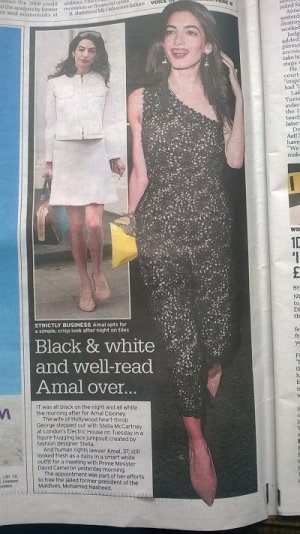 I recently came across a rather interesting article in a leading tabloid newspaper on the subject of human rights lawyer Amal Clooney. Only she was not immediately depicted in her role as a lawyer; instead, she was addressed as the wife of George, ostensible “Hollywood Heart-throb”. The article consisted of an image of Amal- the kind of feature in which there might be a few lines of text beneath, usually to be skimmed over- portraying her outfit transitions, intriguingly from black Stella McCartney, to some “simple, crisp” white confection. A single line on her current legal case, like an insignificant afterthought, followed a thorough deconstruction of her fashion choices. It was reminiscent of those cheap PPI adverts on TV, I thought, that manic voice that skims quickly through the terms and conditions and all the stuff they don’t really want you to hear at the end. It eventually stated that she had been in talks with the PM over a high profile case involving the release of the jailed former president of the Maldives, Mohamed Nasheed, evidently deemed negligible in the face of such integral styling statistics.
It took me a little while to absorb a few major pointers that distanced this particular article from the run-of-the mill celebrity pieces.

Amal Clooney, human rights lawyer and all-round respected, valued individual, had been reduced to nothing more than a glorified clothes horse, defined only by her marriage to a Hollywood actor, all in the space of a few careless sentences.

To many, it may seem exaggerative- but you see, this is where the malignancy lies. It is subtle, it is pervasive and it was simply dripping from this article. Sexism. In this case, the presumption that a woman’s interests and capabilities lie solely within her clothes and her choice of husband as opposed to her career.

The message is this: Yes, Amal, your work is all very riveting, but wouldn’t you rather be defined by your husband’s fame and the fabric that covers your body?

How this crap was even allowed to be published, I have no idea. But the media is a prime purveyor of all that is prejudiced, and there is no way in hell that if the roles were reversed, George Clooney’s designer suit and its particular hue would be analysed to the nth degree. Instead, we would have a full page spread elaborating upon his dealings with the case and subsequent contribution to all that is right and just in the world.

Is it really so difficult not to resort to this hideous stereotyping? I think not. The media holds such a huge responsibility to spearhead feminist ideals – not a burden, but something to be carried forward with pride, on a platform too big to be ignored. As with many cases of sexism, this article blundered from word to word in sheer ignorance; the writer was more than likely unaware of the fact that they had single-handedly diminished the extent of Amal Clooney’s expertise by shifting a disproportionate amount of attention to her bloody outfit, of all things.
I wouldn’t care if there was a cross-examination of, say, David Cameron’s get-up in the paper to accompany that of Amal; there could be an equal supply of men to accompany the endless stream of fashion critiques on female actors, musicians, politicians and more that are published on a daily basis. Or even- dare I say it- a woman’s achievements could be celebrated in the same way her male counterparts are. She could be taken seriously, as an actual human being with talent and boundless attributes instead of, well, a mannequin for designer clobber.

Either of these very reasonable, very accessible compromises would create a small portion of equality. Something simple. A simple change to make. Something that educates or reminds a little section of the world that, when it comes down to it, everybody deserves recognition, without some stranger sidelining their real-world achievements for the sake of a dress.

Really, is it too much to ask?

Alexandra Collinson is a North-Eastern literature student, fan of The Great Gatsby and anything by Caitlin Moran. Her interests include creative writing, spreading the feminist word and correcting people’s grammar.