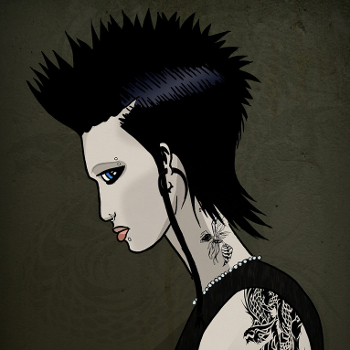 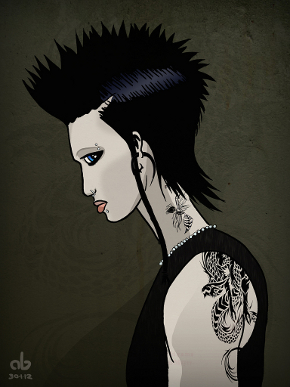 Full disclosure: I love Stieg Larsson’s Millennium trilogy. I would have devoured each of the hefty tomes in a matter of hours, if it weren’t for the contrary drive of not wanting to finish them too soon. For me, most of the appeal of the books—apart from the important social issues discussed, gripping storyline and excellent writing—is undoubtedly thanks to the wonderful female protagonist who I was rooting right from the start; it was love at first reading. Even though the infatuation was not that obvious: Lisbeth Salander is not your typical hero, who is unambiguously nice and good. Indeed, some might find her methods appalling and unacceptable, but she only does what she has to do when faced with an oppressive, unfair and discriminatory system created and maintained by men who hate women.

So, what is Salander like? As mentioned, she refuses to be passive. She is fully independent and experience has taught her to be wary of others – she finds it hard to let other people in and is very secretive, always keeping to herself. It has been suggested that Lisbeth might have high-functioning Aspergers, and while this interpretation is not accepted by everyone, some characteristics match the common markers on the autism spectrum: she’s a genius with eidetic memory, but lacking in social skills (and in her case this does not simply mean an inability to do small talk). She is tech-savvy and uses her skills both for work and illegal activities. Last but not least, sexuality plays an important role in the construction of Salander’s character. At first glance, she is simply bisexual. However, she herself would refuse this label. It just doesn’t matter for her who she sleeps with. She doesn’t identify as anything, she just is. Lisbeth Salander is a truly original and unique person; yes, person, not really a character, as she seems to be made of real flesh and warm red blood.

And so, about a year or so after I finished reading Millennium, I came upon The Good Wife. I’d heard it is really good, so I expected something more than your regular, run-of-the-mill show about lawyers. I was not disappointed: the story of Alicia Florrick (Julianna Margulies), who is dealing with the aftermath of her district attorney husband’s involvement in a sex scandal, immediately grabbed me.

When Kalinda is first introduced to the show, I instantly think of Lisbeth Salander

But it isn’t the main hero who has stolen my heart as much as one of her co-workers, Kalinda Sharma (Archie Panjabi). When she is first introduced to the show, I instantly think of Lisbeth Salander. Kalinda is a private investigator; while she might work for the law firm, she is actually an independent contractor. Like Salander, she has highly developed computer skills and does not shy away from employing them for illicit activities. She also has a dark past, involving a dangerous ex-husband, and is very private about her life. Although she befriends Alicia pretty much straight away, she never lets anything out about herself.

This atmosphere of mystery especially concerns Sharma’s sexuality. From the outset, we see her involved with both women and men; however, when at the end of the first season Alicia asks her if she’s gay, Kalinda responds “I’m private”. As their friendship grows closer, she eventually comes closer to answering this question but her response is still very ‘Kalinda’. “I’m… flexible”, she says, with a sphinx-like smile on her face. However, Sharma’s attitude towards sex varies from Salander’s in that the latter is very straightforward, and sex for her is just for the sake of sex. Kalinda, on the other hand, frequently uses it to get what she wants, sleeping with police and FBI agents in order to acquire information she needs.

All in all, I see Kalinda as a sort of Lisbeth Salander lite – she’s not as much antisocial as she is just not that sociable, but she is also not as gifted as her Swedish counterpart. But even this moderate version of Lisbeth really appeals to me, and has kept me loyal to the show—otherwise also brilliantly written and full of complex characters—throughout the years. It was disappointing when Archie Panjabi left the show at the end of last season. Interestingly, though, the reason she cited was that Kalinda was such a strong character that the creation started to take over and influence her other roles, particularly her part in The Fall.

If Kalinda Sharma is a reduced, moderate version of Lisbeth Salander, then this process has gone even further in the case of Cameron Howe. Portrayed by Mackenzie Davis, she is one of the main characters in AMC’s Halt and Catch Fire. I find this show about the early years of personal computers, with its outstanding acting and ingenious script, quite underappreciated. Luckily, someone ‘at the top’ must have liked it, too, as it is currently in its second season, which I’m finding even better than the first.

Cameron is a wunderkind – a prodigious coder who leaves college in order to change the idea of what computers are. In the second season, she’s basically running her own online gaming start-up called Mutiny. However, she refuses to be the boss and shies away from any hierarchy; as the name itself suggests, Mutiny is anti-establishmentarian and gravitates towards anarchist principles. Cameron is also stubborn and uncompromising, which sometimes proves an obstacle in trying to make things work. Fortunately, Howe’s rebelliousness and lack of flexibility is counterbalanced by her more mature (and older) co-workers.

Like the (stereo)typical IT geek, Cameron’s social skills leave a lot to be desired. However, she is much more sensitive than Salander and Sharma, and her defiance seems to be rather more of a defence mechanism than true personality trait; she might be against the system (and, thanks to her love of punk, Halt and Catch Fire boasts one of the best soundtracks ever – there is even a “Cameron Howe” playlist on Spotify, which I thoroughly recommend) but she’s not against relationships. She learned to be wary, though unlike with Lisbeth and Kalinda, her reasons do not lie in the past, but in the first season of the show. She is also unambiguously heterosexual which sets her apart from the other two.

In the end, while Cameron Howe might be a rather distant relative of Lisbeth Salander, her computer genius together with anti-system beliefs, love for counterculture and a refusal to conform to the image of women imposed by society (from succeeding in a profession that is considered typically male to her nonchalantly unshaved armpits) make for another surprisingly likeable character.

As a constant admirer of Lisbeth Salander, I am happy to see her possibly inspiring creators of TV shows. After all, we are always in need of strong, multidimensional, unconventional female role models, and popular programmes are a great way to promote a more active image of women and help change our position in society. Let’s hope there will be more characters written like this, not imitating, but using, modifying and transforming this new archetype. I am certainly looking forward to seeing this trio expand.

Left-facing head and shoulders drawing of a thoughtful, slouching and unsmiling Lisbeth Salander. She wears a black vest top, with her customary wasp neck tattoo, dragon arm/back tattoo and black spiky short haircut with a long strand in front of her ear, which sports a black horn earring. She also wears a small standard nose ring and labret stud (lower lip). The background is grey with a light wash of Lisbeth’s dragon tattoo and “ab, 30.1.12” is written in the bottom left corner.

By Aaron Booth, shared under a Creative Commons License.