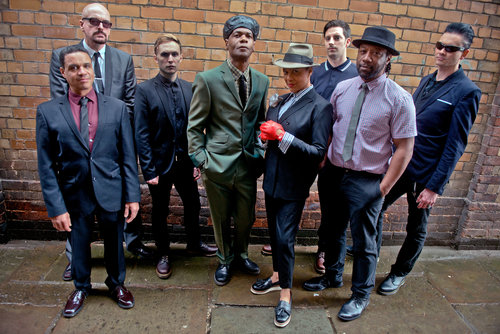 I settle down to write this review in a somewhat bleak frame of mind, at the end of a week when I marked my fifty-ninth birthday and found myself, as many of us do on these occasions, looking back at my life and wondering where the time’s gone and what, if anything, I have to show for it all. My sour mood hasn’t really been sweetened by various news items this week: a performing dog and its stunt double winning a television talent show seemed to receive more media attention than the continuing dismantling of the UK’s welfare state, while the same media seem suspiciously eager to minimise the effects of the continuing attack on society’s most vulnerable and marginalised people by a kleptocratic ruling class fixated on the ideology of neoliberalism. Elsewhere around the world, we continue to see brutal repression, state-sanctioned murder and xenophobic social and ethnic cleansing, from Palestine to Syria, Iraq to Yemen and, of course, within the EU. Add to all this the fact that today also happens to be the 800th anniversary of the origination of the political myth of Magna Carta and its equally mythical protection of ancient personal liberties and it’s no wonder I’m in such a grumpy mood.

At times like this, I often seek solace from my pessimism in music; sometimes it offers a welcome escape from the harsh realities of life, but sometimes it’s useful for confirmation bias, too. So the appearance of Subculture, the new record by those doyens of the ska revival, The Selecter, couldn’t be more timely in providing a heady mix of politics and social conscience, set to the irresistible syncopated off-beats that are such a hallmark of the sound, and guaranteed to raise the spirits of even the most curmudgeonly.

The upbeat opening track and lead single ‘Box Fresh’ certainly had me up and dancing from the start; its rapid-fire percussion and rocksteady guitar providing the ideal backdrop for lead singer Pauline Black’s lyrical tribute to Arthur ‘Gaps’ Hendrickson, her bandmate of the last thirty-six years. As Pauline says on the band’s website, “We’re like the Fred Astaire and Ginger Rogers of ska!” and, while she may not be doing everything backwards and in high heels, she certainly looks to be having a fine time in the accompanying video.

It’s followed by the more leisurely reggae-tinged ska of ‘It Never Worked Out’ in which Gaps muses on a love gone bad. The sadness of the lyrics are juxtaposed with a major-key chorus, accompanied by Pauline’s sweet harmonies wrapping around the melody like a reassuring hug from a dear friend. Meanwhile, the horn section doffs its collective pork pie hat to the legendary trombonist, Rico Rodriguez, with an arrangement that wouldn’t have been out of place on the early records of former 2 Tone labelmates The Specials.

One of the record’s standout tracks, ‘Breakdown’, is a stark and somber reminder of how entrenched racism still is within the police

‘Open Goal’ returns to the up-tempo ska rhythms, solid as a rock, with Pauline and Gaps trading verses in lyrics dealing with the politics of the personal, the disintegration of a relationship framed within football-related metaphors. The technique of allowing each side of the relationship to have their say in respective verses is a smart piece of writing and draws the two strands of the song together in a unified whole.

One of the record’s standout tracks, ‘Breakdown’, proves once again that, when it comes to sharp political commentary, The Selecter still have what it takes. Musically inspired as much by Jamaican reggae greats such as King Tubby and Augustus Pablo, as by the later UK ska revival classic ‘Ghost Town’ by The Specials, lyrically it’s a stark and sombre reminder of how entrenched racism still is within the police, primarily in the UK but also in America. The dubby coda finds Gaps reciting a roll call of some of the many Black men and women whose deaths seem inextricably linked to the extreme prejudice which too many law enforcement officers apparently think is their right. The list is only partial and yet is still far too long: Stephen Lawrence, Charlene Ellis and Letisha Shakespeare, Cherry Groce and Cynthia Jarrett, Joy Gardner, David Emmanuel (a.k.a. Smiley Culture), Azelle Rodney and Mark Duggan are just some of the UK names here, with Trayvon Martin, Michael Brown and Tamir Rice representing the USA. That such a huge number of Black people should suffer such brutal deaths at the hands of the police is unforgivable; the lack of accountability only makes matters incalculably worse.

‘Karma’ – another highlight of the album – keeps the focus on the social injustices of these modern times; specifically, the impact on everyday people of the rising tide of the viciously uncaring ideology enshrined in the neoliberal wet dream of pushing laissez-faire economic liberalism to its absolute limits. Which may be all well and good if you fall into the wealthiest demographic – whose wealth has doubled under the current regime – but it’s been done at the expense of the poor, the marginalised, the disabled, the sick and the dispossessed. Anyone, in short, who’s had the misfortune to fall between the cracks and to have landed, not in the safety net of the welfare state, but on the hard road of the rock bottom. The Selecter manage to capture this anger and channel it into the stories told in ‘Karma’, at the same time demonstrating their musical grasp of what makes a great reggae tune.

This understanding of the rich heritage of reggae music is also at the heart of ‘See Them A Come’, which drinks from the same musical well as UB40, with a splash of ska revival added for good measure. The result is a radio-friendly hit single in the making; it has the words ‘sunny summer day’ written through it like a stick of seaside rock and offers a musical sugar rush that will surely have you up and dancing before you know what’s hit you. 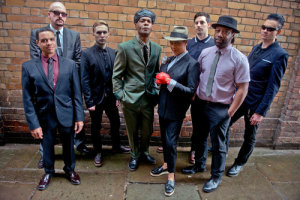 The choice of the Bruce Springsteen song ‘Because The Night’ (perhaps better known for Patti Smith’s version) is an interesting one. Covers have been a cornerstone of much reggae and ska music for a very long time; indeed, The Selecter’s own cover of The Pioneers’ timeless ‘Everyday (Time Hard)’ was one of the highlights of their 1980 debut album, Too Much Pressure. While it’s no surprise that the band would include a cover here, I was faintly surprised at the choice of ‘Because The Night’, mostly because it just hadn’t occurred to me that the song would take any arrangement other than one in a generic rock style. The Selecter promptly demolished my misconception with a powerfully atmospheric version which is sure to become a highlight of the band’s live shows.

The pace slows a little for ‘Stone Cold Sober’ with Gaps stepping up to the mic, while Pauline’s harmony vocals on the chorus are sublime. The horn section in the following ‘Walk The Walk’ is curiously reminiscent of The Specials’ ‘A Message To You, Rudy’ – this is categorically not a bad thing! – while Pauline’s lyrics send a message of positivity and affirmation in a rallying call about standing up for what you believe in.

”It’s not easy for women in general, particularly Black women, if you go against the grain of every damn thing there is but, nevertheless, still I rise!”

Political events in Gaza come under the microscope in the ska-powered ‘Babble On’ with its outspoken lyrics about the genocide of Palestinian people. Lee Horsley’s keyboards and Will Crewsdon’s blistering lead guitar break keep the whole thing moving at almost breakneck speed and, while some people may find the song’s pro-Palestinian stance unpalatable, many more will undoubtedly nod their heads in agreement. This has all the hallmarks of a classic Selecter tune: a driving ska rhythm, Pauline’s instantly recognisable voice and a strong message about injustice. A little closer to home, ‘Hit The Ground Running’ keeps the groove simmering with a sharply-observed dissection of the twin iniquities of zero hours contracts and the bedroom tax over a tight, stop-start rhythm and a cheerily delirious horn section.

The album draws to a close with ‘Still I Rise’, Pauline’s thoughtful tribute to the late Maya Angelou, the Black American author, poet and activist. Pauline met her only once but was still profoundly moved by her work; as she says in the PR notes, “It’s not easy for women in general, particularly Black women, if you go against the grain of the whole R&B tradition and things like that. I’ve always gone against the grain of every damn thing there is but, nevertheless, still I rise!” The song’s title is a direct reference to one of Dr Angelou’s most well-known and popular poems and Pauline’s lyrics reflect its central theme of transcending difficulty and discouragement. Musically, it showcases The Selecter’s unique blend of ska and reggae and rounds off the album in fine style.

Anyone who’s been keeping an eye on The Selecter in recent years can’t have failed to notice how smoothly the band has made the leap from the rough and ready DIY ethos of the late 1970s ska revival to the 24/7 digital world which we inhabit now. Subculture finds The Selecter continuing to make music with a message which is as relevant to our times as it was 35 years ago: a multicultural society has more to offer us all if we unite to fight our common enemies – particularly (but not exclusively) sexism and racism – rather than fighting each other over lines drawn in the sand by those who benefit from keeping us divided.

Image one, at the top of the page, is of Pauline Black. She leans against what looks like a corrugated iron garage door, one foot crossed over the over. Wearing a black suit, black and white checked gloves and a cream fedora tilted down over her eyes. Black looks directly at the camera, from beneath her hat. Image by Dean Chalkley, used with kind permission. Image two is a group shot of The Selecter, who pose in front of a brick wall, uniform in dapper suits. Image by Jules Annan, used with kind permission.