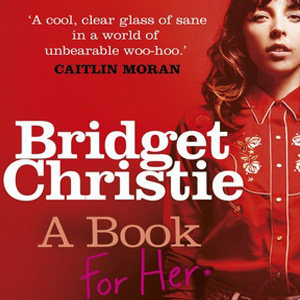 A Book For Her: ridiculing the sacred 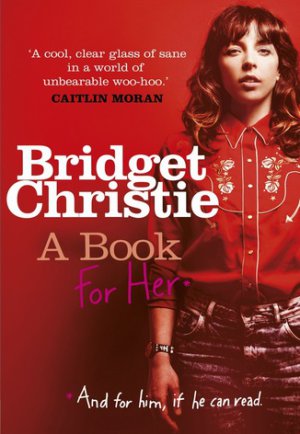 Early in A Book for Her, Bridget Christie points out the ridiculousness of critics who allege that feminism is a fully covered topic. After all, there are multitudes of books on every subject from philosophy to YA dystopian fiction — why would feminism be considered a fully covered and solved subject?

Most of the writers Christie is being compared with (Caitlin Moran, Naomi Wolf) write from an academic perspective or with the narrative flow of a columnist. Christie is first and foremost a comedian: A Book for Her, her first published work, is intended to be a funny read as well as a memoir examining what it means to be a female comedian attempting to find the humour in serious social issues. The book charts the development of Christie’s stand up career, from her early routines — in which she memorably describes dressing up as Charles II and an ant — to her recent award-winning show A Bic for Her which first garnered critical attention for her feminist comedy.

Her chapter on FGM, in which she passionately argues for the importance of art and comedy in raising awareness and understanding, is the heart of the book

A Book For Her is indeed funny, which one suspects is Christie’s most important goal in writing. However, beyond laughing out loud on the Tube at jokes about Michael Gove, the book is at its best when Christie mines the humour of her own life: a critic’s offhand assumption that she could only have been booked at the Edinburgh Festival because she slept with industry officials; attempting to vote in the local elections while staff complained about her child playing; and the photograph which inspired Christie’s personal passion for ending female genital mutilation (FGM).

Christie’s chapter on FGM, in which she passionately argues for the importance of art and comedy in raising awareness and understanding, is the heart of the book. She speaks of her collaborations with Leyla Hussein of Daughters of Eve and the film they made in order to laugh at the ridiculousness of the idea of FGM, noting that, “by laughing at FGM, you lower its status. If you mock something that is considered so important, and sacred, you take away its importance. You make it ridiculous.” It is a topic that is most often seen discussed as an afterthought on political shows or at feminist conferences, and Christie is eloquent in noting that an audience who comes to see one of her shows is a group of people she can interest and educate about the issue.

Comedy is a potential opportunity to challenge social and political structures, including those which oppress women

Christie argues there should be no subject off-limits in comedy, but it is important to be sure who the joke is aimed at — a joke mocking survivors of FGM is very different from sketches aimed at the ridiculousness of attempting to control women’s sexuality through vaginal disfigurement. It’s a dilemma which has occurred to many feminist comedy fans: how to explain why jokes mocking rape survivors can be painful, triggering and humiliating, while Katherine Ryan’s routines about rapists angrily trying to distance themselves from their crimes can feel empowering to a survivor in her audience. Comedy is a potential opportunity to challenge social and political structures, including those that oppress women, and this, as Christie notes, is a powerful tool.

It would be easy to criticise Christie for her lack of intersectionality as a feminist writer: the story of a fart in the Women’s Studies section of a bookshop, which she recounts as inspiring her book, can certainly be perceived as flippant, silly middle-class feminism (and is a bit of a jarring edge in her otherwise sharper, more political humour) but Christie uses this as an entry into a more thoughtful form of feminism. She is brutally, refreshingly honest about how she became interested in FGM — a haunting photograph reminded her of her young daughter and elicited a deep emotional response she may not have felt otherwise. And when asked to name her feminist hero, she thinks of Malala Yousafzai (although an editor requests she change it to Lena Dunham – they’ve already chosen an appropriate photo to fit).

Interestingly, A Book For Her can serve as an introduction to both feminism and comedy. For comedy fans, Christie includes an appendix of seminal feminist writing for anyone who has become impassioned by her book. For those interested in finding more feminist comedy, Christie is happy to signpost acts by female comedians she enjoys and those who write and perform expressly feminist material — a list including female comedians with diverse backgrounds and different takes on gender inequality.

She makes the point that, despite the argument that feminism has been ‘dealt with’ (she recounts one particular critic asking her what she would focus on in her next act now that feminism has been dispatched), feminist comedians consistently offer new routines on the absurdities of sexism in everyday life and across the world. Christie is able not only to entertain with her own written feminist comedy, but to make comedy more informative and feminism more accessible. And now she has convinced critics that feminism is ‘solved’, who knows what issues there are for her next book?

A Book For Her is published by Century and available to buy now.