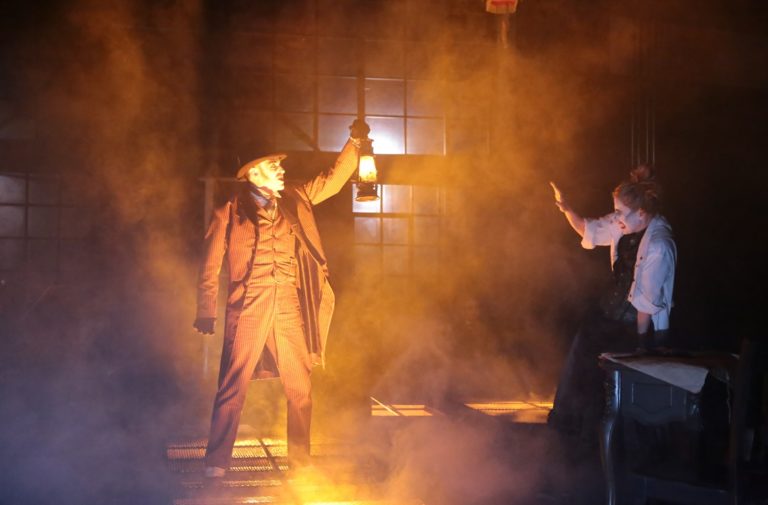 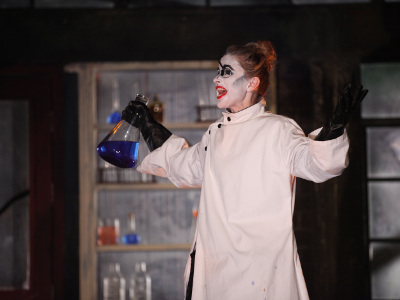 The eerie stage interpretation of Robert Louis Stevenson’s gothic novella The Curious Case of Jekyll and Hyde currently showing at The Platform Theatre is an excellent production but also raises troubling questions about gender identity and stereotypes.

In this version, reinterpreted for the stage by Jonathan Holloway, Dr Jekyll is no longer a male doctor in his fifties but instead is a female scientist, Dr Tajemnica Jekyll. Her menacing alter ego Hyde, on the other hand, is still a man. To explain why I felt this reinterpretation troubling, it’s best to refer to back to the original story, which I had read before seeing the play. It’s only ninety pages so I would recommend reading it first if you can – it’s a quick one.

To recap, The Curious Case of Jekyll and Hyde is set in Victorian London and follows the story of a Doctor Jekyll who is tormented by his past misdeeds (though in typical nineteenth century style, Stevenson is unclear on what exactly these misdeeds are). Despite his guilt he still yearns to misbehave. In order to purge his guilt and satisfy his lusts, he creates through the use of drugs a dangerous alter ego named Edward Hyde, with whom he can fulfil his darkest desires and keep his conscience clean. Inevitably this turns to the bad and he is unable to control Hyde, who eventually takes over his whole being. At the end of the novella Hyde kills himself, although it is unclear whether the motivation to do so was Hyde’s or Jekyll’s. This transformation and tragedy is eventually discovered by his friend, the lawyer Utterson.

This novella throws up many interesting questions Can we separate the good and evil in ourselves or should we accept our full and flawed personalities and past as they are? Is our evil side just as much our personality as our preferred better side? Can we really deny all moral responsibility for our actions if we knowingly take a drug that will turn us evil?

Although I feel sympathy for Jekyll, she displays some nasty behaviour when she is in her original female form

In Holloway’s stage interpretation there are three big points of difference that I think are worth pointing out. As already mentioned, Dr Jekyll is a woman while her alter ego, like the original Hyde, is a man. Secondly, Dr Jekyll’s explained motivations are very different from the original Jekyll. She has fled her home in Eastern Europe after being a victim of sexual violence and now yearns for the solace and protection that she believes being a man brings. Third, in the stage version, the lawyer Utterson is not a friend to Jekyll but rather her lover who is drawn into her world without initially knowing about her alter ego. This brings a sense of intimacy and subtleties to the characters, which the original Utterson and Jekyll relationship lacks. 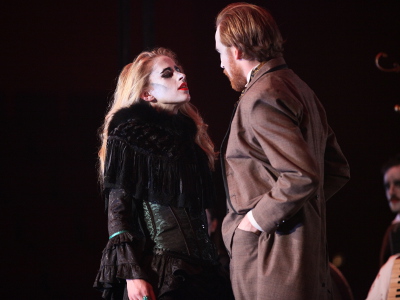 Considering Jekyll’s history and motivation, I can understand why her alter ego is a man. She is the victim of gendered sexual violence so feels protected by her alter ego, especially with the setting in Victorian times: it’s clear that men are considered strong while women are expected to be the fairer, weaker sex. Furthermore, as a woman she is the victim of casual sexism. For example, Utterson is surprised when he first meets her as he expects her, as a scientist, to be a man. Her attempt to take control of her life in a man’s world seems admirable.

However, that Mr Hyde not just a man but also a very evil man is troubling. Hyde attacks a child, rapes a woman, sexually abuses and attacks Utterson and commits murder. This all begs the question – is Holloway trying to say that a man would commit this kind of behaviour and Dr Jekyll, as a woman wouldn’t?

It’s probably not as clear cut as that. Although I feel sympathy for Jekyll, she displays some nasty behaviour when she is in her original female form. She mocks Polly (Utterson’s previous lover) in a horrible way, picking out her obvious poverty and cheap clothing. She also emotionally and sexually manipulates Utterson, persuading him to hide a dead body that she killed while in the persona of Hyde.

One could argue that these are her Hyde traits that are coming through in her without her will but, in the original novel, Jekyll does not display Hyde’s traits until he has physically transformed. Furthermore, there is the added detail that Tajemnica Jekyll is the victim of violence herself and, as a result of this, it is indicated that she is now drawn to destructive behaviour and self harm. 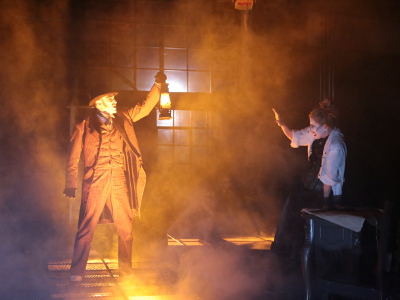 The fact that Jekyll displays cruelty in both her female and male forms brings to the fore that very perplexing question: can we really split our personalities into the good and the bad? At the end of the play, while under the influence of Hyde she regains consciousness as Jekyll for a moment and cries that she is the victim of humanity. This is heartbreaking. In trying to escape from her past and find protection she turns into a type of person she fears the most. She is unable to split or control her personalities because she is unable to escape her past.

Despite this, I still feel troubled that the original character was a woman and that her dangerous alter ego a man. Furthermore, even the types of cruelty she displays in her different personas conform to gender stereotypes. As Hyde she commits violent sexual acts, while as Jekyll she commits a more stereotypically feminine evil when she cruelly mocks another woman.

Bringing this element of gender identity to this story I think complicates it too much. However, I am still discussing this play: with friends, the van driver who helped me move house this week and baffled work colleagues. In some accompanying text to the play Holloway wrote that he intended to reimagine the story in order to encourage debate in contemporary audiences. He certainly did that.

Despite the moral muddles and troubling gender identity musings the play brought me to, I enjoyed it for the entertainment value. It’s bloody, energetic and the superb set and music make it an exhilarating performance.

Jekyll & Hyde is on at the Platform theatre until the 8 August. Tickets start at £12.50. If you cannot make it, there is a free performance installation piece by Jade Yung, recent MA graduate of Central Saint Martin’s, that is worth a look, made in response to the play and open from 6pm.

Images are used with permission and are property of Chung Ying Theatre Company.
Image 1: A woman stands facing the side, dressed in a white coat and black gloves and wearing white face paint with painted black eyes and red lips. She holds a flask filled with blue liquid. Her arms are outspread in triumph and exultation.
Image 2: The same woman is now dressed in black, with the same face make up; now her blonde hair is down. She is looking up at a bearded man – we can only see his back and side. His hands are in his pockets as he looks back at her.
Image 3 and the feature image: The stage is filled with dry ice. A man holds a gas lamp up; a woman shrinks from him, shielding her face with her hand.