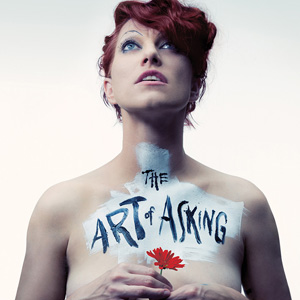 Plenty of art… but where’s the asking? 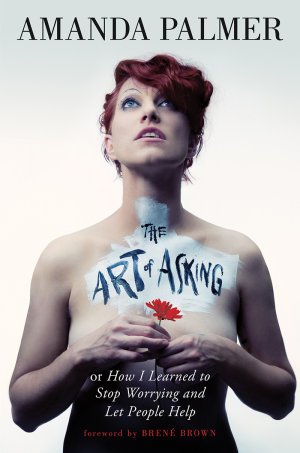 Amanda Palmer has many strings to her bow: performance artist, musician, blogger, Twitter provocateur and, most recently, author. The Art of Asking draws on all of Palmer’s roles and artistic experiences, bringing them together into something of a central manifesto: that success and happiness comes from asking for, and accepting, help.

Although The Art of Asking does have some strains of the self-help book, frequently offering emotional and psychological insights (“all of us come from some place of wanting to be seen, understood, accepted, connected. Every single one of us wants to be believed”) it reads more like a memoir. This is a very personal record of Palmer’s own journey through art and relationships, and the insights she provides always have a personal connection.

For anyone who knows Amanda Palmer’s work this shouldn’t come as a surprise. She is an artist known for baring herself (often literally) online, in interviews and in her art. This tendency to emotional response, to sharing the personal in (incredibly) public forums, is how she explains the reasoning behind one of her most controversial moments — the uploading of “A Poem for Dzhokhar” onto her blog in the wake of the Boston Bombings. As Palmer herself says, the distance between her “experience” and the art she creates is not great: everything in her final “art gazpacho” is recognisable. The personal and the professional are interchangeable in the case of Amanda Palmer. Palmer lives her art… and lives her asking.

It’s not difficult to see why Amanda Palmer can be such a polarising figure. Her openness and outspokenness have earned her legions of loyal fans, so many that she was famously able to leave her record label and successfully crowdfund an album. But, as with the controversy caused by the Dzhokhar poem, it equally inspires outpourings of vitriolic comments and condemnation. Palmer seems to be loved and hated in pretty equal measure.

It is a narrative of a life, and a person — a messy, complex, sometimes repetitive, sometimes insightful person

Although I don’t particularly come down on one side or the other when it comes to Palmer as a person, I certainly felt this polarising effect when reading The Art of Asking. I found myself alternating between finding it inspiring and irritating, between valuing Palmer’s intensely personal voice and wishing she would talk more about others’ experiences, problems and insights.

Because while Palmer’s book includes other narratives, drawn from discussions with friends, family and (inevitably) fellow Twitter users, they are not really drawn into the core “message” of the book, perhaps because they would complicate its argument.

That argument is, essentially, this: in order to be successful at asking, you need to “prepare the ground”, build a crowd through “connecting” and tend to those relationships “like a faithful farmer”. When help comes, we should always take it (or, as Palmer says, “take the fucking flower”).

I say “‘essentially”’ because this argument comes scattered throughout the book and is frequently reiterated in its component parts, sometimes in subtly different ways (“take the fucking donut”). As someone who spends much of her working life trying to impart the importance of a clearly reasoned and logically developed central thesis, this kind of writing would normally infuriate me. However, given that this is a book about Palmer’s own developing awareness of these imperatives, this structure actually kind of works. It is a narrative of a life, and a person — a messy, complex, sometimes repetitive, sometimes insightful person. There is also a rough chronological structure here, following Palmer’s artistic career from her Eight-Foot Bride days to the Dresden Dolls and as a label-free solo artist. This makes the psychological insights more understandable as they are, in
a way, a part of this narrative of increasing self-awareness: the building of Palmer’s personal credo.

This chronological aspect is built around a dilemma that Palmer was facing somewhat closer to the writing of the book itself (or at least to the TED talk that led to the book). Palmer was left “between cheques” prior to the launch of her crowdfunded campaign, and needed a “loan to bridge the gap for a few months” so that she could pay her staff. As she says, for an artist (or indeed anyone self-employed or working on temporary contracts) this “wasn’t an unfamiliar situation”, and she’d become an “expert at riding that line and asking for help”. However this time her husband, the writer Neil Gaiman, wanted to provide this loan and sent Palmer, used to being a financially independent woman, into a spiral of existential crises in which she heard the voices of imaginary critics condemning her for being a “bullshit narcissist with a rich husband”; “no fucking feminist” but rather a “hypocritical fraud who falls back on the patriarchy”.

This inner monologue — at once funny and horribly recognisable with its evocation of the “fraud police” that probably haunt us all in one way or another — recurs throughout the book, providing an ongoing “flash forward” between Palmer’s recollections of her career. It brings the threads of the book together and is the place where Palmer incorporates what she has learned about herself and about asking. And this is where things become problematic.

The subtitle of the book is “How I Learned to Stop Worrying and Let People Help” and this is in fact what this central thread of the book is all about. Not asking at all but “letting people help”. Palmer had trouble letting her husband help her so she urges us to “take the fucking flowers” when they are offered. And while this may well be pertinent advice — her inclusion of the story of Yana, one of her fans, is testament to the fact that doing so can sometimes change (and save) a life — it is still not advice about asking.

Palmer does certainly touch on asking elsewhere. Her advice about tending to relationships and building the metaphorical “‘crowd”’ from which to “‘fund”’ makes clear that this is how successful asking happens. However I wonder what Palmer would say about those who are struggling to build a crowd. How, outside of the context of rock stars and performance artists, can we forge those necessary relationships? What would she advise for those whose crowds might simply not have the means to answer the ask, or the desire to help?

Palmer misses the mark on the big questions around asking, not least for women

The book starts to offer an answer of sorts in the inclusion of a story told to illustrate Palmer’s musing on the difference between “asking” and “begging”. Asking one of her “distant European relatives”, Duncan, about it, he tells her about his mother’s estrangement from her sister, even throughout a long battle with cancer. When he finally calls his aunt himself to ask her to reconcile before her sister’s death she refuses. He states: “I never ask anyone for anything. And I’d finally asked […] That answer, Amanda… it crushed me”.

This story had the potential to be one of the most interesting parts of the book yet it is left uncommented on by Palmer. The section ends where the above quotation does and the book launches into a different narrative of Amanda Palmer’s discovery of Twitter. I was left feeling unclear about where Palmer stood on this issue of asking and begging — was Duncan, in Palmer’s view, unsuccessful because he was in fact not asking, but begging? Should we then only ask when the outcome is not important to us? What do we do when what we need is not people to buy our art but people to love us, to feed us, to clothe us, to save our life?

I’m not of course suggesting that Palmer attempt to solve all such social ills and answer these questions definitively. Indeed, there is a strong argument to be made that no one should have to “ask” for these fundamental things since that is what social welfare is for. But I do feel that Palmer misses the mark on the big questions around asking, not least for women.

Palmer writes that when she moved from playing solo to being a part of The Dresden Dolls she felt both her asking and her art became more legitimate — she was more comfortable asking from within a collective. She notes that this is not an isolated personal phenomenon and that research studies have shown that, in job interviews, women in particular find it easier to negotiate on behalf of someone else rather than for themselves. Women — but not men — are concerned about damaging their reputations if they ask for more money and, she notes, further research has shown that both male and female managers are less likely to want to work with women who negotiate in job interviews. Palmer includes this information but does not develop it. Rather, she buries it within a story of a friend who has been offered gigs but is concerned she is not good enough to warrant the pay. An opportunity for Palmer to address how women can respond to these issues of social conditioning and gendered assumptions — or even to present how she herself, if faced with this dilemma, would have responded — is lost. Instead we are left with another imperative to receive, to “take the fucking donuts”.

The Art of Asking certainly has its flaws; not least the fact that it’s not got a whole lot to do with asking. Rather, it has a lot to do with art — Amanda Palmer’s art — and a lot to do with giving, and taking. Palmer’s personal voice is strong but the foregrounding of her battle to “stop worrying and let people help” overwhelms the argument, meaning that key questions and ideas get lost in the fragmented narrative.

That being said, this is an enjoyable read. It offers an insight into the back-story and inner thoughts of a controversial public figure. Like everything Palmer does it is emotional and somewhat spontaneous — reading it, you get the sense of something like a stream of consciousness. Palmer does not shy away from her own inconsistencies in this book — she is at once outgoing and insecure, confident and beset by imposter syndrome. And in a world where women are still constantly asked to fit into one neat category (career woman; stay-at-home-mum; mouthy performer; girly girl…) and are met with incredulity and condemnation if they don’t, or if they happen to fit the “wrong” one, just showcasing that complex identity, as Palmer does throughout The Art of Asking, may well have the potential to inspire.

I just wish it had a bit more discussion of asking.

The Art of Asking: How I Learned To Stop Worrying And Let People Help is available now, published by Piatkus.