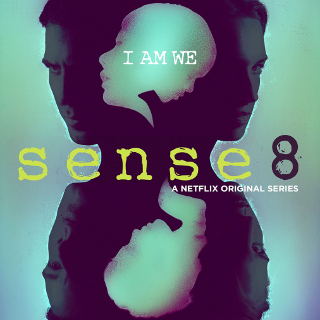 Authenticity in a sci-fi world

Netflix’s Sense8 is an awesome piece of science fiction drama. With gorgeous visuals and terrific action sequences, highly varied use of music and an international production that frequently crosses time zones within the same scene, it feels like something special from the very beginning. However, it is the writing by Lana and Andy Wachowski, along with Babylon 5 creator J. Michael Straczynski that really does magical things. It also provides a compelling story, eight uniquely appealing characters and a fairly revolutionary representation of sex and sexuality.

Sense8 follows eight strangers, spread (somewhat unevenly) around the world, who suddenly find themselves able to share one another’s experiences and communicate through their thoughts and feelings. The sensates begin to use their respective skills to help one another in various crises, as well as trying to avoid the sinister political forces that seek to destroy them.

There’s a prominent lesbian couple who seem more like authentic lesbians, rather than regular screen lesbians. They’re extraordinarily and conventionally beautiful, of course (everyone is here), but go against the usual Hollywood template, insomuch as they consist of a nerdy white transgender blogger and sensate (Nomi, played by Jamie Clayton) and a black costume designer with a buzz cut and multi-coloured dreads (Amanita, played by Freema Agyeman, Doctor Who’s Martha Jones).

Also, unlike a lot of screen same-sex couples, Nomi and Amanita don’t exist in isolation of other queer folk; as the series begins, they are attending San Francisco Pride. They have queer friends who look like they could be anyone’s queer peers or friends, and who discuss Pride as a powerful personal and political event, rather than the light-hearted rainbow party it is so often portrayed. We’re used to queer couples like Tara and Willow in Buffy The Vampire Slayer or Caroline and Kate in Last Tango In Halifax, who have no lesbian friends. Piper Chapman and Alex Voss from Orange Is The New Black know a few other lesbians by virtue of sharing a prison with them, but are so drastically alienated from queer culture that nobody in Piper’s life has ever heard the word “bisexual”. I believe this is the first time I have ever seen a prominent trans character, played by a trans actor, whose transgender status is far less important than her romantic relationship, technological expertise and adventure she’s on. There’s no big reveal; it’s just backstory.

In contrast with Nomi and Amanita’s life as part of a supportive LGBTQ community, Lito and Hernando (Miguel Ángel Silvestre and Alfonso Herrera), a gay couple in Mexico city, have to conceal their relationship in order to protect Lito’s career as screen heartthrob and lead actor in action movies. However, this is also a very positive relationship where, despite inevitable tensions, the lovers make each other laugh and smile much of the time; this is not the tortured passion of so many closeted gay relationships on screen.

Sense8 features a group of young, thin, mostly white, conventionally attractive people without physical impairments, in romantic and sexual situations – this is nothing new in American-made TV shows. However, the way sexuality is handled is varied and dynamic and thus far more realistic – despite the science fiction themes and psychic sexual activity – than viewers might be used to.

There are, for example, explicit scenes of nudity and sex, but bodies are filmed very beautifully and not for titillation – the sex isn’t typical screen sex where at least one pair of breasts must be in full view at all times; people make love like real people do, with broad variation. Despite quite a lot of sex, probably one of the most memorable scenes of nudity is the stunning overhead view of Wolfgang (Max Riemelt) as he swims naked.

In one remarkable scene, the several sensates become entangled in one another’s love-making, in what effectively turns into group sex. The action begins with the two same-sex couples, centring same-sex desire and affecting three male characters who are ostensibly straight, according to TV’s usual heteronormative standards – Will (Brian J, Smith), an American police officer, Wolfgang, a German thief and Capheus (Aml Ameen), a Kenyan bus driver.

Will is by far the most stereotypical character: a white Chicago cop with a troubled past, trying to live up to his father’s reputation, defying his bosses to follow his hunches. He’s a character we’ve seen in hundreds of film and TV shows. He’s attracted to Icelandic DJ, Riley (Tuppence Middleton), but while lifting weights, he becomes caught up in Lito and Hernando’s love-making and swept away by the scene to the point of orgasm. The other two men are less affected; Wolfgang, preoccupied by his desire for Kala (Tina Desai), remains indifferent and detached while Capheus is merely baffled when he has an erection during a Jean-Claude Van Damme movie.

Too often, masculine sexualities are seen as rigid, with male heterosexuality requiring a dash of homophobic angst, often played for giggles

None of these men respond with disgust or amusement to what’s happening among the sensates. Too often in popular culture, women’s sexuality is seen as infinitely flexible, while masculine sexualities are seen as rigid, with male heterosexuality requiring a dash of homophobic angst, often played for giggles. This scene doesn’t reverse this trend, but it does demonstrate variety and ambiguity in masculine sexuality. The apparently straight women simply don’t happen to be involved.

Indian scientist Kala’s lack of sexual experience is treated with similar respect. This is strongly implied, but treated neither as an impairment nor a special prize. It doesn’t make her a naïve, silly or easily scandalised character. In the same way that she is allowed to be both a scientist and religious Hindu, Kala is allowed to be a sexual adult without sexual experience.

Levels of violence in Sense8 escalate over the course of the season, becoming graphic and extreme but, in keeping with the Wachowskis’ style, violent scenes are always fast-moving. I’d issue a content note for medical abuse and there are strong references to domestic violence and violent childhood bullying. However, in a show that includes explicit sex and graphic violence, Sense8 is notable for the absence of sexual violence or the threat of it. There is only one short scene of sexual intimidation, when a prison doctor asks Sun (Bae Doona) questions about her sexual history, in parallel with a TV interviewer asking similarly intrusive questions to closeted screen heartthrob Lito.

Sense8 addresses gendered violence, but risks presenting it as a very local problem within such a global production

When a show achieves so much in some areas of representation, its weaknesses become conspicuous. There is the usual Hollywood abundance of dead mothers: only three sensates have living mothers, while there’s just one explicitly absent father. While almost everyone has particular skills and expertise to help others escape danger, the men’s skills are mainly physical and the women’s are chronically underused. (At the end of the season Riley’s talents are yet to be used at all.) Also, while all the sensates have very strange and shocking experiences, there are three dramatic fainting scenes and they all belong to women.

The characters of colour on the show are not tokens, plot devices or back-up for the white characters, as they so often are on TV. However, race could be handled better; along with their universal gorgeousness, four out of the eight sensates are Caucasian, while the two white US Americans dominate screen time. In common with many East Asian women on our screens, Sun, a South Korean businesswoman, happens to be an expert martial artist in her spare time. Kala, in India, is about to marry a man she doesn’t love, although this cliché is somewhat subverted by the fact that her family believe she loves her fiancé and her fiancé is an attractive and charming man; this is not a forced or even arranged marriage, just one that’s not quite right.

Sense8 addresses gendered violence, but risks presenting it as a very local problem within such a global production. Daniela’s ex-boyfriend Joaquin (Raúl Méndez) responds to complaints about his violence with, “This is Mexico. I’m a man, I was raised that way. You hit your woman to make her respect you.” As South Korean prisoners relate histories of abuse at the hands of men and the crimes they committed to escape them, one declares, “In this country, sometimes the only place you can find a brave and honest woman is in prison.” As these problems are not unique to these countries, nor universal within them, this selective criticism strikes me as problematic.

Despite these issues, Sense8 does provide more racially and culturally diverse characters than the vast majority of TV shows. I’ve watched it during a free months’ trial with Netflix, along with various other shows my friends have been excited about, and it knocks everything else out of the water in terms of sheer ambition, the quality of the writing and its radically progressive representation of human sexuality.

Netflix Promotional poster for season one of Sense8. This shows a vertical figure of eight comprised of dark blue/purple, partial, unclear headshots of four of the characters, against a light blue background. There are two blurred white shapes where the circular gaps in the eight would be. These each appear to be two fused side profiles formed into a curiously shaped outline that looks similar to a foetus.