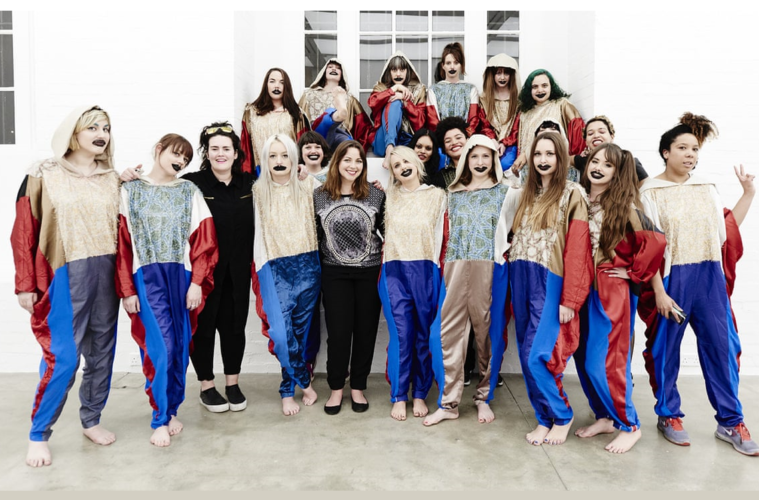 Not quite a chorus of approval

Part of the Almeida Greeks Festival, which includes talks, workshops and one off events, Gaggle: Lysistrata was performed in the North London venue on two nights after the main show. For the opening night, the atmosphere in the foyer of the Almeida Theatre was charged with excited anticipation, with the auditorium packed. The performance that followed was high in energy and earnest in tone, attempting to bring a modern twist and interpretation to an old story. Writer and director Deborah Coughlin’s version of Aristophanes’ Lysistrata has been updated and reinterpreted for a contemporary audience.

After an introductory song from all-female ensemble Gaggle, the story begins with a scene in a spa that introduces the four characters: Miriam, a young mother played by Jamie-Rose Monk, Lauren La Rocque’s chatty, loud Lampy, Katy Menczer’s Callie, an alcoholic and bitter writer, and Charlotte Church making her acting debut as Hannah, an MP. Initially an unlikely political ensemble, the contrasts in each character’s background, class and educational achievements come out during their initial conversation as well as in subsequent scenes, providing points of connection as well as disagreement between the women that challenge their ideas of themselves and of society.

With MP Hannah as their figurehead, they decide to go on a sex strike and form the Vigilantes of Justice to protest against war, male dominance and injustice. One of the most often repeated themes in the piece, alongside war and money, is consent, with each character coming to her own realisation that consent, particularly related to sexual contact, is vital for the future of a healthy society. The piece also questions ideas of conformity and acquiescence: writer Callie states that she has never done what she was “meant to do” and consequently feels like a failure, making her involvement in the women’s campaign a matter of burgeoning confidence as well as conviction. Meanwhile Hannah is unable to maintain her sex-strike, threatening the solidarity of the women.

The staging is simple, with the centre of the main playing area the focus for scenes and action while the back wall of the auditorium is used for video projection. The video clips that punctuate the action are spoof news reports mixed with archive footage of various protests and include pastiches of popular culture, talking heads, interviews and a ticker tape of rolling news that becomes increasingly surreal and absurd. The playfulness of this element of the piece is well judged and used both to cover scene changes and to move elements of the story forward.

It is hard to tell if the scene transitions are intentionally slow or under-rehearsed. There are problems with pacing in the dialogue too. While the three sections of the show are repeated and very clearly delineated – moving from singing into a scene followed by a video clip – the story moves sideways at times rather than forward and the energy and focus of the acted scenes doesn’t match that of Gaggle’s interludes.

Having said that, the colloquialisms and humour of the piece certainly engage and amuse the audience. The sense of mischievousness in the filmed and acted sections extend to the design – including a headdress intended to look like a vulva (complete with pom-pom clitoris) and the numerous costumes and facial hair used to represent and mock media and political personalities and the general public. These impersonations are often of men, but do include a spoof feminist commentator called Gertrude Whine whose rant about the patriarchy, presumably intended to be a pastiche, produced a spontaneous round of applause from the audience. The eagerness of the audience to engage in and be challenged by the onstage action is never properly rewarded, with a sometimes confused piece that doesn’t seem sure if the story can stand without jokes.

Gaggle’s presence in this version of Lysistrata serves to both comment on and frame the action of the play. Thirteen singers, barefoot and dressed in colourful onesies reminiscent of superhero outfits, are joined on stage by a percussionist. They sing and move mostly in unison, for the most part giving an earnest and solemn performance. Gaggle face out directly to the audience, their chorus-like role as part of the action of the scenes making their repetitive songs and chants both an underscore and a commentary on the action and context of the piece. At times it’s not clear quite where they fit in with the gentle humour of the dialogue and the overt silliness of the video clips, and their serious demeanour, spare musical arrangements and persistent volume slow the pace of the evening.

Overall, this new version of Lysistrata is bold and confident but at times incoherent. It is however topical, satirical and political with moments of visual and verbal silliness that kept the mood light and the audience engaged.

The Almeida Greeks season continues: a new version of Euripides’ Bakkhai by Anne Carson is running until 19 September and Robert Icke’s adaptation of the Oresteia is soon to transfer to the Trafalgar Studios.

The photograph used is by Sylvain Deleu and is used with permission. It shows Gaggle – a group of about 20 women wearing colourful clothes, some with black, exaggerated lipstick. They face the camera, posing for the photograph.

Naomi Paxton is a performer and researcher