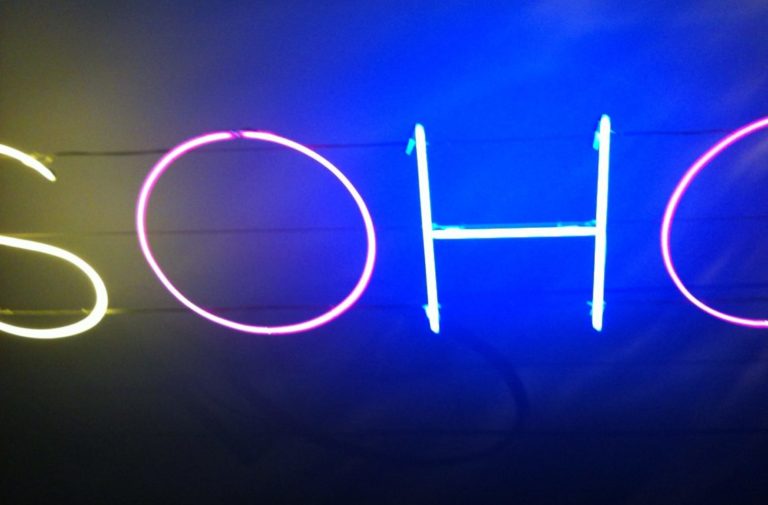 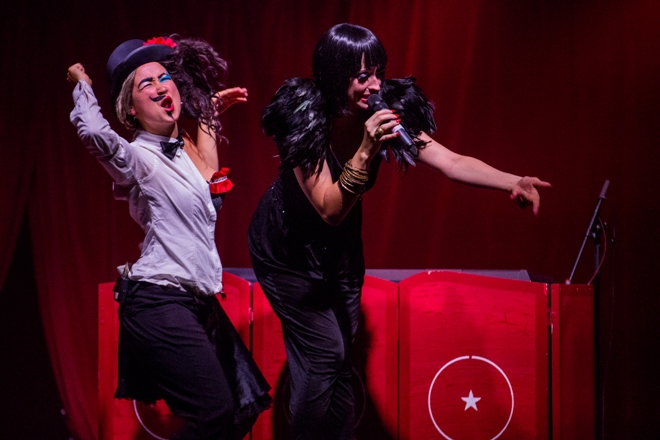 I wouldn’t ordinarily be in a hurry to see a show called Perverts. Particularly not on my own, on a school night, in a dimly-lit basement in Soho. But when East End Cabaret are in town, you don’t let embarrassment stand in your way. While the name might suggest sticky-floored venues and a higher than average chance of being arrested, the amazing duo behind East End Cabaret guarantee a night of full-bellied laughter.

Bernie (Victoria Byrne) and Victy (Victoria Falconer-Pritchard) are back from their latest tour down under, thrilling London audiences with a mixture of flirtatious and filthy cabaret material. With five years of practice together, and a mix of musical and emotional harmony between them, East End Cabaret are a confident, compelling collective.

The visual contrast between Victy and Bernie is a delight. Bernie is an old-school cabaret chanteuse, two parts noirish glamour to one part otherworldly magic. Dressed in dark sequins and feathers, like a black swan that’s got lost in a dressing-up box, she can’t help but hold the audience captive. Victy, by contrast, is her half-man, half-woman, all-awkward sidekick. Victor-Victoria, to give her full name, is split down the middle between bustier-bursting broad and straight-laced male. The contrast between her eyebrows alone is a world of comedy, her twitching half-moustache a source of mirth. Falconer-Pritchard has a glorious line in physical comedy, managing to play her role with a glorious and giddy ghoulishness. Her unrequited love for Bernie plays out in her every movement, by turns lumbering and skittish, and in every song. 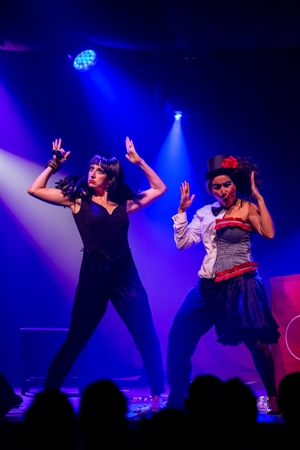 Unreturned affection must be the oldest love story in the book, but Byrne and Falconer-Pritchard nicely queer the script. Their relationship is more than an intense women’s friendship but it falls short of homoerotic, with Bernie blasting her sexual attentions at every dude in the room barring Victy. If cabaret is generally a world of male gazes and hetero longing, it’s refreshing that here men seem to serve mostly as pantomime horses and pack mules, literally carrying Bernie through her set. In a boldly brilliant touch, men take the backseat even in Bernie’s romantic affairs. The silliness and sadness of sex come through in some high comic scenes (the image of a buttoned-up estate agent air-fucking will not leave my mind) and what we are left with is the love between Bernie and Victy. Bi-gendered Victy isn’t exactly a detailed portrait in the politics of transgender embodiment, but in her hermaphroditic aesthetic she’s got something to say about the politics of sex, love and friendship.

Watching stand-up, or anything with a whiff of audience participation to it, can be a vaguely stressful experience. There’s the pressure to laugh loudly so that the performance doesn’t tank, or to play your part well if called upon to contribute. Not so with these guys. Bernie and Victy are the real deal, assured, assertive and acerbic in just the right ratio, guiding the show firmly throughout so we can all relax into a good hour of gawping and giggling.

In a weaker comedy set you start to see the fault lines: the spots in the improv where a previously used banker joke has been thrown in to save an ailing storyline, or when a call for audience contribution has fallen flat, but Perverts is seamless. Admittedly the audience aren’t required to contribute much, but Byrne and Falconer-Pritchard are both dab hands at milking the awkwardness of others for its comic potential. It’s a testament to their easy repartee and infectious enthusiasm that Victy and Bernie can entice an unsuspecting man onstage every night, luring him into their ribald set before extracting some painfully funny performances out of him. Bernie and Victy may be the stars of the show, but the hapless pelvic-thrusting men of London deserve a gold star for effort.

This is cabaret after all, darling, not a two-actor play

Perverts teeters between plot progression and miscellany. On the one hand, there’s the backstory in which Victy’s longing for Bernie progresses throughout the show, generating real comic heat. On the other, the songs seem to skip around between surreal, silly and salacious topics with only a slight narrative arc to support them. Treats like the emoji sex-face song, or ‘Is It In Yet?’ don’t need much anchoring, and this is cabaret after all, darling, not a two-actor play. But if you came here looking for a logical exposition of Bernie and Victy’s love story, you’d not be in luck. As a ribald, raucous ride through the dangers of deflowering virgins, the possibility of ‘Accidental Anal’ or getting ‘one boob stuck in the fridge’, however, Perverts hits the spot.

Perverts, East End Cabaret was at the Soho Theatre in London from 4 to 15 August. They will be at the Edinburgh Fringe on 28 and 29 August.

The feature image is of a neon sign saying “SOHO” and is by Lindsey Berthoud on Flickr.

Image 1 is of the same two women on stage. Bernie is in the centre of the picture and is holding a microphone to her mouth and reaching out. Victy is on the left and is dancing.