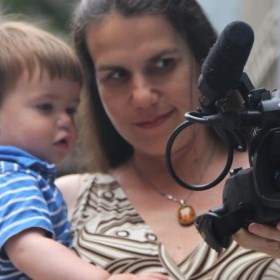 Sophie Mayer introduces Raising Films, a campaign to bring diversity and sustainability into the film industry by organising parents and carers, currently crowdfunding to recruit a project manager

According to the UK Equality and Human Rights Commission, approximately 54,000 new mothers are losing their jobs every year, and one in five pregnant women and mothers returning to work are harassed. What’s true across all industries is doubly true in the film industry, where most people work on short-term contracts with irregular and demanding hours, and where sexism towards all women remains rife. Despite this, the BBC has just cut funding for Media Parents, a scheme for parents returning to media work.

That’s why we started Raising Films: to press for diversity and sustainability by organizing parents and carers in the film industry. We believe that the lack of support for family life – for parents and kinship carers of all genders – within the industry is a barrier that disproportionately affects women, and exponentially affects women of colour, working class women, migrant women and queer people who may lack family support network and/or economic resources. Anyone working in the industry can tell us their story (email us [email protected]) and anyone can become a member.

As Romola Garai points out in our interview with her, attitudes towards parenting and caring are part of a larger system of “gender politics and the policed conformity of gender”. “Becoming a parent,” she notes, “obviously makes you particularly concerned for the needs of children and the effect that the media’s entrenched misogyny has on girls and boys. And, particularly, how the insistence on heteronormative gender behaviour and appearance pervades.” This includes the perception that women are incapable of working in film because they might get pregnant or be mothers, and then be uncompetitive in the industry because we’re caring, affective, sympathetic, multi-tasking, distracted and other traits problematically associated with normative femininity. 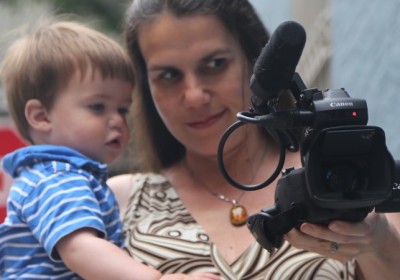 Alexandra Hidalgo, editor of feminist film site agnes films, argues that such traits are perpetuated by mainstream narrative cinema. “Those of us who are mothers,” she says, “might want to try to develop our children’s palate to consume not only big-studio production films geared toward them, but also smaller, more personal stories like the ones many of us are making.” That connection between reinventing film and rethinking work-life balance produces acclaimed films. Academy Award winner Susanne Bier told us: “There’s an element of reality-check that you’re forced to have when you have kids, which is very helpful in terms of storytelling… you embrace limitations in fun ways.”

Parenting can be part of a thriving film career: from Canadian director Marie-Hélène Cousineau finding that working within an Inuit community meant “children were always a part of the work environment”, even when filming on the ice, to British director Debbie Isitt affirming that “the best work is created on sets with a family atmosphere,” not least as this may lead to baby hugs from Meryl Streep! There are also creative approaches to the frustrations caused by industry demands, from Tally Abecassis’ podcast First Day Back about getting back into documentary-making as a mother to Jeanie Finlay’s recommendation that we all move to Nottingham, a family and film-friendly town.

Suggestions for making change include actor Alexis Zegerman’s post calling on people in the arts to get involved in the struggle for local council childcare. Taking her cue a little from Jonathan Swift’s satirical baby-eating manifesto A Modest Proposal, Sarah Solemani boldly states: “women must be encouraged to mother their children less… Until she can have a full night’s rest, and leave home without fretting over her inadequate substitutes… There Will Be No Change.”

There will be change: Raising Films is going to make it happen. But we need your help. The founding collective is made up of parents working in the film industry (and me: a childfree feminist academic along for the ride), and we know that both the problem and the solution are bigger than we can manage. So we are creating a job for a Project Manager who knows about research, about social media, and about campaigning: we want to pay fairly, and offer flexible hours. Following in the footsteps of many feminist filmmakers, we are crowdfunding throughout August, not to make one film, but to make more films possible.

Our top perk (because who needs another sticker/t-shirt/download) is The Functional Family (second top is The Lie-In), which may just result from allowing more people to do the jobs they love. As screenwriter Gabriel Bier Gislason, who spent time on sets with his mum Susanne, notes: “A good parent is a happy parent, and a happy parent is a parent that does what he or she wants.” Or in the words of writer-director Hope Dickson Leach, the project’s co-founder: “More babies at Cannes! I cry. A Palme d’Bébé!” Raising films in style.

The picture is by Aidan Tyson, courtesy of Raising Films. It shows a woman with long dark hair, wearing a patterned summer dress, holding a young child, probably a boy, in a striped blue top, on her right arm while balancing a small video camera with her left hand, as if teaching the kid how to use it.