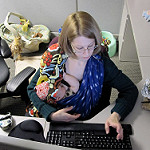 Support for breastfeeding mums in the workplace

Becky Young describes the difference it has made to her life having an employer who is supportive to breastfeeding mums, and thinks more employers should be adopting similar practices.

As for a lot of working mothers, the issue of juggling work and family life is always on my mind. Even though I’m lucky to have amazing support from my husband and familylife at times can be a bit of a balancing act. I have three beautiful children, my two daughters are at school and nursery school and the latest addition to the family is baby Reuben.

When Reuben was born, I was keen to breastfeed as long as I could but there was the issue of how I could do that and go back to work. I decided to speak to my boss, Karen James, a mother of three and grandmother of five. I was so happy when she not only agreed for me to bring my baby son into the office but also agreed to allow me to breastfeed at my desk! Karen started her own business after many years working in a male, corporate environment. She was keen to create a non-corporate atmosphere to allow flexibility to her staff. From flexible working hours to bringing your dog into the office, my workplace and my boss are quite unique. Which is wonderful for all of us but is, in itself, a sad statement to make. 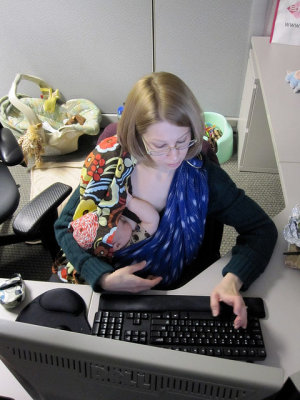 Wouldn’t it be great if this was the norm? Employers should realise that they will benefit greatly from having happier and more productive employees. They will also find the retention of their valued staff will increase so they needn’t worry about having to replace highly skilled individuals. Staff will not be tempted to go after other roles for the sake of monetary or additional benefits as flexibility and understanding in the workplace are priceless.
You may remember the whole question of breastfeeding in public had a recent airing in the press after a certain well known hotel asked a breastfeeding mother to cover up with a napkin when she started feeding her baby during afternoon tea. The Equality Act 2010 has made it illegal for anyone to ask a breastfeeding woman to leave a public place. Mothers should not be made to feel awkward for simply feeding their child. Neither should they be trapped inside their homes or exiled to the loos or any other unsuitable location. If people don’t want to see a woman breastfeed then they shouldn’t look.

Statistics show more mums are opting to breastfeed but few stick to it. So although breastfeeding at birth in the UK has risen from 62% in 1990 to 81% in 2010 (most recent figures from the last survey done by the National Childbirth Trust in 2010, published in November 2012)), an NHS report from June 2015 suggests that only 57% of mums are breastfeeding at 6 weeks and there is a further drop to 34% at 6 months, compared to Norway where 80% of mums are still breastfeeding after 6 months.

Evidence shows that 80% of mums decide to stop breastfeeding because of a lack of support. As I write this, support services for new mums are being cut across England. Prominent experts advise that increasing numbers of women will miss out on breastfeeding advice during their first year of parenthood.

This makes it even more crucial that breastfeeding new mums have the support of their friends and families in addition to the understanding and flexibility of their employers. The World Health Organisation recommends exclusive breastfeeding for 6 months so it would be great if women had the freedom to make the choice.In today’s economy, if you earn an average wage, it takes two salaries to meet monthly outgoings. So for most people there is no choice other than to be a working mum.

Not supporting a breastfeeding employee by allowing them to breastfeed or express milk in the workplace could be seen as discriminatory against working mothers. What option does she have? If she can’t afford not to work and doesn’t have the support of her employer, the only alternative she has is to stop breastfeeding and lose that connection with her child. If your income is low then your baby may have to miss out.

Breastfeeding is simply feeding your child. It’s a pity this most basic human need should have become such a complex issue.