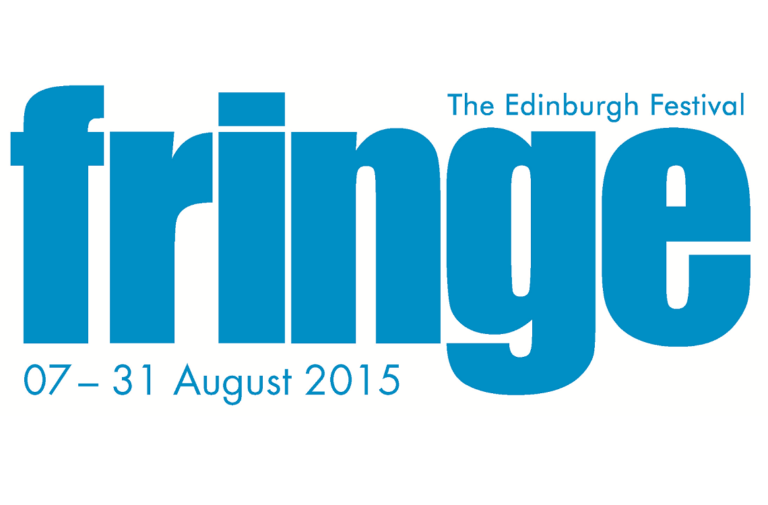 I began my trip to Edinburgh this year watching a recording of the Kaye Adams BBC Radio Scotland show. As a guest they had Tiffany Stevenson, who told the following joke, that I may be paraphrasing, written for the comedy night at the recent Red Lines Festival: How many people does it take to change a lightbulb? 35 women and one man; if by “change” you mean “get someone to listen to you” and if by “a lightbulb” you mean “speak about Bill Cosby’s sexual assaults”. This was a reference to how the allegations about Cosby were only finally reported in the press once a male comedian, Hannibal Buress, included them as part of his set. She made the point that comedy can shine a light on corners of the world that we don’t usually talk about.

So with that in mind, here’s the first part of the F Word’s Edinburgh comedy round up! 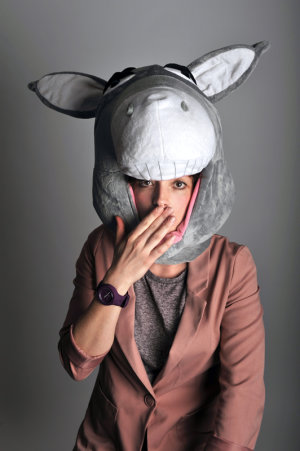 Along with the Foster’s Edinburgh Comedy Award judges and, it seemed, the world, I really loved Christie’s 2013 show A Bic For Her. I didn’t love her 2014 show, An Ungrateful Woman, quite as much, it didn’t seem to have as much material in. I’m really pleased to say though that A Book For Her is as good, if not better, than A Bic For Her.

As well as feminism, Christie keeps it intersectional with jokes about classism, racism and politics; taking in trans women (and trans-exclusive radical feminists), VAT on sanitary products and how boring it is deciding on which taps to buy along the way. She is really very funny, and has the quality that I most admire in a stand-up: the ability to make the non-obvious joke or take a theme in a direction that you never expected; when you’re essentially preaching to the converted with a left-wing stand-up routine this is especially important.

I’ve also got a brand-new useful definition of a feminist: we hate men, collectively and individually. (LL) 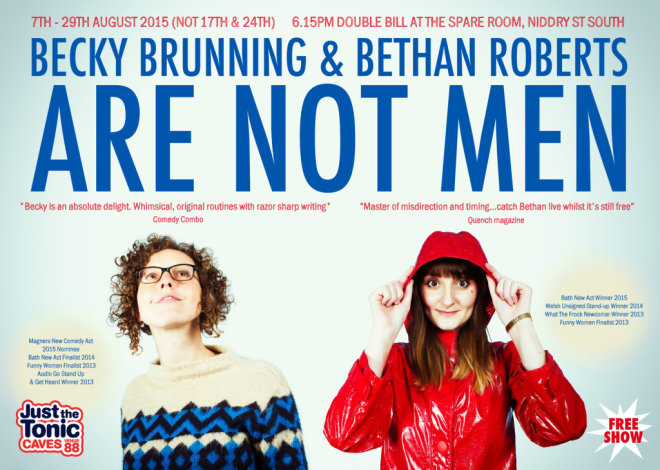 Becky Brunning and Bethan Roberts Are Not Men
Until 30 August, 18:15, Just the Tonic at the Caves

Brunning and Roberts have split this Edinburgh hour between them, which is an excellent way to put on a show if you’re not quite sure that you’ve got enough money, material or sheer bloody doggedness to fill a room for a month on your own.

Brunning took to the stage first, and ran us through her plus and minus points as an individual, asking us as the audience to let her know if she was cool or uncool (alternatively known as “hot”.) She had a nice line in slightly surreal humour, and I liked her joke about how the hardest thing about being a woman in comedy was that it didn’t leave you with enough time to do the ironing a lot.

Roberts had a warm presence on stage, and her list of the terrible jobs she’d done and a suggested comedy routine from her mum were highlights. I enjoyed her take-it-or-leave-it manner, and I’m always going to enjoy seeing a woman on stage speaking casually about sex and relationships.

This was a good-humoured solid hour from two stand-ups. (LL) 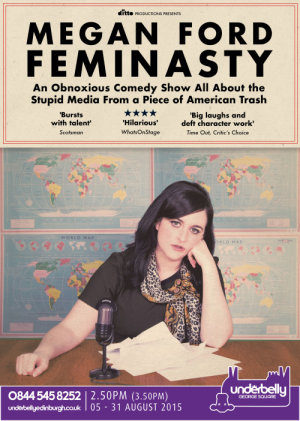 Megan Ford’s debut solo show is a funny and biting critique of all aspects of the media. She combines stand-up as herself with character comedy and throws in a super fun zine to take away at the end as well.

Her stand-up is definitely the highlight. A charismatic performer, she vocalises the frustration of feminists everywhere who just want to consume some quality entertainment without having our hackles raised. The points that she makes are not always original but the statistics and facts about underrepresentation and lack of complex characterisation of women in film, disparities between the ages of heterosexual love interests and failure of news media to engage with female politicians on the same terms as male ones are worth revisiting, especially when Ford is so enthusiastic about effecting change.

The character comedy works less well, even with the fine variety of wigs. Each character seems to have been created mainly for one point, which once made sufficiently leaves the rest of the skit a bit repetitive.

Nevertheless, it’s a fun hour overall, which leaves the audience fired up. (MS) 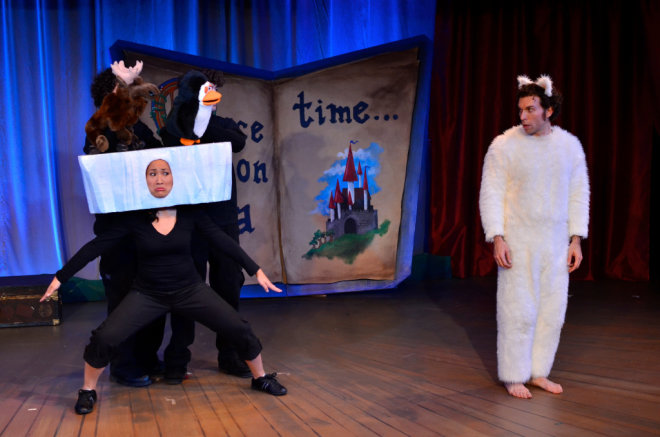 This one has snuck into a feminist round up of comedy slightly by accident, but it made me laugh so it can stay. This was a very strange show: in the main a spoof children’s play with modern morals for our age, singing and some really really weird puppets which has been a smash hit in LA for several years. The show didn’t have a lot to say about feminism, but it did have something to say about equality, plastic surgery and relationships.

The animal costumes that the cast wore were particularly effective, although some of the puppetry wasn’t that good: a chorus line of handpuppet cats featured one that appeared to be in some kind of drunken stupor. The jokes were frequent and were delivered well. Special mention must be given to the two women in the cast: Tina Huang and Courtney Pauroso, who both had excellent comedy timing and commitment. (LL)

The F Word will have our second Edinburgh Fringe comedy post up in a few days.

Image 1: Bridget Christie. Photograph by Steve Ullathorne. A white woman looks directly at the camera, she is wearing a large donkey’s head and has her right hand over her mouth.

Image 2: The Are Not Men flyer. The top half of the flyer is taken up by the title of the show in blue. The bottom half has photographs of the top halfs of Brunning and Roberts, both white women. Brunning is wearing a blue and white jumper and is looking up. Roberts is wearing a red anorak with the hood up and is looking directly at the camera.

Image 3: Megan Ford’s flyer. The title and description of the show is in black writing at the top of the flyer, the bottom two thirds of the flyer is a photograph of Ford. She is a white woman looking directly at the camera with her head leaning on her left hand. She has a script and a microphone on the desk in front of her.

Image 4: From Fairy Tale Theatre: 18 & over. On the right hand side of the photo there is a white man standing dressed as a polar bear. He is looking at a group of actors on the left, they are all wearing black, with one female asian-american actor wearing an iceberg mask and the other actors holding puppets.