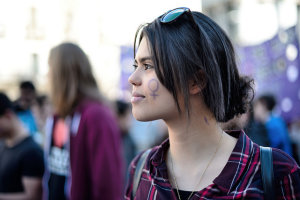 It’s time for another weekly round-up and this one includes everything from Donald Trump to running the London Marathon without a tampon!

A Note to Myself: On Creativity (Girl Lost in the City)

For the first time in years, I feel beautiful (June Eric-Udorie)

From the article: “When I was about 3 years old, I used to run up to the camera. I would open my mouth and smile, exposing the teeth hidden between my Vaseline coated lips. I smiled with my eyes. I didn’t care if my hair was a mess. I didn’t care if anyone else was looking. All that mattered was that there was a camera and somebody wanted to take a photo of my adorable face and I had to smile.”

From the article: “As Toni Morrison’s Beloved illustrates, maternal love defies restrictions based on the intersection of race and gender, and exists beyond patriarchal rules of ownership.”

How to be a badass Muslim female artist (Dazed)

From the article: “The UK is a bubbling pit of fear right now, and #Islamophobia, #ISIS and #terrorism are fast burning up to the top of this millenium’s buzzwords. It’s been a growing pandemic ever since that first plane hit the twin towers back in 2001, then we saw it amongst the carnage of 7/7 and, most recently, on the beaches of Tunisia. Pointing fingers at a whole community out of blind panic seems to be the bandaid solution to ease the troubled Western mind. The impact is real, tragic and nothing short of scary but who’s asking about the effect on the rest of the population, including young and creative Muslims trying to make it through their teens, 20s and beyond without getting abuse hurled at them in the streets, online and in the news.”

The image is used under a creative commons license with thanks to Adolfo Lujan. It shows a person in profile with the ‘Venus’ symbol drawn onto the side of their face. They have dark hair with white streaks which is tied up and they have sunglasses perched on the top of their head. They are also wearing a checked shirt and a gold chain. They are sharply in focus but the background is blurred and depicts other figures. The setting looks to be a rally or a march of some description.