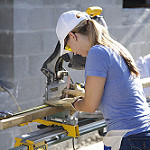 Why do women only make up 11% of the 2 million British construction industry workers?

Lekha Mohanlal, PR Executive at Dickies Store, asks why women aren’t getting stuck in to the booming UK construction industry, because in her view from her experience working with a company in the industry, there’s a lot to like about it.

As a feminist this struck me. Why aren’t women getting their hands stuck in to the laborious work? You only have to log in to Instagram with the hashtag “#fitfam” and you’ll see strong women lifting weights as heavy (if not more) as their male weightlifting counterparts. There has been a significant rise of women in the UK police force in the last year and the number of female footballers in Europe has gone up five times in the last 20 years.

Leadership
Women make up 23% on the boards of FTSE-100 companies. Construction is a lot different to the corporate ladder and you are much more likely to work your way to the top and even be your own boss. Which takes me to my next point.

Flexibility
If you’re your own boss, you can work when you want, including evenings and weekends if that suits you better. A recent article in Stylist Magazine (July 2015) stated that 54,000 UK women are forced out of work due to their pregnancies each year. Out of the women who did take maternity leave, one in 10 mothers said that they were treated worse by their employers after returning from maternity leave. If you do have young children, a career in construction is ideal as you can mould your hours around them.

Mobility and variety
Instead of being chained to your desk from 9-5, your normal working day in construction could be much more active and dynamic.

Pride
Construction has a high job satisfaction rating. Being able to contribute to the landscape of your community is a very rewarding job to have.

Growing job opportunities and money
Ranging from labourers to land surveyors, there is a perfect job in construction to suit all skills. Not forgetting the financial benefits- skilled workers have seen pay soar almost four times faster than inflation. Some plumbers have been reported to earn up to £100,000 a year.

In 2011, The Union of Construction, Allied Trades and Technicians (UCATT), pledged to ensure that women received equal pay for work of equal value, provide specialist support and advice for women seeking to enter the profession and provide everyone with access to lifelong learning. With University fees sky high and the government encouraging enterprise, isn’t it also time to offer women a career in construction from school age? 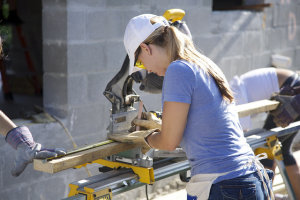 “One of the great things about my job is that I get to work with so many different types of people. One minute you can be presenting to senior management on your ideas to make the project more efficient; the next you’re out with the guys physically doing the work on site, discussing how to improve safety. I also enjoy seeing real progress made as you move through the project- where you now have 30-metre-high concrete walls, six months ago there was just a muddy field. You also might end up working on world class projects.”

Young women need to be able to make informed choices and to do this they need a good understanding of the breadth of opportunity in the sector. Employers and schools need to be brought together so that we can help young women to cross the barricade into construction. Women are under-represented in construction and we need to break these stereotypes in order to change the face of the industry.

Sadly, part of the reason why many women don’t go into construction is because of sexism. Research shows that more than half of female construction workers said they were treated worse than men because of their gender. This is where I believe women should stand proud when they are faced with those “oh, you’re a builder” comments. Being female helps you to stand out and having a strong and positive attitude (like with all forms of bullying) helps repel discrimination. Luckily, there are also networking groups such as Chicks With Bricks which connects young women in the construction industry to their peers and role models.

We’ve all been the woman walking to work in the morning, passing a construction site where we have been cat-called by builders. Kimberly Gallagher (Project Engineer) stated in a Huffington Post article that men often condescend her in the workplace by saying things like “thanks sweetheart”. She replied (with a grin) “No problem sweet-cheeks”. I applaud this jokey retaliation.

It’s time we worked hard to demonstrate that women have an equal place in construction. The role and influence of women needs to grow in order to reduce discrimination. The more capable women enter the industry, the harder it will be for men to think less of their female colleagues.

Lekha Mohanlal is Digital PR Executive at Dickies Store. Dickies Store are a leading workwear supplier and Lekha believes that they recognise the importance of women’s garments in a male-dominated industry. Dickies manufacture the most popular styles of work trousers/ tops and footwear to ensure there are suitable options for female employees and workers.