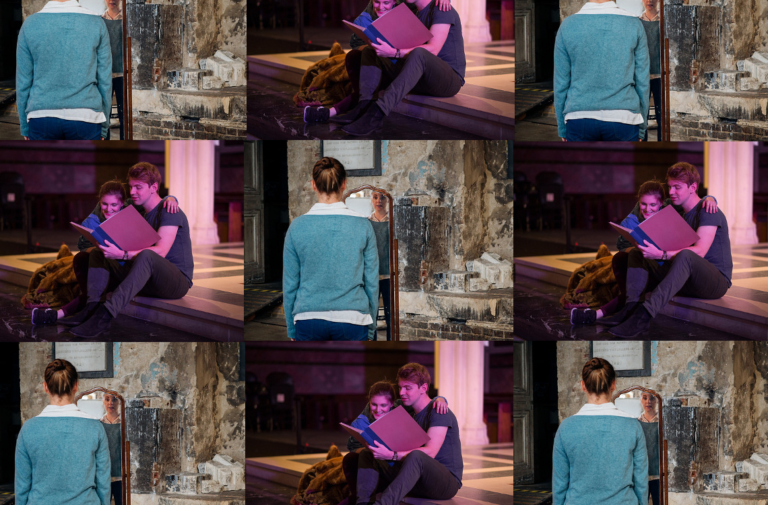 Not very happily ever after 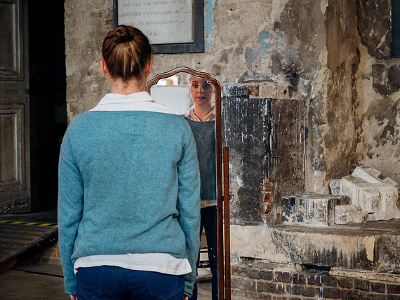 This theatre is one with a difference. In fact, it isn’t a theatre at all: it is the Asylum in the heart of Peckham Rye. It is clear And So Forth Productions picked a harrowing spot to regale us with tales of damsels, wives and witches.

The location sets expectations high; the play must be fascinating to warrant such an interesting place to tell the story. With audience on both sides and the performers in the middle, a challenge has been set for the actors to prove their mettle and make sure all members of the audience can see their performance. The plot is bare bones simple in set up, with Danielle Winter (Her) and Adam Drew (Him) as a supposedly loving couple exploring a house that she has inherited. That is really it, without giving too much away, but with a simple yet tasteful stage setting of dusty old books and moth-eaten sheets, they play on the theme and evoke a childlike curiosity of what waits ahead.

The first performer to appear on the stage is a mezzo-soprano opera singer called Katie Coventry. Her voice is a beautiful complement to such a captivating stage setup and venue. As the play progresses, her performance becomes ever more striking and her facial expressions nicely convey the emotion of what she is singing. However, the musical sections would have been very confusing if I hadn’t been given a programme explaining their lyrics – a solo piece in which the singer sings “Toes…ten of them!” makes no sense without the link to fairytales clarified. This renders these surreal musical interludes somewhat pointless unless you decided to buy a programme. The creative choice to have the majority of the play in a more typical, narrative style works but jars with the musical sections.

The writers bring us along a road and then decide to keep turning back, walking us down the same road again and again

As the play continues, the subjects of Damsel and Wife are explored. Questions such as “What do woman want?” and “Why do men feel the need to protect and divide?” are raised throughout. Danielle Winter’s performance is interesting because she becomes less and less likeable the more we know about her. Her lack of certainty starts intriguingly enough, but it rapidly becomes infuriating as it is clear that she makes no progress from these feelings and only goes around in circles. Adam Drew as Him turns from good to bad on a whim, possibly to suit the temperament of Her, but it feels like the play is treading water and never really answers the questions it posits. Nevertheless, the actors clearly have great chemistry and show talent with ferocious and often sinister performances. 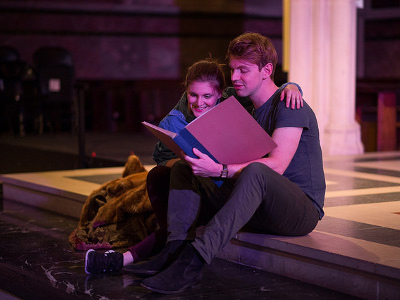 As for the play itself, it succeeds on some levels. It certainly raises questions, just possibly not the ones they intend. My biggest question is: where is the Witch of the title? She is never discussed or brought up, and the audience is left largely in the dark over her. Each term mentioned in the title is brought up in turn and is dissected by the actors. The nature of the Wife and Damsel are meditated on for the majority of the first act, but the expected examination of the term Witch never happens. The story is excellent at building tension, but it feels like the writers bring us along a road and then decide to keep turning back, walking us down the same road again and again. While they clearly did their research on why fairytales were told, they do not quite deliver when it comes to connecting these ideas. The only fairytale that gets name-checked is that of Bluebeard, but no others are even mentioned or explored outside (once again!) the programme.

I am praying for a twist… instead of the fairly typical ending where the good guy turned out to have been bad all along for which the play settled, I am hoping for a clever ploy. Perhaps the wolf could turn out to have been Her and she would be the one that your mother warned you about, as opposed to the man as you might expect. I feel a little disappointed when Her screams: “We are always afraid, that’s why we look!” This is clearly meant to resonate but in actuality this is just one of many generalizations around gender that become increasingly grating towards the end of the play.

I want more from feminist theatre; I want deeper ideas. This play is just scratching the surface of fairytales by utilising the old stereotypes of men not understanding women and women getting frustrated and eventually getting struck for speaking out. It would have been nice to see something more complex, something that as a feminist I could have sunk my teeth into. It is clear that there is a lot of talent from the cast and crew, with some creative ideas and chemistry-laden performances as well as some marvellous theatrical turns and lovingly performed musical interludes, but for me it was the story that let it down.

Damsel/Wife/Witch was performed at the Asylum in London on 15-18 September, 2015.

Photos are by Marianne Chua and are from the production.
Image 1: A standing woman is photographed from behind. She is looking into a standing mirror; in this the viewer can see her face. She is in a room with exposed stone/brick walls.
Image 2: A man and a woman sit with their arms around each other, reading a large book together.
A collage of the photos is used for the feature image.