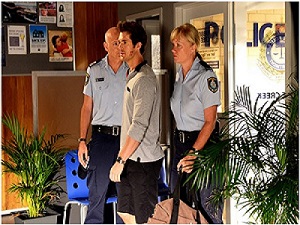 Rosa Walling-Wefelmeyer is unimpressed with Home and Away’s recent storyline about a false rape accusation because of its potential to reinforce harmful stereotypes about victims. Besides, it’s just not that original – or entertaining.

So, after some careful consideration, Home and Away have just introduced the False Rape/Assault Accusation Trope (FRAAT) into their waters. That shark’s sure gonna cause some serious mayhem for all the good men of Summer Bay, ripping up their respectable lives and swallowing the whole tanned-torsoed community’s trust in humanity… or just women actually. Strewth! Billie Ashford, you good-for-nothing liar, you have a lot to answer for. 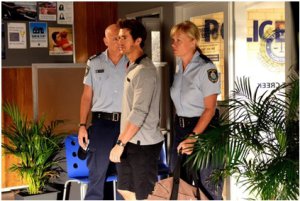 So, in fact, do the writers. Some years ago I watched Dani Sutherland run her rapist over with a car and Charlie Buckton kidnapping hers in hope of a confession (there may have been some FRAATing and abuse storylines in the Bay since, but my loyalties have undergone changes). Imagine my surprise and disappointment therefore on tuning in again recently to see Billie Ashford falsely accuse Doctor-Could-I-Be-Anymore-Perfect-Nate Cooper of sexual assault out of revenge for rejecting her (because of course a man’s rejection is just so damaging to a young woman).

After experiencing an initial sense of déjà vu, I’m embarrassed to say I assumed the plot’s intention was more intelligent – that’s right, I actually thought the trope was being introduced to be challenged and subverted. Silly me.

“Soaps aren’t meant to reflect reality”, I hear you say (sure, and I live in a fairy sun and surf world where all cultural and media output is totally apolitical), but certain storylines, or in this case, rape myths, do seem to keep doing the rounds. Considering that sexual violence is universally underreported and victims often cite fear of not being believed as a key reason for not disclosing, it is interesting how often and with what sensationalism FRAAT keeps popping up in our media channels. Especially considering it’s no more common than other types of ‘false’ accusation.

Woman/girl is evil/disturbed and is obsessed with/rejected by likeable white heterosexual male. Said male is then accused of assaulting her and loses his respectability/family/job etc. Storyline continues until shots of said male brooding in police stations are exhausted, sympathies have been well and truly milked and the woman/girl is exposed as the devil incarnate. Various characters, usually wives/girlfriends, undergo a crisis of faith followed by guilt as the truth is revealed.

Is it any surprise that victims of sexual violence are fearful of being disbelieved?

This trope also gets it wrong because, in order to bring outraged sweat to audience foreheads, the false claim must be believed and the community must turn against the alleged perpetrator. This, as we know, is simply not the case; there are too many stories of women and girls being persecuted after making their allegations because no one wanted to believe them and their communities actually turned against them. Indeed, in an age where thirteen year-old sexual violence victims are described as ‘predatory’, the message seems clear: ‘Victims’ bring it on themselves or just tell lies to ruin lives. Don’t believe them.

The mythical ‘scorned woman’ will do anything to undermine a good man. Watch out fellas, she’s smart; Billie even got Nate’s DNA behind her nails, used his phone to send a sexually explicit text and tried to make a witness out of another of the Bay’s good guys, Chris Harrington (a moment of pity for honest misled Chris please). See, it’s not just the accused caught in deep water; in Nate’s case it also almost cost him his partner Kat Chapman, her police job (officers actually care about injustice apparently) and his own medical job (didn’t get your blood transfusion or liver transplant? Well, blame Billie the Shark: the cause of everything).

Who knows what will happen? Perhaps the writers will try and throw their plot a lifeline and explore Billie’s character and her false accusation more carefully – Lonsway et al.’s look at what actually constitutes ‘false’ or the recent concerns over prosecuting ‘false’ claimants rather than sex offenders might be of some interest here. But, I’m not holding out. Perhaps it’s just easier to re-use tropes about lying women than to depict abusive men.

So, I’ll be prepared to watch Nate versus Billie when you show me some more sensitive and representative sexual violence storylines alongside it. And no, as cathartic as watching Kane Phillips meet Dani’s car was, that’s not what I have in mind.

We all love a story of wrongs righted, injustice resolved, the truth outed. But we are watching the wrong channel. This particular channel is happy to let an old myth snap at our heels. Too bad the world’s not just sun and surf after all.

Image attribution: Photo of Home and Away character Nate Cooper is permitted for public use by Channel 5.