Nothing feminist to detect? 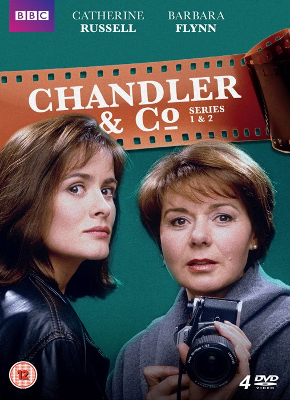 Chandler & Co first aired on BBC1 in 1994 and ran for two series. Written by Paula Milne, (The Hour ad The Politician’s Husband) it stars Catherine Russell as Elly Chandler, recently divorced and starting up her own private detective agency, having used one herself to catch her cheating husband, Max (Christopher Bowen). Elly teams up with her ex’s sister, Dee (Barbara Flynn), whose loyalty lies with her friend and sister-in-law rather than with her brother. Elly is confident that their “women’s intuition” and willingness to offer comfort (“tea and sympathy”) to their clients will give them an edge over their male counterparts.

Episode one sees the two women take on their first case. This is where I begin to feel disappointment, as the show sets up two women in leading roles, which seems relatively progressive for the time, only to fall back on lazy tropes and stereotypes, with the main characters going to a man, Larry (Peter Capaldi), for guidance and technical support.

Larry is the PI who helped Elly catch her cheating husband and also gives them their first case, agreeing to split the fee 50/50. The juxtaposition between the two middle-class, technologically unskilled women with the ‘edgy’ working-class Larry is supposedly meant to provide the tension (which is also sexual between Elly and Larry). It is also seemingly meant to provide the humour, with Larry’s exasperation at Elly and Dee’s lack of technological knowledge and sense of direction. For example, as they sit in Elly’s car staking out their client’s husband, Larry tells them they are facing the wrong way, a joke that is repeated in a later episode. (Coz, you know, women are bad at directions!) But Larry’s supposed deep technological expertise seems to extend merely to the various different ways you can hide a bug in someone’s house, such as in a hollowed-out book or a pocket calculator. His other skills include slicking back his hair and putting on a hilarious Cockney accent to disguise himself as various workmen in order to plant his bugs. This happens more than once.

Rather than the strong independent character I expected, Elly is portrayed as quite wide-eyed and naïve

Not funny enough to be a comedy, nor dramatic enough to be considered drama, Chandler & Co falls somewhere in between and ultimately fails to keep me gripped over the 12 (six per series) hour-long episodes. I can only assume some of the cast members felt the same during filming as, by series two, both Peter Capaldi and Barbara Flynn, who play two of the three main characters, have quit, with little explanation of the fate of their characters.

Again, most of the ‘humour’ comes from Larry. This consists of one-liner gems such as “You stick out like tits on a monk in this thing” and “He’s been dipping his wick in the nookie jar.” Attempts at gritty realism also fall rather flat and comprise scenes of areas such as the red light district of King’s Cross, all dry ice and mini-skirted sex workers with 1990s big hair, and a council estate full of ne’er-do-wells, smoking and kicking abandoned fridges to a soundtrack of barking dogs. The kinds of scenes within which most of the action takes place are just a bit too stagey and obvious, clearly viewed through the prism of comfortable middle-classness. “There are more important things than dinner party chitchat,” Elly says at one point, which kind of sums up the whole show.

The blurb on the back of the DVD describes Elly as an “independent lady” who “takes down misogyny as she reprimands cheating husbands and humiliates sexist clients”, seeming to reduce the definition of misogyny to “men who cheat on their wives”. And rather than the strong independent character I expected, Elly is portrayed as quite wide-eyed and naïve. In one episode, she approaches the task of going undercover as a prostitute on the streets of King’s Cross’s red light district (remember, this was 1994) as if she is on her way to a tarts and vicars party at the local village hall.

And despite believing herself a good judge of character, Elly also has significant blank spots when it comes to her slimeball ex, who she almost takes back before she finds him cheating yet again. She is even almost taken in by one of her clients’ sleazy husbands while working undercover at a posh speed-dating event.

Elly’s biggest example of skewed judgment, however, relates to love-interest Larry, who she keeps at arm’s length, despite their mutual attraction. Ultimately, I find the character underwhelming and uninteresting, as her story arc traces a well-worn trope for female characters; driven by hurt and jealousy, she is unable to trust any man, but her loneliness (she is a single woman after all!) sometimes causes her to let her guard down. However, she can’t see that the right man has been in front of her all along. In true rom-com style, Elly and Larry get it together in the end, but only after he appeals to her to end her “tireless crusade to prove that all men are irredeemable shits”.

I find Dee’s character more interesting. At the beginning of the series, poor Dee is little more than a joke to her, frankly horrid, family. Her permanently hungry children seem to see her as merely a provider of food, complaining loudly at the first sign of a stomach rumble. Her husband, David (Struan Rodger), has Victorian views on marriage and believes her role is to take care of the domestic sphere and give their children “hope, values, love”.

David takes it as a personal betrayal that Dee now has interests outside the home and sees Elly as a threat to the domestic sphere. He is openly hostile to Elly whenever she shows up at their house, while remaining overly friendly to her cheating ex. As an independent single woman, Elly represents the outside world David wants to protect his family (including Dee) from but, as Dee says, she has been “vacuum sealed” and now wants something more. “I don’t need protecting” she tells him. She also says she wants to “make a difference to someone’s life, outside these four walls”. David accuses Dee of “getting off on it”, equating her career with pursuing a sexual life, revealing his real fear: that she will chase a life of sexual adventure away from him.

Overall, while the cases the women take on in Chandler & Co occasionally touch on quite serious issues (AIDS, prostitution and drugs), the way these issues are handled feels quite false. Again, everything is rooted in a comfortable middle-class world. The things the show has to say about sexual equality also don’t quite follow through enough to make any serious feminist points. There are some interesting elements in Chandler & Co but, in the end, there just isn’t enough substance to it.

Chandler & Co is out on DVD now

DVD cover for SimplyMedia October 2015 release of series one and two.

This shows Elly on the left and Dee on the right, against a jade green backdrop. Both look directly into the camera. Elly wears a black leather jacket and looks over her right shoulder, with an intense expression, while Dee wears a grey winter coat and holds a camera. ‘CHANDLER & CO, SERIES 1 & 2’ is written on an orange film strip just above their heads and the names of the actors, Catherine Russell and Barbara Flynn, are at the top of the box design and lined up above the characters in question. (The purple BBC logo is in the top left corner, the ‘12’ rating is on the bottom left and the ‘4 DVD Video’ logo is on the bottom right.)]